At the beginning of the week, the City of Hawthorne’s annexation of about 1,200 acres of Plum Creek timber company’s land looked like a done deal.

Despite a last-minute push by city and Alachua County residents to get three Alachua County commissioners to change their mind, that’s still the case.

For background: more than a dozen Hawthorne residents showed up to a county meeting Tuesday night to protest a decision some said they knew little about. After finally discovering what was planned for their city of about 1,500 people, residents had plenty to say.

In response, the board — minus absent commissioners Lee Pinkoson and Charles Chestnut IV —  voted late Tuesday to hold Wednesday’s meeting, where dozens attended.

Why the urgency to hold such a meeting?

Thursday, Dec. 17, marks the deadline for the county to challenge the city’s annexation.

And so at Wednesday’s special meeting, a vote to open a legal challenge against the tiny city’s annexation of the corporate-owned lands failed in a 2-2 vote.

Pinkoson fired an opening shot Wednesday night, saying he was “pissed off” about how the meeting had been scheduled in his absence; Chestnut was absent on Wednesday, too. Pinkoson said he had to leave after 90 minutes but decided to stay to cast his vote, along with Robert Hutchinson, against a challenge.

The county’s challenge would have centered on the location of two of the five separate tracts of Plum Creek’s land that would become part of Hawthorne. County attorney Michelle Lieberman said, in her legal opinion, Area C and Area E do not border the city extensively enough to allow annexation. 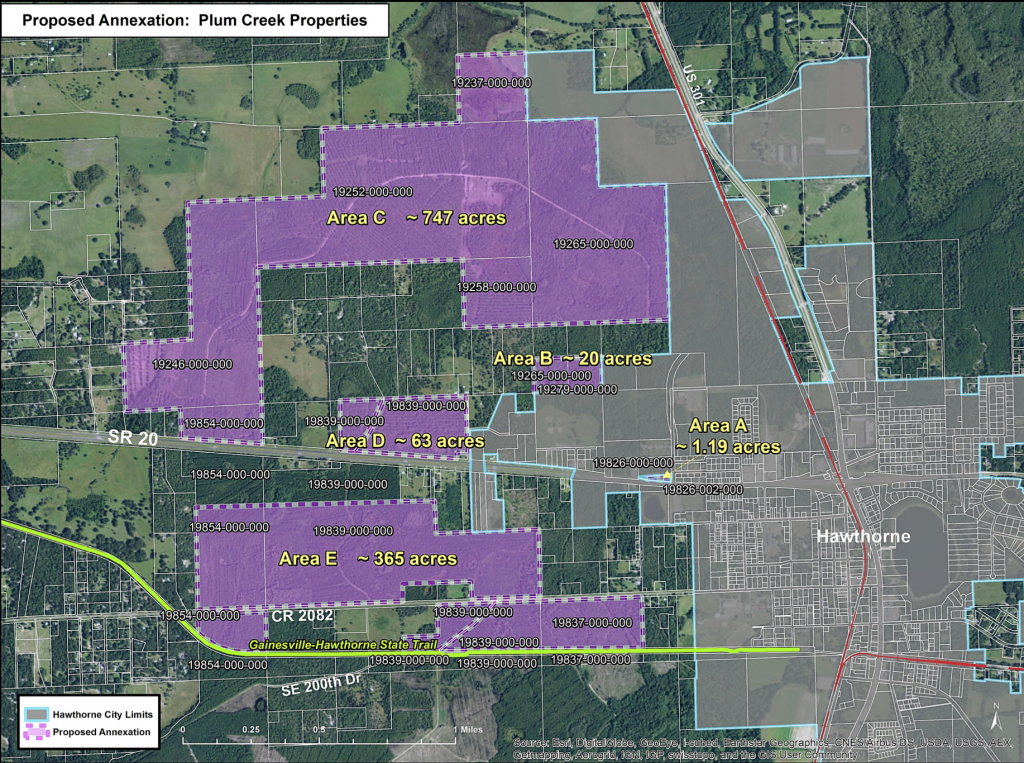 A 25-year-old special state law regarding annexation is designed to unify a city, according to a county planner who spoke Wednesday. He illustrated the very small area where Area E will border the existing city line.

And it’s generally “better for taxpayers if you don’t create islands within cities” where public safety services such as fire rescue and garbage collection need to be provided, commissioner Mike Byerly said Wednesday night.

Pinkoson later challenged that argument, noting that the county currently provides services to those areas. That won’t change after the annexation under this plan — unless Hawthorne gradually grows large enough to provide its own fire rescue, police and garbage collection services.

More than 30 people spoke during public comment, with the vast majority of Hawthorne residents opposed to annexation.

“To speak on Hawthorne and you don’t live there… that’s a farce,” resident John Beasley said.

“I don’t know whether I agree or disagree (with annexation), because I don’t know what the heck is going on,” Beasley said. The issue of whether proper notification had been provided for people living near the proposed development came up repeatedly.

Hawthorne Mayor Matt Surrency, along with others in favor of Plum Creek’s plan, said plenty of notice and opportunity to influence the decision prior to Wednesday had been given.

“We have a great opportunity to develop a community that is dying on the vine,” said Susan Baird, a former county commissioner who supports Plum Creek’s plans. “Please do not challenge the annexation.”

In the end, the county commission followed her and the city’s wishes, but not before hearing this type of sad story from people like Angela Moore, who lives in Hawthorne.

“It feels like this whole Plum Creek thing has almost tore our community into two. We see people in the store, they know you’re for it or against it, they won’t even wave at you any more.”