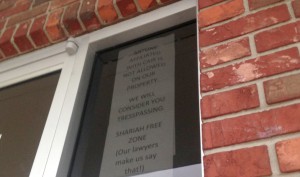 A judge on Friday dismissed a lawsuit filed earlier this year against Florida Gun Supply after the owner declared his store a “Muslim-free zone.”

The judge said the plaintiff, Counsel for American Islamic Relations (CAIR),  could not prove discrimination against any of its members at the store, but the judge did acknowledge that the Muslim-free zone policy could be a violation of Title II of the Civil Rights Act.

“I have a right to sell guns to whomever I please,” Hallinan said.

The group plans to file an appeal next month. But Hallinan is celebrating the dismissal for now.

“My message for CAIR today: justice has been served and victory is sweet,” he said.

He said he believes there are peaceful Muslims on the planet. Still, he said he cannot arm and train a person who believes in his or her heart it’s the right thing to kill religious unbelievers.

Thania Diaz Clevenger, civil rights director for CAIR Florida, said the lawsuit has given the organization an opportunity to work on an appeal. She said the suit is not about CAIR. It’s about the Muslim community being denied a basic right to enter a store. She compared it to the whites-only signs at restaurants, restrooms and other public establishments back in the 1950s and ’60s.

“The complaint wasn’t dismissed on the merit. It was just a jurisdictional issue,” Diaz Clevenger said. “Regardless of what his feelings personally are toward the organization, he’s denying a right that’s entitled to the public at large.”

Ariana is a reporter for WUFT News and can be contacted by calling 352-392-6397 or emailing news@wuft.org.
Previous Food Allergies Among Kids On The Rise
Next UF International Student Celebrates Thanksgiving Feeding Homeless