When Will That Clock Tower In Gainesville Tell Time Again?

By Ali Schmitz and Ethan Magoc

It’s more than a mechanical failure that has caused the downtown Gainesville clock tower to be consistently out to lunch.

The roof of the clock cupola leaks.

And earlier this year, the clock stopped moving.

“We did get some reports that people weren’t hearing the chimes at the proper times,” Ed Gable said. He’s in charge of the city’s facilities and oversees maintenance of 100 city buildings. He started the job Sept. 1 and worked for two months to catch up on other problems for which his department is responsible.

Some of his focus now turns to the clock tower, which has two issues: 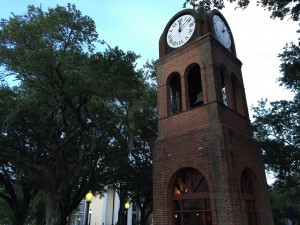 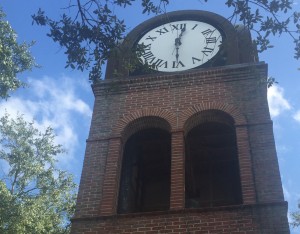 Mostly stopped — the hand appears to have advanced 20 minutes since the June photo on the left to today.

The city will likely contract in the coming weeks with an architect to determine the extent of the work. Woods and Gable could not say yet whether the work would be extensive enough (more than $2,000) to require a competitive bidding process.

Ali is a reporter for WUFT News and can be contacted by calling 352-392-6397 or emailing news@wuft.org.
@SchmitzMedia
Previous Pride Center Pays Taxes, Extra Costs Through Online Fundraiser
Next Gainesville Retailers Prepare For Small Business Saturday