The world may be a little bit too connected.

Or at least that’s the view of five-year Best Buy Mobile employee Terrell Johnson, who has been working at the Oaks Mall in Gainesville since April.

“Their lives revolve around their cell phones,” he said of his customers. “They need their phones.”

Johnson said that when customers come in with broken phones they are often angry, upset and even anxious.

“No one remembers numbers anymore. It’s all saved in their phones,” Johnson said, making the loss of their phones, even temporarily while they are serviced, a very large loss in social connection.

Johnson may be on to something, according to a TIME article released earlier this year with suggestions on how to “battle smartphone addiction.”

The article cited a study which showed that the loss of smartphones in a controlled area caused anxiety within a young person when it rang just out of reach. Some 40 cases were studied, and each young person had a physical reaction such as elevated heart rate, self-reported anxiety and lower cognitive function.

Nomophobia, or no mobile phobia is the fear of being disconnected from a mobile device like a smartphone. But according to Robert Leeman, associate professor with the Department of Health Education and Behavior at the University of Florida, the use of the word “addiction” may be preemptive.

Leeman has done research concerning behavioral addictions and said some of the principles between that and smartphone addiction are the same.

“There is certainly an instant gratification aspect to it,” Leeman said. Messages and notifications can be seen as reinforcers which are things that increase the likelihood of subsequent response.

“Text messages and emails from friends are reinforcing and potentially rewarding as well,” he said. “They might make us happy and give us positive feelings, which increases the chances that we will look at our phones again and again.”

Leeman said that more evidence and studies are needed to consider smartphone addiction to be a real behavioral addiction.

“There are certainly principles there that parallel addiction, spending time on whatever the behavior is at the compromise of other important behaviors, having the feeling that you have difficulty stopping or a compulsion,” he said.

Gambling disorder has culminated enough empirical data to be added to the most recent Diagnostic and Statistical Manual of Mental Disorders.  Leeman said that this could leave the door open in the future for other behavioral addictions, like smartphone addiction, to be similarly recognized as mental disorders as well.

Leeman said it should be noted, however, that addiction cannot be a byproduct of another condition, which makes the case for proving smartphone addiction even more difficult.

Furthermore, not as a psychologist, but as a soon-to-be-teacher, Leeman worries about the loss of formalities among the maybe-smartphone-addicted.

“Conversations that should happen one on one, I worry about younger folks being reticent to have those and what the ramifications of that will be when folks try to get jobs,” he said. “I think, probably all the technology, I don’t know that it’s harming, but it’s certainly not helping students have those kinds of conversations.”

Cousins Alex Cervinka and Randy Rivas are both philosophy students at the University of Florida who elected to get rid of their smartphones in lieu of old-school flip phones over a year ago, because they share Leeman’s concerns for the lack of social skills in their generation.

“The other day I was sitting on the bus and everyone on the bus was glued to their phones,” Rivas said.

Cervinka said he lives a more relaxed life not being engaged with a smartphone, but he sees the way smartphone culture affects his generation.

“You know I have to like explain this to girls when I meet them, I won’t text back right away,” he said. “Most of the girls I talk to, if I give them a phone call they freak out like ‘oh my god he wants to marry me!’”

Rivas said he has never engaged with smartphones and social media the way others in his generation do, and he would prefer to only have a phone that made voice calls.

“I think people really do think they need their phone. Whenever they see me pick up a phone call, ‘Is that a Razr, is that a flip phone?’,” Cervinka said. “They all say, all of them say, ‘I wish I could do that,’ as if they can’t, as if they are addicted to it.”

Leeman said that the change in social interaction is just the way those engaging heavily with smartphones communicate, “for better or worse” and that as more sophisticated technology arrives, these behaviors are likely here to stay.

He predicts that a new norm will emerge as the immediacy of communication continues to be the expectation with newer and faster technology.

“Is it going to get to a point where our expectation to hear a response from someone gets to a point where it’s not acceptable anymore to say ‘Oh, I was at my kid’s soccer game,’ or ‘I was out to dinner with my family?’” Leeman asked.

Destiny is a reporter for WUFT News and can be contacted by calling 352-392-6397 or emailing news@wuft.org.
Previous Nov. 17, 2015: Afternoon News In 90
Next Pasco Body-Worn Cameras Bring Transparency, Inspire Other Counties 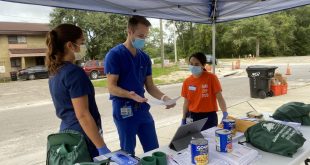 As the temperature drops this winter, so may the availability of supplies for homeless shelters …