Fall is in full swing, but summer’s pesky mosquitoes have yet to call off their assault.

This year’s abnormally long mosquito season has forced insect control departments in Putnam and Hernando counties to work through October and into November.

Both counties are extending their efforts to protect people from the pests and the diseases they carry.

Bob Hatton, mosquito control director for Putnam County, said his department would likely have to continue spraying and treating for mosquitoes into November for the first time in years.

“It’s funny, it doesn’t really follow any great pattern,” he said. “It’s some correlation between the rainfall and the water level.”

Florida’s mosquito season started at the normal time with the first reported human case of West Nile Virus in June in Walton County, meaning the mosquitoes were already active during their prime months. But the season should have started to die down by September, said Sandra Fisher, Hernando County Mosquito Control director.

Instead, that’s when the season started to heat up.

Hernando had its first positive tests of West Nile Virus during September and first days of October, according to the Florida Department of Health’s weekly arbovirus surveillance report.

Because chickens can catch West Nile Virus but aren’t affected by it, many counties use them to test for the presence of the virus.

Both Hernando and Putnam counties had chickens test positive within the last three weeks, meaning humans run the risk of contracting the disease as well.

“A sentinel chicken, it’s kinda like the canary in the coal mine, it tells us there’s infected mosquitos in the area, and so we focus our spraying, targeting the area,” Hatton said.

Hatton said he believes this year’s rainfall and the changes in the water table are the reason why ponds that have been dry for years are suddenly filled with water and breeding bugs.

“Because they dried up in the past, all the predators that would normally live in the water are gone,” Hatton said. “When the water table came up and the water doesn’t have anywhere to drain, now we’ve got mosquitos and they’re having a wonderful time.”

This summer was both wetter and hotter than normal, said Jeff Huffman, chief meteorologist for the University of Florida. This August was the fifth wettest on record in Gainesville, and the area has had higher temperatures for eight straight months.

“[In] July, August and September, we had above normal rainfall for that three-month period,” Huffman said.

The rainy season ended at its normal time, but Huffman said he assumes the rainfall has collected and turned into the excessive standing water that has become mosquito breeding ground.

As a result of the excess rainfall, pastures in Putnam County have had standing water in them for nearly a month. Mosquitos only need 7-10 days to breed, Hatton said, so it’s no surprise the bugs are still swarming.

Putnam and Hernando counties have both released advisories to residents alerting them of possible danger concerning the mosquito population.

West Nile Virus, an arbovirus transmitted by mosquitos, is a common concern when mosquito populations rise during hot, wet periods during the year. It has little effect on most people, but about 1 percent of those who contract the disease experience neurological damage and risk of death, according to the Florida Department of Health.

By any measure, Florida has not been hit that badly by West Nile Virus this year. But it has been a national problem, especially in states such as California, Texas and Arizona, according to CDC data. 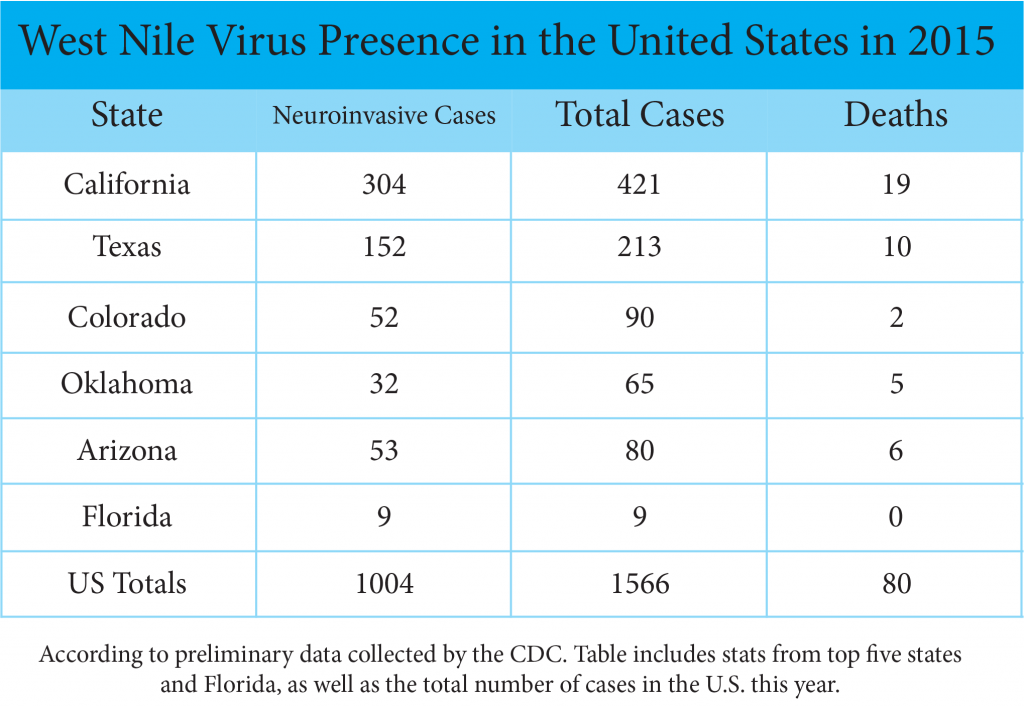 Hatton stressed that people need to be aware mosquitos are out there, ready to attack with everything they’ve got, whether it’s West Nile Virus or just a rather annoying bite.

“There’s a mosquito out there with your name on it,” Hatton said.

Oscar is a reporter who can be contacted by calling 352-392-6397 or emailing news@wuft.org.
Previous Gainesville Chooses Patticakes As Bo Diddley Plaza’s New Cafe Tenant
Next Nov. 3, 2015: Afternoon News in 90