Celery and dill are Greg Cooper’s secret for the perfect seafood chowder.

Cooper has been making chowder for more than 12 years, and on Sunday his recipe won first place for the Reef restaurant.

Close to 30 restaurants participated in the 31st Great Chowder Debate, organized by the St. Augustine Shrine Club, at the Conch House Marina in St. Augustine to raise funds for the Shriners Hospitals for Children.

“(The club collects) money for the hospital, last year it was like $38,000, and people really like to help,” said Elaine Maguire, a St. Augustine resident.

She has attended the chowder debate for more than 20 years with her family. Her granddaughter has worked with the Rainbow for Girls organization, which sells soft drinks and water at the event, and her ex-husband is a long-time Shriner.

Patrick McGrath, the area sales manager of AmeriGas, an event sponsor, was handing out spoons with his company’s logo to the visitors.

“They’re not just spoons, they’re collectibles as I keep saying,” McGrath said. “We have around 2,500, and we will give them all (out) in less than two hours.”

Approximately 5,000 people came to the event, McGrath said. This is one of the biggest crowds he’s seen in the eight years AmeriGas has sponsored the chowder debate.

“AmeriGas sponsors a lot of stuff in town, but this is the biggest event we sponsor,” he said.

The event has four categories of chowder: New England, Minorcan clam, Minorcan conch and Seafood chowder. A panel of judges from the St. Augustine Shrine Club selects the winners for each category.

The Minorcan style chowder is a St. Augustine tradition, Greg Cooper said. His favorite is still the seafood style. The spicier Minorcan chowder is different from the classic milk-based chowder, like the New England style.

“The seafood chowder came from playing around with recipes and trying different ingredients,” Cooper said.

His recipe combines crab, shrimp and, of course, clams.

Elly Larkin, the event manager for O.C. White’s Restaurant, said the restaurant has participated in the chowder debate for 18 years.

“We are number one when picking spots because we’ve been coming for a long time,” Larkin said.

O.C. White’s is a family-owned restaurant, so their New England clam chowder comes from a family recipe, she said.

Mark Smith and David Butterfield from Oviedo, Florida, come every year to the chowder debate with family and friends.

“We love it,” Smith said. “We take our boat up to Jacksonville for the (Florida-Georgia) game and stop by St. Augustine on our way back every year, it’s our little tradition.”

Sofia is a reporter for WUFT News who may be contacted by calling 352-392-6397 or emailing news @wuft.org
Previous Rep. Richard Nugent Announces His Retirement From Congress
Next Ocala Mayor Kent Guinn Denies Ku Klux Klan Ties 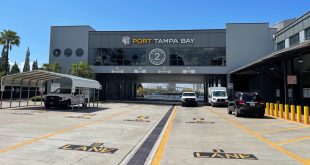