Donald Trump may have finally met his match. In Halloween costume sales, at least.

“Everyone still wants to be superheroes,” said Megan Garlend, an Ocala Spirit Halloween store manager. “Marvel Comics characters and Batman. We see a lot of people coming in for Trump, but the superheroes are still the most popular.”

Americans are projected to spend nearly $7 billion on the holiday this year, according to the National Retail Federation. A lot of that money will come from pop-up Halloween shops, like Spirit Halloween and Halloween Megastore.

There are over 1,700 temporary costume and decoration stores throughout the country, and more than 100 in Florida alone.

Once the season of Halloween sales rolls around and stores open, staffs of temporary workers are brought in to run the shops. The hiring process moves as quickly as costumes fly off shelves.

“I saw a flier outside of the store, went online and applied and got a call about a week later and was hired that night,” said Holden Howard, a Gainesville Spirit sales associate.

Garlend says it’s the effort from those temporary workers that allow the pop-up system to succeed.

In order to keep up with a continuously growing market, some companies also have staff working full time.

“We pick out the stores in May or June, start setting them up in July or August, open September first, then close November 15th, and we break down the store after that and take everything back to our warehouse,” said Gainesville Halloween Megastore manager Caesar Kakol. “People always ask what do you do after Halloween, they’re surprised it’s a year long job.”

According to Kakol, the most important part of the whole process comes in the spring, when companies begin looking for vacant spots to open up shop.

“It’s all about location,” said Kakol, whose store sits on NW 13th Street. “You can tell we picked a good spot, because last year it was only us and one other store. Now there are two more right around the corner.”

It’s clear why those involved are able to provide such service.

“I love Halloween, it’s my favorite holiday, and I get to wear cool Halloween stuff,” Howard said.

Connor is a reporter for WUFT News and can be contacted by calling 352-392-6397 or emailing news@wuft.org.
Previous Thirteen Injured In I-75 Traffic Accident In Columbia County
Next UF Cornhole, Cart Races Raise Money for Charity 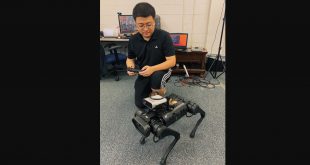