The Wooly has been preparing for months. Thousands are coming to claim the Aluminum Throne tomorrow.

The downtown bar has 12,000 Pabst Blue Ribbon tallboys, or 500 cases, stacked up in the shape of a throne in its compound. This healthy amount of brews were ordered for the crowds of the three-day music festival, The Fest, which begins tomorrow.

Twenty-one venues downtown will be participating in the 14th annual Fest this weekend.

The Fest website states that 21,888 wristbands were sold over the three-day festival last year. The largest venue, the open-air Bo Diddley Plaza, hosted 5,500 music lovers at its peak attendance.

“Last year, Wolf-Face played an impromptu show at our shop,” Long said. After the show, all of the members of the band got their backsides tattooed.

Another tattoo artist at Iron Lotus, Ron McVicar, said that many people get tattoos for Fest, so they will be extending their operating hours. 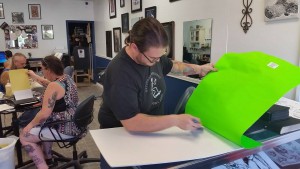 “It’s like that river in Australia where once a year swarms of fish swim downstream as the crocodiles wait to feast,” McVicar said, comparing crocodiles to businesses waiting for customers.

The music kicks off Friday afternoon and will continue until the early hours of Monday morning.

There are 401 bands listed on the website’s lineup for the weekend. Fest announced yesterday that Desaparecidos will not be playing due to singer and guitarist, Conor Oberst’s recent hospitalization.

The Fest website predicts that more than 10,000 people will attend this year.

Jake is a reporter who can be contacted by calling 352-392-6397 or emailing news@wuft.org.
Previous A Downside Of Country Living: Roadside Birth
Next Southern Charm Paranormal Investigations Provides Unique Services in Starke