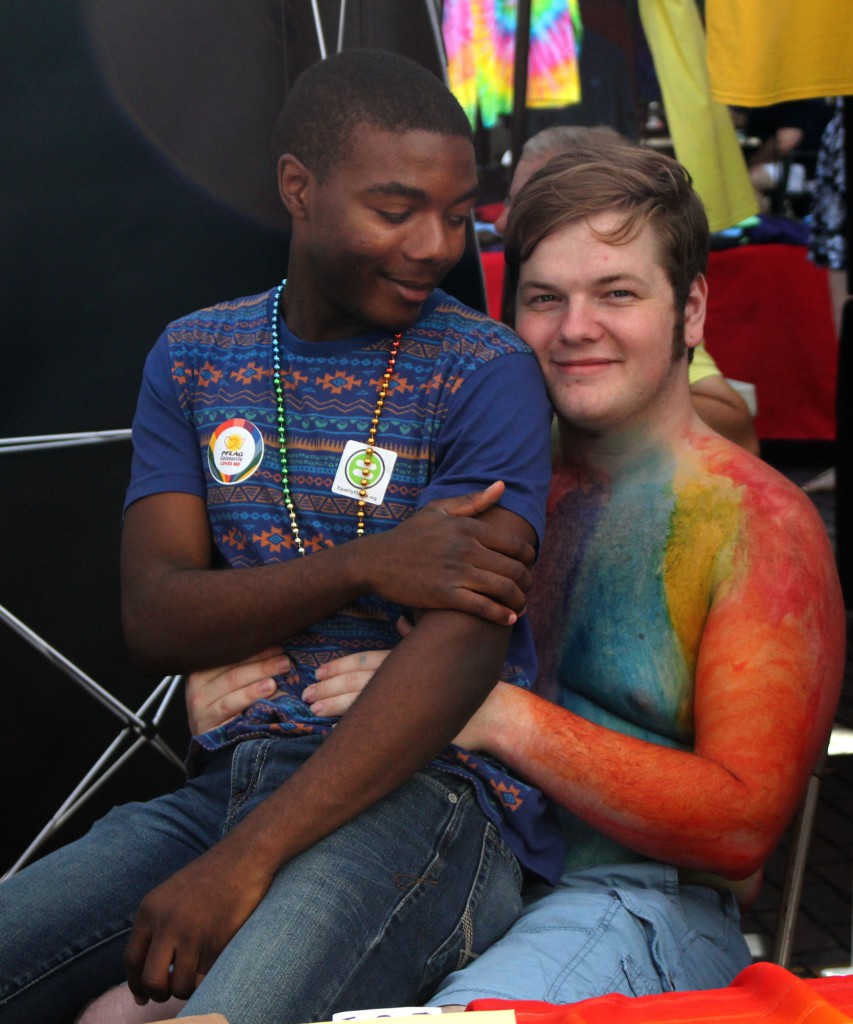 Taylor Marshall (left) and Chris Pippin (right) hug each other at the Gainesville Pride Festival on Saturday. They were behind a booth set up by Gainesville Equality Youth, an organization aiming to make Gainesville a supportive space for LGBTQ+ youth. Oriana Bravo/WUFT News 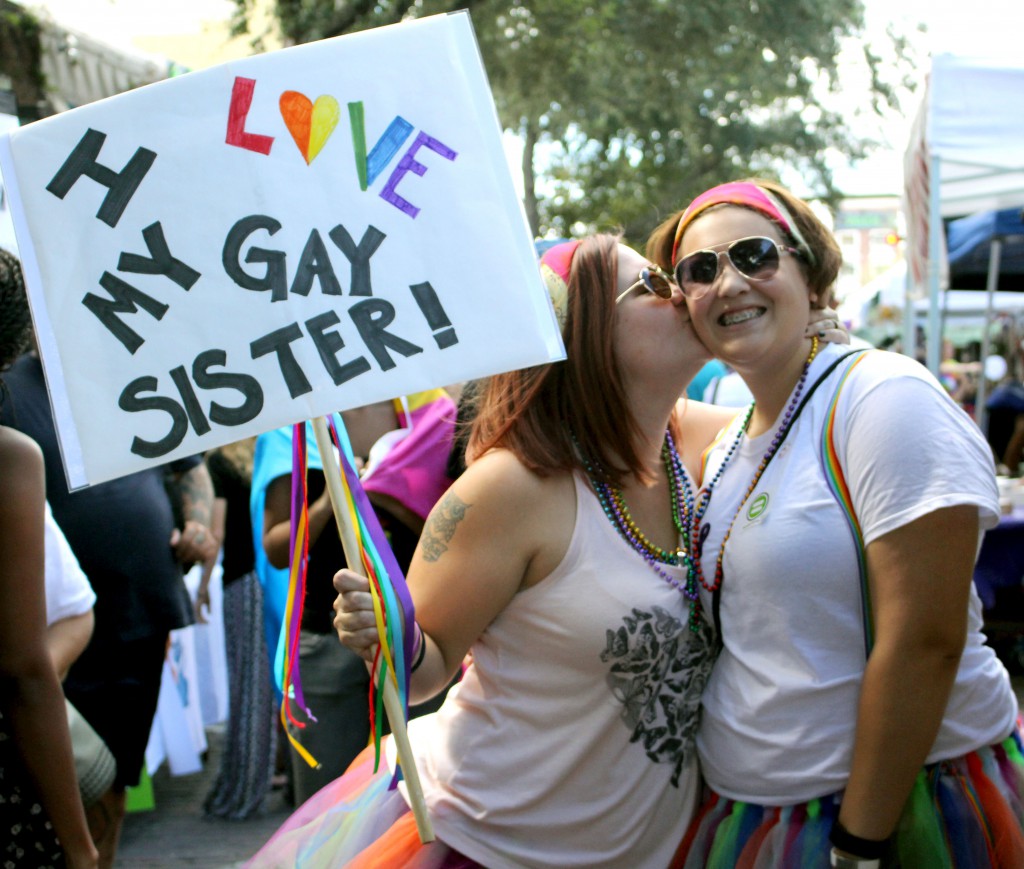 Bruce Blackwell (left) and Brandon Wight (right) celebrate their 11 years of official marriage at the Gainesville Pride Festival. Blackwell, 74, and Wight, 100, have been a couple for 47 years. Oriana Bravo/WUFT News

A booth at the Gainesville Pride Festival offers written encourangements for festival goers. These written reminders, pulled from the Bible, were published in different languages. Oriana Bravo/WUFT News

(Left to right) Steven Libby, Leanne Sheth and Peter Lewis hang out at the Pride Festival and browse the booths. The group of friends said it wanted to come to the festival to support the LGBTQ+ youth in the community. Oriana Bravo/WUFT News 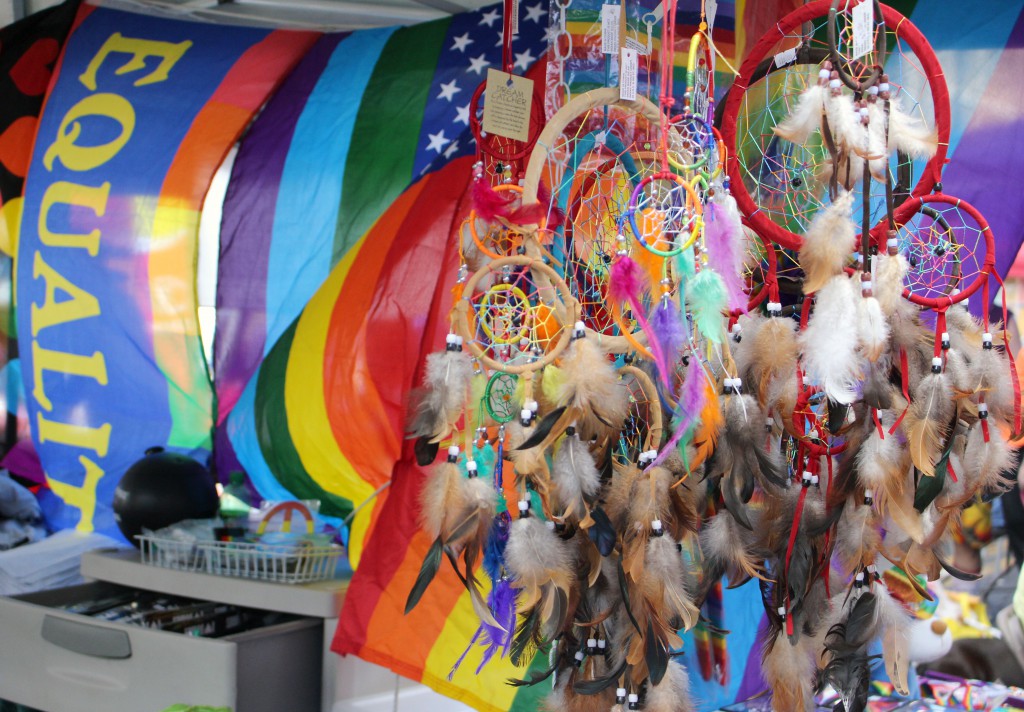 The annual Gainesville Pride Parade and Festival lined Seventh Street to the Alachua County Administration Building on Saturday, October 24. Organizations such as the LGBQ+ Youth of Gainesville attended the festival, along with presidential campaign volunteers and others with petitions in hand, asking festival goers to sign them.

Sisters Lexi McMinn and Sydney Ward attended the festival, but it was more than just another Saturday for Ward.

“My sister is coming out today!” McMinn said, smiling, holding a large sign that said, “I love my gay sister!”

A random passerby heard and gave them both large hugs, congratulating Ward on her special day.

Couple Brandon Wight and Bruce Blackwell were also congratulated by those attending the festival for their 47 years together but more recent 11 years of marriage.

Outfits of all different colors, painted bodies, faces, tutus and wigs could be found worn and sold throughout the festival.

Oriana is a WUFT reporter who can be contacted by email at oribravo1@ufl.edu or Twitter at @oridbravo
@Oridbravo
Previous Local Vendors Fear National Pumpkin Shortage
Next Gainesville’s Repurpose Project Spreads Reuse Mission

Non-Profits Pivot To Help In Pandemic