Despite battling Hodgkin lymphoma, a University of Florida student was inspired to help the local homeless of Gainesville.

After volunteering in homeless shelters and witnessing an overwhelming and overcrowded environment, Zack Smith was inspired to start his own organization.

Last spring, Smith and his roommate Brendon Martin, both 20, founded A Reason to Give, a UF student organization that provides lunch for Gainesville’s homeless community. However, right as the idea started to develop, Smith was diagnosed with stage-three Hodgkin lymphoma.

Smith said he went to the doctor for a checkup and complained of a lump beneath his armpit. The checkup led to a CAT scan, then surgery and a biopsy.

He remembers coming out of anesthesia after his surgery.

“My surgeon walks up and says the surgery went really well, everything is looking good, and um, you have Hodgkin lymphoma,” Smith said.

Though Smith withdrew from his classes for medical reasons and moved back home to Jacksonville, he refused to let his sickness delay the growth of A Reason to Give. He drove to Gainesville in between R-CHOP chemotherapy sessions to host general body meetings.

Martin said Smith doesn’t let anything in his life bring him down from serving others.

“He has a really good heart. He is very welcoming to people. He’s the kind of person where he goes into a room and it lights up,” Martin said. “And so because of that, he was able to funnel it into something like this.”

After preparing during spring semester, Smith, Martin and A Reason to Give fed the homeless for the first time at the end of September at GRACE Marketplace.

Liz Cox, who lives in a tent at GRACE Marketplace, said she is thankful for A Reason to Give because there are not many people who come to serve food anymore.

“In the beginning there were a lot of churches that came out, but they stopped because people were going to the hospital left and right with food poisoning,” Cox said. “Churches don’t want to be liable for that.”

Cox said on a daily basis they only get spoiled foods, like stale bread and expired yogurt.

It is nice to have a group come and ask about the residents’ needs, Cox said.

“A lot of groups come in, talk to the staff and then say ‘okay here you go, bye,’ and they don’t know the daily struggle of people that live here,” Cox said. “They asked us what the basic necessities around here were and what we didn’t get and what kind of food we would like.”

“We have been relying on the generosity of the community for our first year,” DeCarmine said. “We’ve done about 70,000 meals since we opened.”

He said some food comes from the food bank, which is usually close to expiration date.

“It may be that there are a couple of spoiled grapes in a perfectly good bag of grapes,” he said. “And if we put that out and we don’t catch it, it does happen from time to time, I’m not going to say that it doesn’t.”

DeCarmine assured that GRACE Marketplace does its best with the food it does have.

“We make sure that hungry people get a meal,” DeCarmine said. “We do our best to make sure that the food put out there is of the same quality that we would eat.”

DeCarmine said GRACE Marketplace will be dedicating its new kitchen on Nov. 14.

Cox said knowing Smith had cancer, she would think this was the last thing on his mind.

“I’m 30 now. When I was 21, this was the last thing I would have probably thought about doing, coming to feed people or do the stuff like that,” Cox said. “I think the fact of just the age alone and the interest in their hearts — you can feel it when you talk to them — they really feel for the people, and they want to get to know the people and talk to the people.”

Another tent resident at GRACE Marketplace, James Burney, said he does not pick up on any prejudice or racism when talking to Smith.

“You can tell a real smile from a fake smile, a real hug from a fake hug, you can tell it,” Burney said. “He’s just more like a genuine guy. He’s just got a good heart on him. He’ll go far in life.”

“It’s so easy for us to look at homeless people or people less fortunate than us and turn the other cheek and say ‘well they did this to themselves,’ but that’s not always the case,” she said. “I think that it’s amazing that Zack and Brendon are taking the time to give these people a second chance.”

Allie Smith said she helped make sandwiches last week and it was great to see Smith and Martin’s work pay off.

“It shows a lot about their teamwork and their friendship that Brendon took on such a large commitment when Zack was gone, and also that they were able to work together to keep this going because it was such a new organization,” she said.

Nikki Van der Velde, Smith’s girlfriend of four years and member of A Reason to Give, said she always thought if she or another 20-year-old was diagnosed with cancer it would be such a terrible thing to deal with.

“But what I saw in Zack, was that it made him more motivated to go out and actually make a difference with this club,” she said. “He accomplished so much more in that six months going through chemotherapy than I felt like I had my whole life.”

Smith raised around $3,500 for A Reason to Give from family, friends and workers at the hospital where he received treatment, she said.

“Instead of sitting at home and feeling sorry for himself and letting people come and tend to him, he was like ‘I’m not going to let this define me.’” Van der Velde said.

There is always a reason to give, Smith said.

“It’s not like I don’t have anything else going on. I’m a busy guy,” he said. “But there’s always a reason to stop what you’re doing and give back to your community.”

Smith said there are a lot of things that people want to do in life, but many times they don’t take that extra step to make an idea a reality.

“What was happening was inspiring me,” Smith said. “If I don’t do this now, when am I going to do it?”

On May 29, PET scans showed that Smith was cancer-free.

“You have cancer and you realize there are more important things,” he said. “If anything I feel like I am a stronger person coming out of it.”

Michelle is a reporter who can be contacted by calling 352-392-6397 or emailing news@wuft.org.
Previous Oct. 15, 2015: Morning News in 90
Next Bat Festival Challenges Stereotypes About The Species 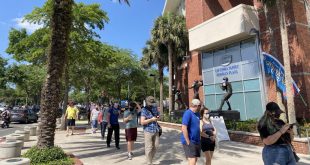 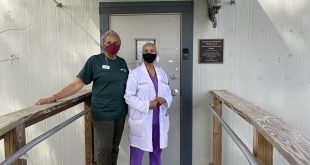 Hope is on the horizon as more students and faculty return to the University of Florida campus starting this summer and fall.