Gainesville Food Tour Offers a Side of History

The way Ryan Earls and Caroline Chance Earls see it, the best way to help people learn local history is to serve it up with a side of local food.

The couple has traveled around the world taking in the history and atmosphere of countries while trying out their cuisines. They recently started Gainesville Food Tour, a guided tour of downtown Gainesville and its restaurants.

“Any time we’ve gone to a new place, we try to do a food tour,” Caroline, 29, said. “We’ve done two different ones in New York, and then one in Las Vegas and one in Italy, and we figured it was a really great way to learn about a city while you’re eating and going to local establishments.”

The pair decided that it was time to bring their appetites for local food and history to Gainesville.

On Sept. 27, they’ll give their second food tour, in 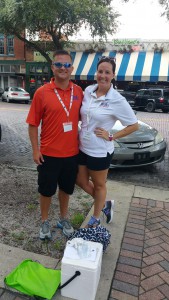 which they will lead groups of 12 people to places where they can sample history and food.

They plan to offer more tours in October.

“After going on some food tours abroad, we really thought it was the best way to get to know a city,” Ryan, 33, said. “We thought, ‘Why don’t we have this in Gainesville?’”

The Earls have teamed up with seven restaurants for the tour. They are: Emiliano’s Café, The Hyppo, Vellos Brickstreet Grill, Loosey’s, Mojo Bar-B-Que, Liquid Ginger and The Sweetwater Branch Inn.

For each tour, participants visit five of the restaurants – which recently served up dishes such as apricot barbecue, burnt ends and pepper jack mac and cheese at Mojo; a vegetable frittata, orange marmalade and cream cheese crepes at Sweetwater Inn; burger sliders and truffle fries at Loosey’s; tapas at Emiliano’s; popsicles at Hyppo; shrimp and grits at Vellos and pad thai at Liquid Ginger.

Inside the restaurants, participants get to hear from the chefs, owners or managers to learn about the food, how it’s prepared and the history of the restaurant.

Managing partner at Emiliano’s, Diego Ibañez, said the Earls bring a great energy to the tour.

“They’re super nice people,” Ibañez said. “They make it so exciting for customers, and that makes them excited to come try our food.”

Another thing that inspired the Earls to create the food tours was their own need to escape what Caroline calls “food ruts.”

Caroline said she thinks when most people eat out in Gainesville, they only think of the chain restaurants on Archer Road. She and her husband often have a hard time choosing a restaurant to eat at – especially because her inability to cook and his aversion to veggies makes that a bit of a challenge.

“I burn everything,” Caroline said. “Let’s just say I’m really good at takeout. But Ryan doesn’t eat veggies. He calls himself a ‘meat-atarian,’ so finding places we both really like is an interesting challenge.”

Nonetheless, food and fun is what keeps the couple bonded.

The couple has been married for two years now, but they still affectionately refer to themselves as newlyweds. Chance Earls was born and raised in Gainesville, while Earls has lived in Gainesville for most of his life. They met while in graduate school at the University of Florida, Chance Earls said.

“It’s funny,” she said. “We met at a mutual friend’s Thanksgiving party, but that’s not when things started up. We actually didn’t spend time together until later, during the Sugar Bowl.”

It’s hard to imagine the two apart. They take turns answering questions, fill in each others’ thoughts and answer everything as if they were one person.

The tour, however, is a new challenge for them, considering that they have full-time jobs in industries that have nothing to do with food or history.

Earls works for a software system, while Chance Earls runs a nonprofit for UF Health called PALS (Partners in Adolescent Lifestyle Support). She also works in a private practice as a marriage and family therapist.

“Our day jobs pay the bills, but this is our passion,” Earls said.

Local history is their passion as well: Chance Earls said the more research she did, the more she became interested in Gainesville’s past. She read books about Gainesville history, researched online and visited the Matheson History Museum.

She said she found herself consistently surprised by the facts she learned as she did research for conducting the tour.

“We also throw in a little bit of personal experience,” Chance Earls said. “Like Ryan’s parents said ‘I love you’ for the first time at a bar that we pass downtown. So it’s a little bit of our own lives, but most of it we just research.”

For now, Chance Earls said the tour will focus on downtown.

“That was the first development of Gainesville,” she said. “We do talk about a little bit outside of that, like Paynes Prairie or Hoggetown.”

“I’ve lived here my whole life. It’s not like you take a Gainesville history course growing up here. Some of my favorite parts were learning about where I came from.”

Paige is a reporter for WUFT News who may be contacted by calling 352-392-6397 or emailing news @wuft.org
Previous GRU at Odds with Contractor, Cites $900,000 Overpayment
Next City Approves Audit Showing GRU Overcharges