In the fall of 1983, Kevin Wilkinson, then a University of Florida freshman, went to his first Gator football game. Decades later, Wilkinson, now a Bull Gator, sat in the Swamp Saturday for the Gator’s first game of the season against New Mexico State with 90 thousand other committed sports fans.

Gator games are a family tradition for the Wilkinsons. Every home football game they make the four-hour drive from Jupiter to Gainesville.

“We’re a UF family,” Wilkinson said. “We’re passionate about it and now our daughter Jamie is there, and we’re hoping our son is a Gator next year.”

A city that lives up to its long-standing sports tradition, Gainesville ranks fourth among 83 of the best mid-sized sports cities in the nation, according to WalletHub’s “2015’s Best and Worst Cities for Sports Fans.” The city also ranks 30th among 341 cities of all sizes assessed in the report. 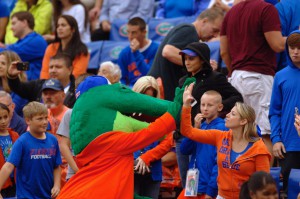 WalletHub, an online personal finance resource, conducted an in-depth analysis comparing 341 cities varying in size and other aspects such as the performance level of the city’s team(s), ticket prices, number of sports bars in the area and attendance rate.

Jill Gonzalez, spokesperson for WalletHub, said they looked at the five most followed sports in the country—football, basketball, baseball, hockey and soccer. According to the Global Sports Media Consumption Report, football is the most widely followed sport in America, so it weighed 49 percent in WalletHub’s analysis.

“Right off the bat, if you do have a great football city then that is going to really speak volumes here in these metrics,” Gonzalez said.

What makes Gainesville stand out against places like Baton Rouge and Columbia when analyzing 341 cities? The price of season tickets, according to Gonzalez.

“When we were looking at a minimum ticket price for NCAA D1 football in 2014, in Gainesville we saw $150, that ranked 54th overall, so not too bad especially when you consider studying 341 cities,” she said.

In comparison, when looking at cities such as Baton Rouge and Columbia, the season ticket expenditure for football is much higher, $415 and $360 minimum in Columbia and Baton Rouge, respectively, Gonzalez said.

“A lot of tickets are sold [in Gainesville], but they are still affordable,” Gonzalez said. “You’re not really going to be breaking the bank to see some good games.”

Gainesville also ranks better than both cities when it comes to stadium accessibility, defined as the city’s population divided by the stadium’s capacity. Gainesville ranked 48th, followed by Columbia at 55th, and Baton Rouge at 66th, Gonzalez said.

WalletHub found that many NCAA D1 teams did better for their city’s ranking than some of their pro team counterparts, especially when it came to fan friendliness and social media engagement.

“Gainesville was actually in the top 10 [for fan engagement] and beat out a lot of other pro teams, if you can believe it,” Gonzalez said.

Bruce Floyd, social media manager for the Florida Gators, said the Gators’ media properties are among the largest in all of college sports.

“That’s based on an interest and passion decades in the making,” Floyd said. “We use tools that scour the social web for keywords that relate to us and, when appropriate, we respond. We merely facilitate conversations, create awareness about important initiatives, and basically keep our fans informed and energized—and eager to visit The Swamp and our other great venues.”