By Madison Schultz and Maria Valencia

Mark Teeple is worried about returning to his trailer in Cross City after the flooding from this weekend’s storms, which brought three feet of water into his home.

His trailer’s electrical box is sitting in the baseboard and is completely covered in water. He knows that just a spark of static electricity could cause problems.

Maj. Scott Harden of the Dixie County Sheriff’s Office said about 200 homes and 50 streets and roads have flooded from rain over the weekend.

“Over 48 hours throughout the weekend, we had a little over 15 inches of rain,” Harden said. “The ground was already saturated from the rain through the days leading up to that and it just didn’t have anywhere to go.”

He said Emergency Management Services has assisted residents who live along the Steinhatchee River basin out of their homes.

So far, Teeple has been the only flood refugee at the American Red Cross temporary shelter in Cross City at the Trail Rider’s Club.

He said he arrived at Cross City from Clearwater in January and doesn’t know anyone in town, but his neighbor told about the shelter.

Sandra Klecka, sheltering lead for the American Red Cross of North Central Florida, said residents have called and said they planned on coming to the shelter to escape their flooded homes, but Teeple is the only one who showed up.

“In rural counties, they just find someone they know with a room to put them up in,” she said.

Teeple said the Red Cross was going to check on his trailer later today and let him know when it might be safe for him to return.

Sonja Reed, owner of Reedville Rentals off Southeast Highway 19, is also waiting as the Dixie County Fire Department assesses damages to her properties.

Reed said 14 of her homes are flooded, including her two-story log cabin built in 1912. She said when the water came down the turnoff it looked like a rapid.

She believes the flooding is due to the higher elevation of the highway and the Dixie County Emergency Operation Center, which were constructed years after her properties.

“My issue with this is…we would not have been turned into a water retention pond had the state not designed their road and their turnoff to run their water over on us,” she said.

WRUF Meteorologist Jeff Huffman said the flooding was caused by a persistent area of low pressure sitting just offshore in the Gulf of Mexico.

“Thankfully, satellite and radar data has confirmed that it is finally moving to the northeast and should pull away from the state by Tuesday,” Huffman said.

Harden said residents have been handling the situation well, with friends and family helping one another out. Over 5,000 sandbags have been picked up from the county yard.

“I just hope that for everybody who’s been affected that they come out of it with very little damage,” Reed said.

Madison is a reporter who can be contacted by calling 352-392-6397 or emailing news@wuft.org.
Previous ‘The Hunt’ Suspect Megan Everett Captured In Florida
Next Wild Waters Phase-Out Plan Upsets Visitors 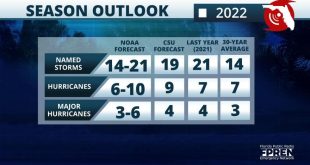