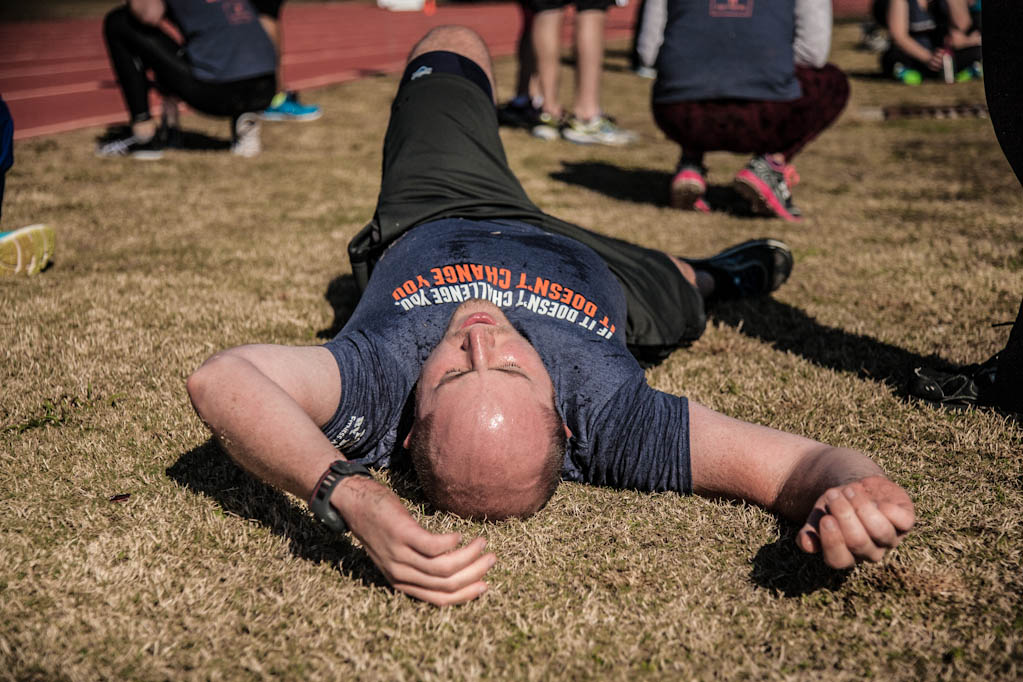 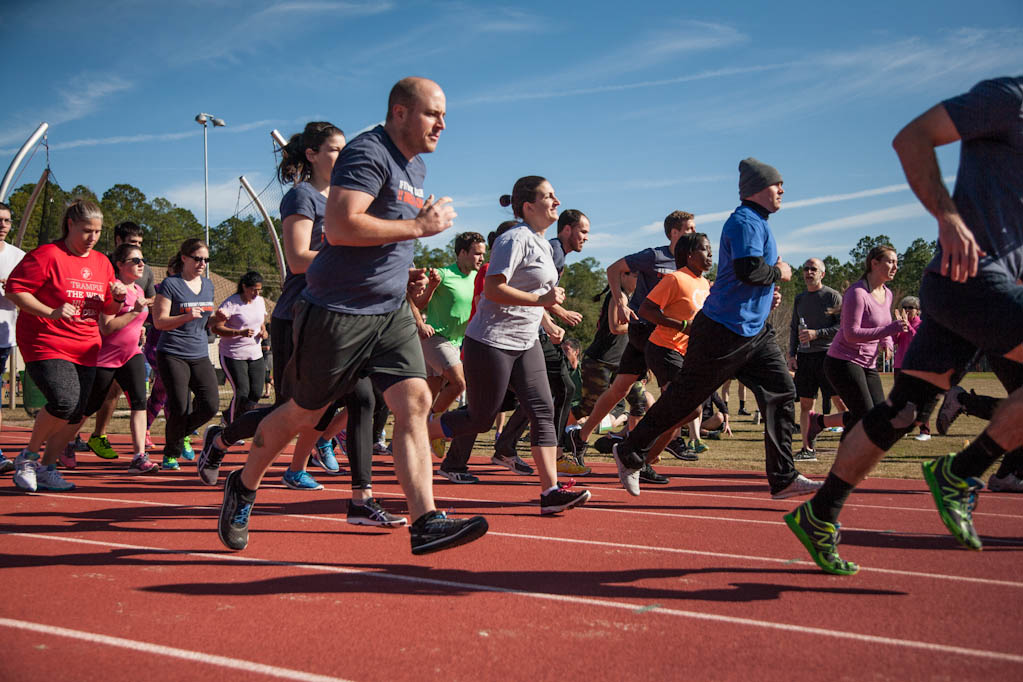 More than 100 people signed up for The Whole Life Challenge. Andrew Tatum ran with other members who signed up for the event in order to stay active for a 56-day period. Nicole Aedo / WUFT News

Tatum waits for his friend to take his measurements on the first day of the Whole Life Challenge event. Each person enrolled in the challenge gets their waist and hip measurements taken to keep track of their progress throughout the challenge. Nicole Aedo / WUFT News

Tatum works out at Body By Boris, where he is also training to receive his health fitness license. Nicole Aedo / WUFT News

Tatum holds a photo that shows him during his struggle with obesity. At his heaviest he weighed 330 pounds. Nicole Aedo / WUFT News

Tatum bicycles on the Hawthorne Trail with a group of 30 people from Gator Cycle and Body By Boris. Nicole Aedo / WUFT News 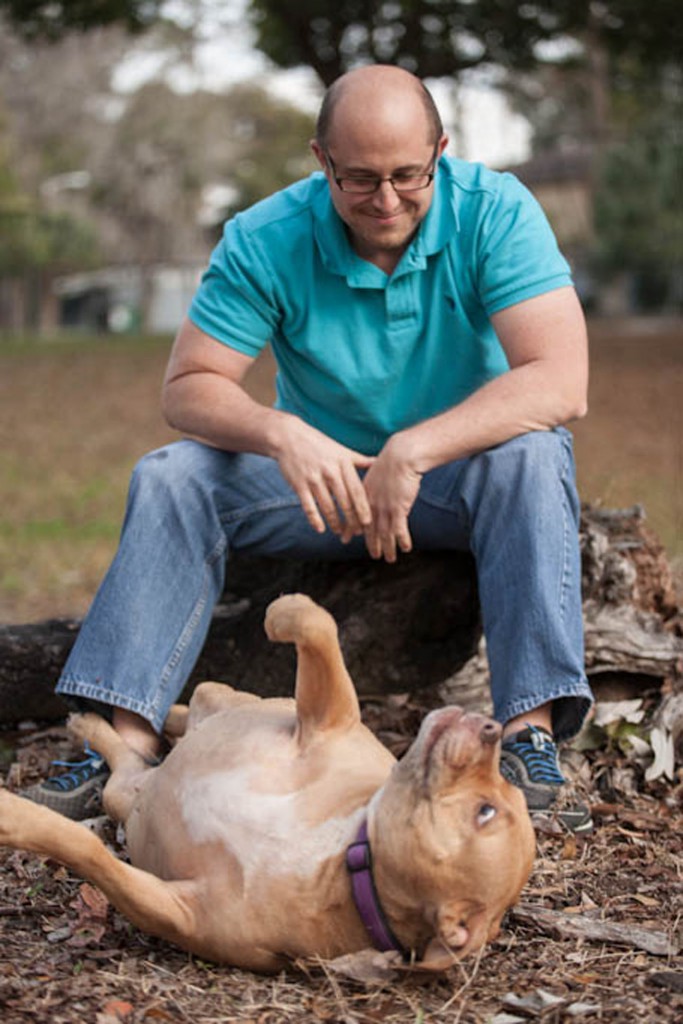 Tatum plays with his American bulldog, Bailey, at Kiwanis Park and Playground. Tatum said he tries to do activities throughout the week that help him stay active, even if it is simply walking his dog. Nicole Aedo / WUFT News

Every morning for a year Andrew Tatum woke up, went to his living room and crushed oxycodone pills on a glass table. What he put up his nose helped steady him after a long night out.

Now his morning routine is a bit different. He wakes up and heads straight to the gym to shed the 180 pounds he gained after getting clean.

If there is no time for the gym, he works on his flexibility and mobility at home. On recovery days, when he needs to let his muscles rest, he reads 20 pages out of motivational self-help books to see how other people manage their demons and turned their lives around.

Tatum encountered drugs for the first time at a party during his first semester at the University of Florida in 2005. Daniel W., who Tatum has known since childhood, was there with another friend: cocaine.

Tatum said it seemed like everyone was enjoying it so he decided to give it a try. Immediately, he was hooked.

But it wasn’t just the drug that gave Tatum a kick. He got the biggest thrill from hiding his habit. He went to work high to see if his co-workers could, by any chance, tell that he was on cocaine.

He thrived on the risk. Did his co-workers see his brown eyes were dilated? Did they notice he was speaking faster than normal?

Keeping his high under the radar was part of the addiction.

At some point, he switched from cocaine to meth. Tatum tweaked for hours at friends’ houses while developing applications for the computer company he worked for.

Not only did his substance abuse go undetected at work, but he was a model worker. He was successful and helped develop business relationships to bring in more revenue and lower costs. His addiction thrived.

But that was in 2005, before the economic crash.

Tatum, along with millions of other Americans, lost his job in 2008 due to the poor economy. But because of his past success and connections, he lined up a job in Atlanta with the merchandise leasing company Aaron’s.

John Trainor, the CIO, said he had worked with Tatum before and knew he would be good for the job.

So Trainor didn’t even require Tatum interview for the job; all Tatum needed to do was pass the drug test.

Trainor had no idea that Tatum was on drugs at the time, so it came as a surprise.

That rude awakening was just the beginning of his downward spiral. Tatum was soon evicted from his apartment, so he moved to Gainesville to be with family.

This turn of events helped Tatum realize he was not as functional as he thought. He began to re-evaluate his life.

He realized his problems went back further than the party where he first tried cocaine.

His father passed away in 2004. Doctors gave Tatum anti-depressants and anti-anxiety pills to deal with the pain. These were his real gateway drugs.

The loss of his father set the stage for his addiction, but the memory of his father is what motivated Tatum to kick the drug habit.

Tatum recalls one specific event that has stuck with him over the years. He went on a business trip with his dad once when he was a child. His dad sold heavy machinery like bulldozers and trucks.

While his father was with a client, the client looked at Tatum and asked, “Are you going to do what your daddy does?”

His father immediately stepped in and said Tatum would do something more with his life.

“He trusted I could do better,” Tatum said. “I feel like I owe it to him and to myself.”

But after a long battle fighting his drug addiction, Tatum turned to something else: food.

Tatum logged his weight, for the first time since being off drugs, in June 2013. He weighed 330 pounds.

He had replaced his love for drugs with fatty, sugary foods.

Instead of snorting a line of oxycodone every morning, Tatum drove to the McDonald’s closest to his house and get his new favorite rush, a McGriddle sandwich.

Unlike oxycodone, McGriddles were cheap and easily available. So were large packs of Reese’s Peanut Butter Cups, which rounded out his high.

His weight kept increasing, and health problems arose. Tatum had no energy, he snored all night, and it became hard for him to do simple tasks like getting into the car, doing laundry or even walking around the grocery store.

Tatum tried to find an activity he enjoyed, so he turned to biking.

Biking helped Tatum stay off drugs and at the same time lead a healthier, lighter lifestyle. He logged 15-to-20 miles each bike ride. He said it saved his life.

The exercise gave him the adrenaline rush he used to get from drugs.

Body By Boris owner Christopher “Boris” Marhefka said Tatum was very determined and knew what he wanted from the first time he walked into the gym.

Marhefka believes weight loss and health come down to a person’s mental state.

“It blew my mind,” Marhefka said when asked if he knew about Tatum’s past with drugs. But Marhefka said it painted a clear picture in his mind of where Tatum was in his life and how far he had come.

Marhefka had no idea the same person that was coming to his gym almost every day had not only a food addiction but a history with drugs.

What Tatum finds interesting about his accomplishments is that he did not go on a crazy strict diet like most people think they need to. Tatum believes people should enjoy the food in their lives.

Today, Tatum weighs 180 pounds. He lost the weight and kept it off.

Tatum is also certified in Precision Nutrition Level One, an online nutrition coaching company. This certification was just one of the steps Tatum took to help other people with substance abuse issues and food addictions like his own.

His blog Get Leveled Up provides tips for people with similar struggles and advice on how to live a healthier life.

He will sponsor his own event on September 19, Biking Thru Addiction. It starts at Boulware Springs Park and follows the Hawthorne Trail for a 32-mile ride.

Tatum hopes this event will raise awareness of addiction and show that recovery is possible. He knows not everyone will be able to complete the full 32 miles. There will be mile markers throughout so people can stop whenever they chose.

The proceeds for the event will be donated to Metamorphosis, a program for substance abusers in Gainesville. This program, unlike rehab, focuses on community.

They are areas in the facility for people to run on a track, play volleyball and bicycle.

Tatum said if he were aware of this program when he was dealing with his addictions he would have enrolled. He said the program helps people find other things to replace their addiction with.

When people ask Tatum for help, he always tells them to ask themselves, “Why?”

Why do they want to live a better life? Why does losing weight matter? Why should you change?

“Everyone is about to enter into some type of storm,” Tatum said. “Either they are in a storm or about to get out of one. It’s a cycle. So you must retrain your mind.”

Tatum asked himself those same questions when he first decided to lose weight and it helped him visualize his success.

The reason why Tatum needed to lose the weight was so he did not have to worry about breaking a chair if it was not sturdy enough.

He wanted to ride roller coasters at Busch Gardens without waiting for a bigger seat.

Nicole is a reporter who can be contacted by calling 352-392-6397 or emailing news@wuft.org.
Previous City To Renovate Park’s Restrooms
Next Devotees Turn To Krishna Lifestyle For Solace