10 CAN Eases War Veteran Back Into Civilian Life

Jeremy Johnson wanted to get out of his hometown of St. Petersburg and do something with his life. He was 17 years old when he signed up for the armed forces.

Johnson went on four tours between 2000 and 2003. He was among the first to go to Iraq after the 9/11 attacks. During the briefing for that tour, he said he was told 50 percent of his team wouldn’t make it back.

Johnson fought every day to stay alive, make it back to the base, call home and tell his family he loved them one more time.

“It was hard,” his wife Kelly said. “But I knew that’s what you sign up for when you marry a military man.”

The patrols, explosions and attacks were endless. Friends died in front of him.

“You’re over there doing mission,” Johnson said. “You don’t have the luxury of deciding whether something is good or bad. You’ve got a job to do.”

Johnson beat the odds one more time in 2003. He made it back to the states.

But war came home with him.

Three tours in the Middle East left him with spinal cord injuries, post-traumatic stress disorder and no idea how to go back to living a civilian life.

He couldn’t shake the habits he learned halfway across the world. He analyzed every movement for potential threats. He slept with a gun under his pillow. Some nights he even patrolled the house.

The aggressiveness that kept him alive overseas had now built up walls around him. He knew his family wasn’t a threat, but six-to-eight months of combat mode wasn’t something he could just turn off.

“That scared the piss out of [my family],” Johnson said.

Alcohol addiction swallowed two years of his life. When he drank, he would sometimes disappear for days. There were times even he didn’t know where he went.

He hit rock bottom. He was losing his family to endless arguments. His kids began to forget who he was because he was never around. He got tangled up with the law; jail was only a step away.

He was a long way from his decorated military career.

“When you hit that point and you realize the only people standing around with you are the ones who love you and care about you, then it’s like, man, maybe I need to change,” Johnson said.

But Johnson hit a rut trying to figure out the next step in his life. He could rarely bring himself to leave the house.

He eventually picked himself up and started going to a Veterans Affairs hospital. He found a therapist that used words instead of medication, talking him through the process.

Therapy at the VA helped, but it could only go so far.

A Mile In Your Shoes

The Johnson family didn’t move on to the next chapter of their lives until his sons’ hair grabbed a stranger’s attention.

His two sons sported mohawks while attending Caregiver Resource Day at the VA, catching the attention of Matthew Burke, CEO and founder of 10 CAN. Burke felt he needed to approach the family. The Johnson’s left that day with a business card for 10 CAN, a Christian Adventure Network that works to help veterans and first responders.

Johnson didn’t want to accept any more help. But after much thought and prayer, he and Kelly decided to give 10 CAN a try.

The Johnsons were uncertain about Burke at first, as they were with anyone new they let into their lives. But the first time they stepped onto his farm, they found out Burke also served three tours in the Middle East. And he was working through his own injuries and PTSD.

Johnson didn’t need to explain every little thing to Burke, the triggers or the body language that could be read as threatening.

“You realize someone has walked a mile in your shoes,” Johnson said.

Burke remembers Johnson was rough around the edges when he first started — lost in transition. And Burke didn’t claim to have all the answers.

“Everyone’s war is different,” he said. “Sometimes Jeremy just wants to talk. He don’t need me to respond or try to fix something.”

As the two men walked through this new life together, Burke helped pull Johnson out of the nightmare in his head.

Johnson said others were quick to give advice.

Burke was quick to be a friend.

10 CAN didn’t feel like therapy. The farm Burke owns is 10 acres of grass and blooms, trees dotted across the fields thick with the promise of future fruit.

The list of tasks was unfamiliar at first. But step by step, the Johnsons learned to plant potatoes, grow mushrooms and take care of flowers.

Johnson learned how to stop coming off so aggressively. The goats helped.

Johnson compared the goats to people.  If they don’t like a person’s aura or atmosphere, they’ll keep away, just like others used to keep away from Johnson because he carried himself in a threatening way.

As he learned to lead goats to greener pastures, his personal connections began coming back.

That meant going back to church again and letting God back in his life.

His faith gave him confidence that life was in God’s hands, not his. It helped him worry less about his problems, like his three-year fight to get 100 percent permanent and total disability coverage from the VA.  He believes there are reasons it took that long. The government didn’t provide that kind of spiritual guidance.

“If you don’t believe in something,” Johnson said. “You’ll fall for anything.”

He started to pray with his children, which made him feel like a good father.

Johnson connected with his community too, finding a new purpose in working with 10 CAN’s volunteer efforts. Together with 10 CAN, Johnson harvested a crop of potatoes. Two hundred pounds of the harvest went to families in need.

He was growing again.

A Ways To Go

Johnson and his family spend three-to-five days at 10 CAN each week, still learning but comfortable. They feed the goats, clear out the woods and play with the chickens in the morning. In the blistering afternoon heat, they seek refuge in the dappled shade of the trees while sipping milkshakes from a nearby coffee shop.

Johnson has come a long way from the 17-year-old eager to serve his country.

He watches his sons fool around on a tree swing and his wife feed the remains of her milkshake to the dogs. He’s found a place where he can continue moving forward.

“I’m better than I was six months ago,” Johnson said. “Still got a way to go though.” 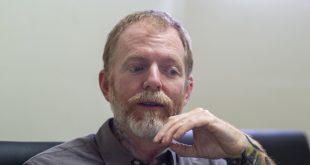 Community Spring is a grassroots group working in East Gainesville to help with the problems of poverty.