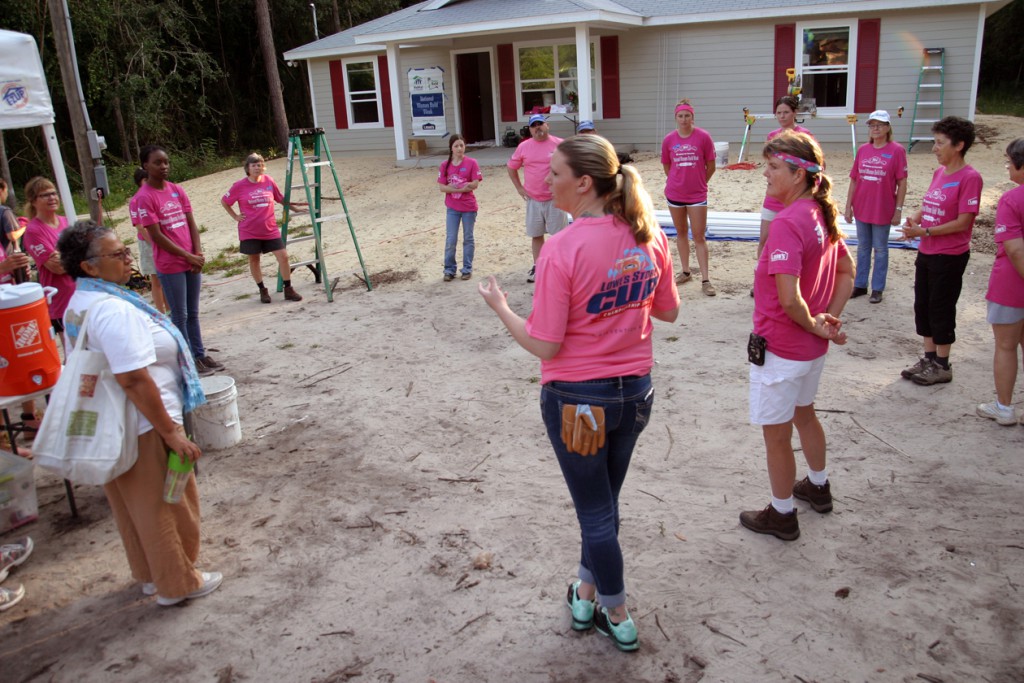 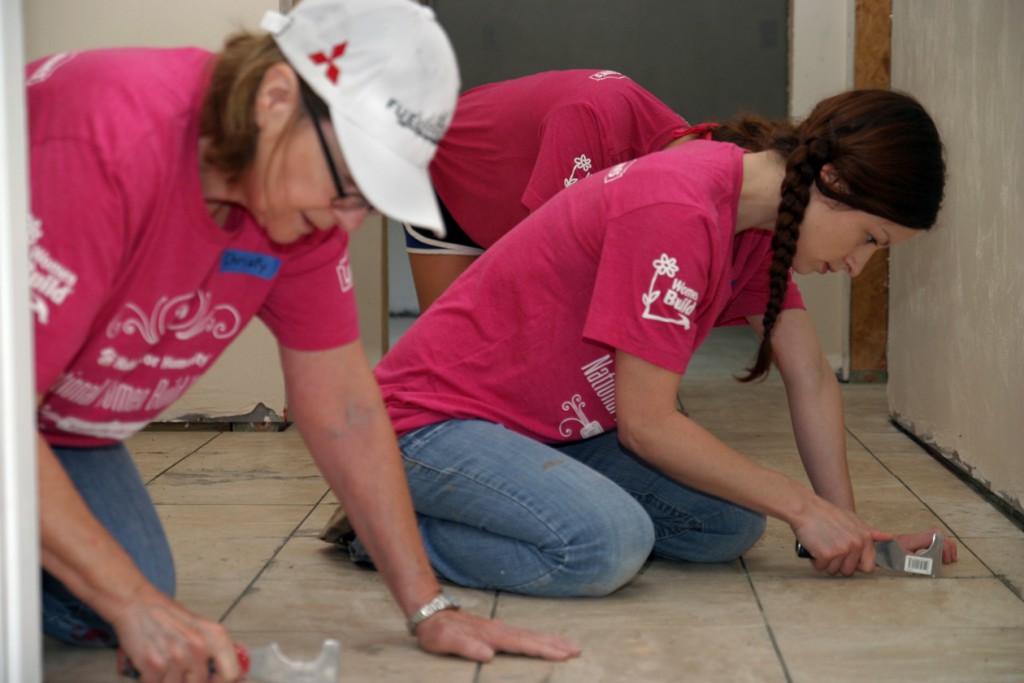 From left to right, Christy Pappas, 67, and Alyssa Brown, 27, scrape old grout and dirt from between the tiles in preparation for a fresh application.

Kaylee Petik, a 21-year-old UF student, pours water over 61-year-old Nicole Germain to secure a temporary tattoo. The tattoos were supplied by Lowes along with t-shirts, towels and banners to highlight National Women Build Week.

Gina Eaton (left), a 34-year-old graduate student at UF, and Heather Petroccia, a 26-year-old Ph.D. student at UF, clean out buckets to prepare them to mix grout for the tiles.

Susan Falsetti, a 53-year-old technical consultant, measures a length of baseboard for cutting. “I’m not a professional!” she said.

Kathy Bryant, 62, swipes paint down long wooden boards. Bryant, who is retired, started women’s build in November and plans on continuing as long as she can.

Beth Kurtzman (left) teaches Deanna Lamont, a 36-year-old OPS at Paynes Prairie, how to apply grout to the window. Kurtzman is the women build supervisor and assigned the volunteers their tasks for the day.

Temporary tattoos added color onto the arms and faces of the women volunteering. This is the 8th house that Alachua Women Build has worked on. 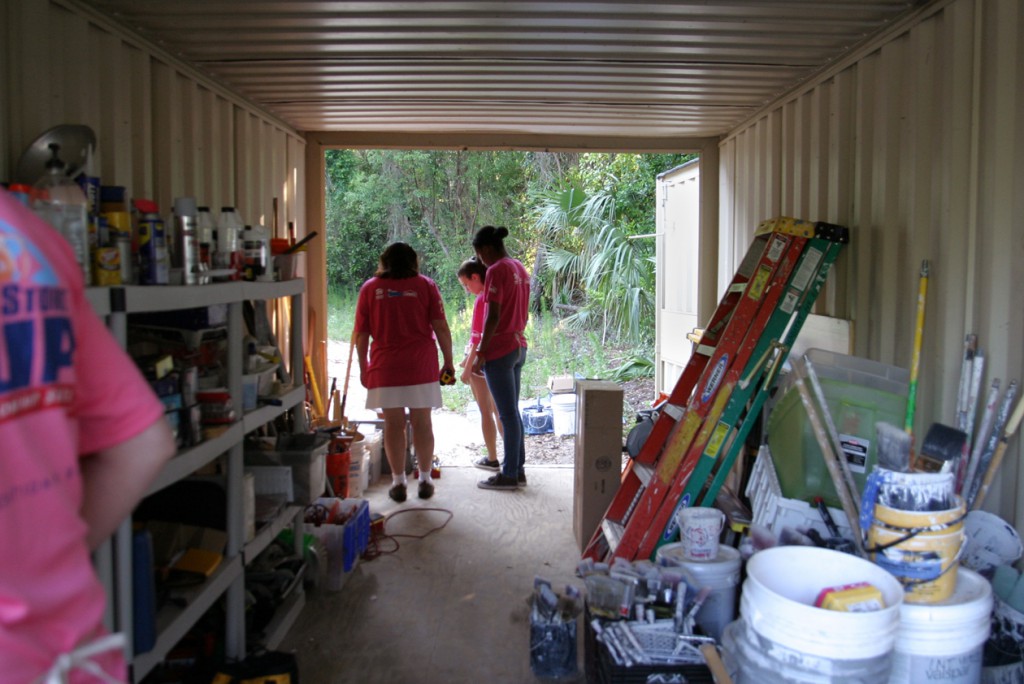 Three women gather up tools from a trailer in preparation for a long day of construction. Women’s builds usually last from 8 a.m. to 2 p.m. with lunch served by volunteers.

Nail guns and table saws make more than just houses. When women construct with Alachua Habitat for Humanity Women Build, they build up themselves and other women.

On Saturday, around 40 volunteers joined Alachua Women Build to finish its eighth house. The group also celebrated National Women Build Week which ran from May 2-10.

Alachua Women Build was one of 300 affiliates nationwide that received a grant as part of its participation in the weeklong event that challenges women to help build affordable housing in their communities.

It received $5,000 in the form of a gift card from Lowes, which sponsors the week, and will spend the money purchasing tools and materials for future builds, according to Susan Vince of the Alachua Women Build steering committee.

The organization stands out among the affiliates participating in National Women Build Week. This women build is one of the few that is able to work year-round thanks to a dedicated women’s build group.

Saturday was just one event in an ongoing effort to empower women. Scott Winzeler, executive director of Alachua Habitat for Humanity, came out briefly to support the volunteers. A typical women build involves exclusively women, but Saturday’s build was coed, Winzeler said.

“One of the points of having a women build is that when men are not present, women are more willing to try and do things they might not do when men are around because they might feel embarrassed,” Vince said.

Women builds hopes to offer women the opportunity to learn new skills while building up a sense self-confidence and self-reliance along the way, according to Vince.

Through women build, 64-year-old Jill Carter has picked up a list of skills so long she couldn’t recall them all. She’s applied these lessons in her own home improvement by caulking two of her bathrooms and fixing her dishwasher.

“I almost never think of calling anyone,” Carter said.

She has only ever been to one coed build. After completing her first house, she was so excited with women’s build she went back to participate in a coed build close to the house she had previously been working on.

“All they wanted me to do was pick up nails and sweep floors,” she said.

She never returned to the coed builds because she felt they were more judgmental than the women builds. Men felt like women couldn’t perform certain tasks, so they were more likely to restrict women on builds.

Carter said she sees women’s build having the same effect on other women. They come in and say they could never be in charge, but after two or three weeks they become efficient and confident.

Just like Carter, many women are taking their skills and putting them to use at home. Other volunteers use women’s build as a way to prepare for their careers. Some are going into construction management programs, others are aspiring park rangers as well as construction attorneys.

And it’s not just the volunteers that are being empowered.

Lisa Brooks will own the house volunteers worked on this Saturday. She is a single mother, like 80 to 90 percent of Habitat’s family partners, Winzeler estimates.

As a family partner with Habitat, Brooks will have a down payment for her house, will have to pay the mortgage and attend homeowner education classes.

Every American family dreams of owning a home, according to Brooks, and thanks to Habitat for Humanity, she’s realizing that dream.

But women’s build adds a little something extra for her.

“God couldn’t have paired me with a group no better than women’s build,” she said. “Love is so expressed here.”

Brooks said the women are not simply there to get a job done. They have been there to make sure that she’s learning, loved and supported.

“Anyone can build a house,” she said. “It takes a special person to build a home.”

Susan Thomas: Succeeding With Schizoaffective Disorder With Help From The Gainesville Opportunity Center

Barbara Petersen never felt her path in life was defined. She had to whittle the force she would become.