Noah’s Endeavor Celebrates the End of Their Softball Season 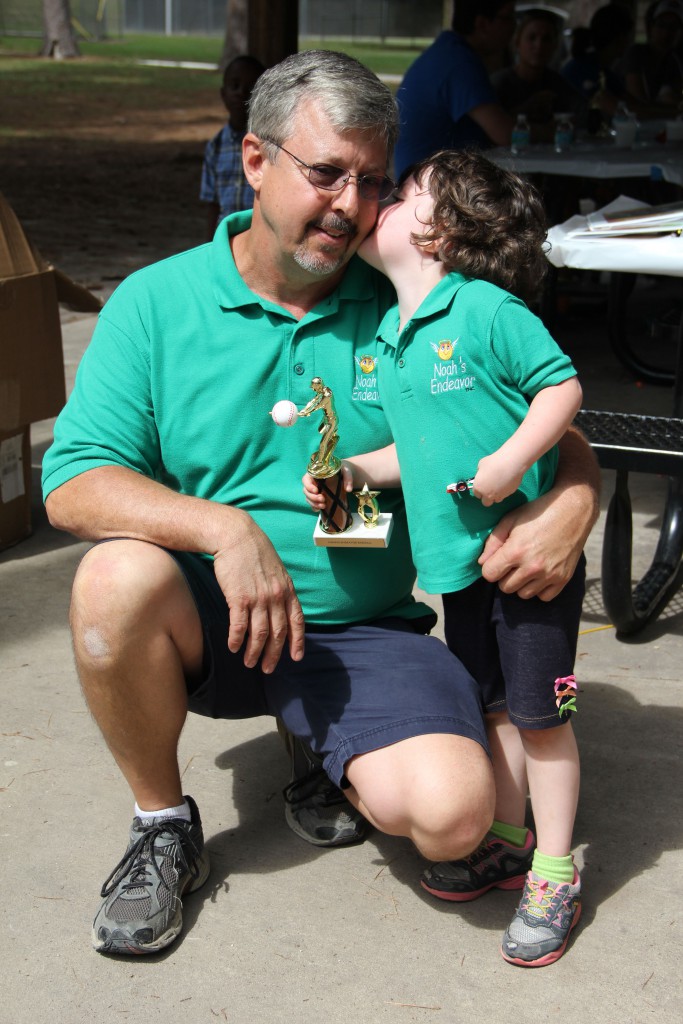 Will Voelker (left), founder of Noah's Endeavor, receives a kiss from daughter Laila Voelker as she accepts her trophy Sunday. Will is the father of Noah Voelker, whom Noah's Endeavor is named after. Will said his passion for inclusiveness, along with his love for his children, is the driving force behind everything he does. 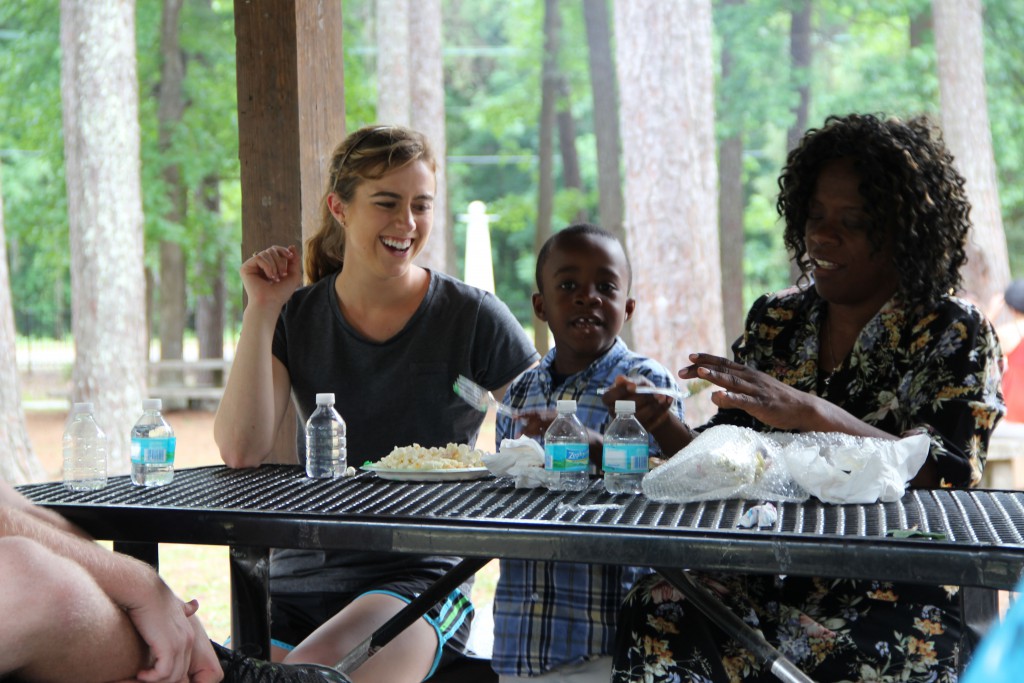 Lindsey Palm (left), a biochemistry senior at the University of Florida, shares a laugh with her friend Davide Foote, 5, and his mother, Meila Foote. Lindsey discovered Noah's Endeavor over two years ago while at the park. She began to volunteer almost every Sunday as she grew closer to the kids.

Brian Jackson, 10, showcases his trophy with a thumbs up Sunday afternoon. Brian survived a car accident that killed his mother when he was 4 years old. Five months later, his father passed away. As a result of the accident, he lost many of his motor skills including walking and talking. Now 6 years old, Brian can walk and talk. He attends Lake Forest Elementary school. Brian's favorite sports to play are basketball and football.

George Montgomery, 4, (center) plays with his new friends Jaiden Voelker (left) and David Voelker (right). One of the goals of Noah's Endeavor program is to allow kids from all backgrounds and ethnicities to play together.

Steven Voelker grills hamburgers and hot dogs Sunday at the event. Steven is the brother of Will Voelker, founder of Noah's Endeavor. "I always enjoy helping out with the special events," he said. "I like to be more behind the scenes, but I always help out whenever I can."

Will Voelker (left), awards Daniel Ratovoson, 19, with the Noah Voelker Spirit Award. Daniel was the only recipient of this award on Sunday afternoon. The award is given to participants with positive spirits, genuine hearts and cheerful smiles throughout the year.

Will Voelker holds up the Spirit Award in honor of his deceased son Noah Voelker. Each child who participated in the weekly Sunday softball games was awarded a trophy Sunday afternoon at the awards picnic. 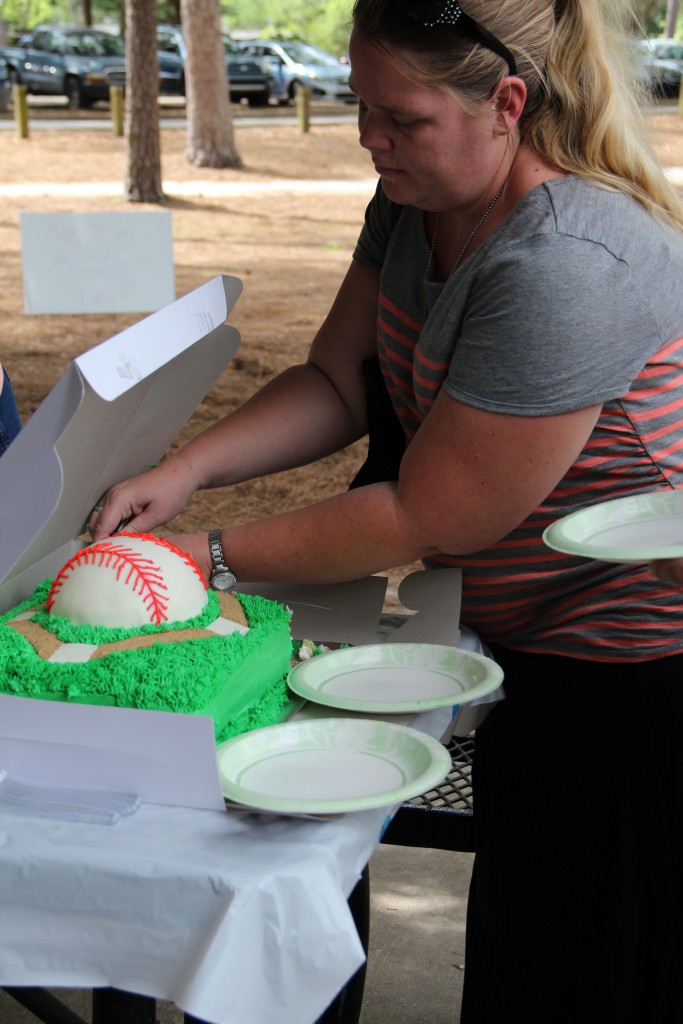 Daphne Kiernan cuts cake for those attending the awards picnic at the Albert Ray Massey (Westside) Park. Daphne discovered Noah's Endeavor on Facebook and let her disabled son join. She said she grew to love the program and became actively involved.

Every Sunday afternoon, children in Alachua County participate in outdoor activities thanks to the Noah’s Endeavor program. Softball was a common favorite this spring.

The program’s awards picnic took place Sunday at Albert Ray Massey (Westside) Park in Gainesville to celebrate the end of the season.

The Endeavor program was founded by Gainesville resident Will Voelker in 1999 as a way for boys and girls with disabilities to play and make new friends, according to the program’s website.

Over the years, the Endeavor program has grown to include a wide array of disabled and non-disabled participants along with their families and student volunteers. The program changed its name to Noah’s Endeavor in 2009 in memory of Voelker’s son Noah.

Softball isn’t the only sport available. Aquatic sports are an option, in which Will and his wife, Shelly, offer swimming lessons. Other options include basketball, bowling and soccer.

Steve Jackson, whose nephew Brian participates in the program, said he was grateful for the love and affection the kids receive..

“It’s really nice what they do,” he said. “If it wasn’t for them [Will Voelker and Noah’s Endeavor], these kids would always be overlooked.”

Upcoming events include a music day Sunday at 1 p.m., which will allow Noah’s Endeavor members to play various instruments in the University of Florida’s Music Building.

Miranda is a reporter who can be contacted by calling 352-392-6397 or emailing news@wuft.org.
Previous UF Students, Staff Attempt To Save Heritage Trees
Next UF’s BugFest Opens To The Public For The First Time