Reggae, bluegrass, rock ‘n’ roll — all genres of music harmonize under a full moon sky and in the company of hundreds of campers from North Central Florida.

Don Applebaum is the creator and mastermind of the Farm to Family Full Moon Festival, a smorgasbord of local North Central Florida music, vendors and residents.

“I’m the guy that seems to have all the pieces to the puzzle in my head,” he said.

Applebaum said the weekend festival is essentially a small village in Suwannee County, which runs April 3 to April 5. Festival-goers travelled from outer-North Central Florida and set up tents around the food vendors and stage.

“People don’t go home like you would do with any other music festival,” Applebaum said. “People become family, and it just gets bigger and bigger. Everything feels local.”

Applebaum’s friend and productions manager for Farm to Family, John Smith, said they are not looking for national acts but “good, original music from Florida.”

This year the festival is expecting up to 1,000 attendees, but Applebaum said he doesn’t want it to grow too large.

“I’m not looking for a big show that no one will enjoy,” Applebaum said. “I want it to remain what it is.”

Farm to Family, which began in 2005, occurs during a full moon every season. The moon’s glow over the stage each night enhances the eclectic atmosphere.

Listeners can also join the musicians in “picking and jamming” sessions whenever there are no acts on stage, Smith said. This allows attendees to feel more involved in the music.

Karayn Krawiec, Farm to Family’s media coordinator, said what she enjoys most about Farm to Family is its audience diversity and musical acts. She started out as an attendee herself.

“There’s young people, there’s professors, there’s a little bit of everything,” Krawiec said. “I can’t explain how much I love it – the feeling of knowing people and also meeting so many people.”

Since Krawiec’s husband passed away three years ago, Krawiec has dedicated much of her time working with Farm to Family to honor his memory. In the past, they had attended the event together.

Smith suggested the idea for a music festival after a night of “guitar picking” with Applebaum’s friends. Together they realized Applebaum already had space on his property for such an event.

After a three-year hiatus, the Farm to Family Full Moon Concert is now located along the Santa Fe River at Ellie Ray’s RV Resort & Lounge. The show had trouble finding a venue after noise complaints at past locations, including Applebaum’s backyard.

“A place like this isn’t easy to find,” Applebaum said. “It’s different from every other kind of musical festival. It’s not outside in the open space and scorching hot.”

Even though Applebaum hasn’t made a significant profit from it, the festival is his drive. He originally intended to raise money from it to pay off his mortgage, but it didn’t work out.

And Applebaum didn’t care. The music and joy it gives people is enough, he said.

“There are plenty of times while I was searching where I could’ve stopped and said, why am I doing this, this is going to be a lot of work,” Applebaum said. “It’s changed my life and changed the lives of a lot of people around me.”

Tickets for Farm to Family are sold at the gate for $55. The gates open at noon on Thursday for extended camping.

Proceeds from Farm to Family will be going toward Our Santa Fe River and Pure Water Wilderness.

Alicia is a reporter for WUFT News and can be contacted by calling 352-392-6397 or emailing news@wuft.org.
Previous April 1, 2015: Afternoon News in 90
Next Florida Bill Proposing Concealed Carry On Public School Campuses Delayed 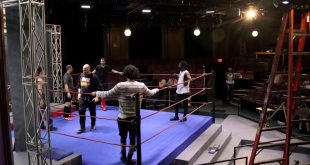