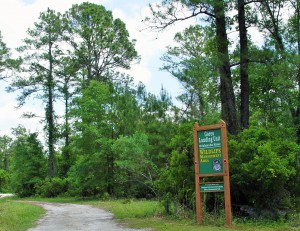 Gores Landing Wildlife Management area is a popular place for turkey hunters to visit during the turkey season in March. Photo courtesy of Greg Workman.

A large portion of McLemore Road, which is frequently traveled by turkey hunters, is closed until March 29 due to heavy rainfall and flooding conditions in the area.

The closure overlaps with the spring turkey season, which only allows about a week to legally hunt bearded turkey or gobbler, from March 21-29, according to the Florida Fish and Wildlife Conservation Commission. March is Florida’s main turkey season.

Greg Workman, a spokesman for the FWC, said the road is, “a main artery within the management area.”

Workman said it can become a hassle for hunters to lug equipment through an alternate trail covered in water to get around a main traffic road like the one in Gores Landing.

The commission chose to close the road because of unsafe driving conditions during this time of year.

“Accessibility is important,” said Wade Brenner, a biologist for the fish and wildlife commission. “(But) the closure was based on public safety.”

Although the Ocala National Forest boasts a large alternate option for turkey hunting, Workman said Gores Landing is a popular area. He cited the cypress low lands and oak hammocks which make a great habitat for turkey as reasons why.

Workman also explained the intricate calls, equipment and methods of luring involved in turkey hunting. Gun ammo, turkey calls, decoys, a portable turkey blind and a turkey seat are all needed for success.

A wrong call can be detrimental to the process; a “putt” instead of “yelp”, and the turkey could be uninterested and long gone. Both calls involve the hunter mimicking female turkey, or hen, noises, but the wrong one could cause him to lose his prey.

“It’s not about connecting and shooting; it’s just about the hunt itself,” Workman said.

Situations like a closed road can cause even more problems for hunters, and it’s not the first time this has been an issue.

Workman said the road has been closed due to flooding previously and the only long-term solution to the problem is to get funding to build a new road with a water flow system, while keeping the area as natural as possible.

Gores Landing runs along the Ocklawaha River and the commission built the road in cooperation with the Department of Environmental Protection to enable travel across the entire length of the property from north to south and vice versa, said Andrea Boliek Walker, regional public hunting areas biologist.

In the past, the agency at the wildlife management area used construction on the river bed to prevent the river from flooding but ran out of funding before they could reach the area currently closed, she said.

Boliek Walker said because the closed area fills with so much water, even with proper construction, they may not be able to prevent future closings.

“There is a very healthy turkey population in that area and the habitat in that area is very favorable for turkeys as well,” Boliek Walker said.

The detailed art of turkey hunting has attracted people from around the country to this area because of the Osceola wild turkey, a celebrity within the turkey world.

Hunting areas and local communities are greatly impacted by the demand for the Osceola turkey, and turkey season is in full swing around the state despite this area’s obstacles, Workman said.

“Funding is number one,” Workman said. “But public access to all areas within that management area is a goal and that would definitely be a positive step in the right direction in accessibility.”

Marena is a reporter who can be contacted by calling 352-392-6397 or emailing news@wuft.org.
Previous Couple Travels North Central Florida Teaching Blues In Schools
Next ‘Home-Free’ Squatters Find Community In Gainesville