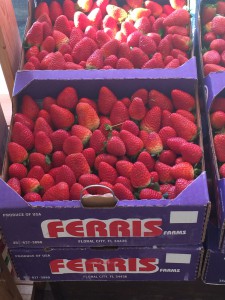 Ferris Farms, a central Florida strawberry farm, is a research station for a new advisory system that could save the state’s strawberry growers millions of dollars.

Ferris Farms is the largest strawberry producer in Citrus County, according to the farms’ general manager, Dudley Calfee.

In 2008, Natalia Peres, a University of Florida strawberry pathology expert, asked Calfee to help her test a system designed to reduce crop losses while increasing farmer profits and keeping excess chemicals out of Florida’s environment.

Known as the Strawberry Advisory System (SAS), the service notifies subscribed farmers via email or text alerts when their crops are at risk for infection and need to be sprayed with fungicide. The service is also available online.

Every 15 minutes, sensors at six solar-powered stations across central Florida detect weather conditions. These include leaf wetness, temperature and humidity.

Using this data, the stations are able to calculate the risk of infection and notify farmers with need-based recommendations that also help decrease fungicide use.

Peres said she chose Ferris Farms as a test site because it is farther north than other major central Florida strawberry operations. This means colder weather, less risk of infection for the plants and enough breeze to keep the fruit in stable condition.

Florida’s climate is too humid for strawberries to grow on a large scale without rotting, so farmers have to plant the seeds and apply fungicide to keep them fresh enough to bring to consumers.

Calfee was initially reluctant to test the system, but he gave Peres a quarter-acre test plot out of his 83 total acres for the first year, Peres said.

Calfee sprayed the remaining acres according to a calendar-based schedule, which is on a fixed timeline, regardless of actual weather conditions, he said.

The strawberries in Peres’ plot were sprayed according to SAS recommendations.

The results of Peres’ tests convinced Calfee that the system was an effective tool.

By the fifth season, the only part of Ferris Farms not using SAS was one quarter-acre plot used for quality control, Peres said.

That one quarter-acre is used to collect and compare data between fixed-schedule spraying methods and need-based methods, Peres said.

Calfee said SAS helped Ferris Farms reduce its use of fungal sprays by about half.

That’s the statewide average, according to research she and her team conducted, Peres said.

A study published by UF’s Food and Resource Economics Department found that SAS subscribers can earn about $2 million in additional income over a 10-year period. The study used a 26-acre farm as the average.

SAS is part of a growing global trend of precision agriculture that is helping farmers around the world use less water, chemicals and pesticides, according to IBM research.

Peres said that when used as directed, fungicides are not harmful to the environment.

“The problems happen if the grower doesn’t follow the label and uses more than he needs to,” she said.

Funding for Peres’ research comes mainly from the U.S. Department of Agriculture and the Florida Strawberry Growers Association.

There are about 11,000 acres of strawberry farms in Florida, and the demand for labor creates jobs for 16,500 workers, Parker said.

Peres said about half of the strawberry growers in Florida are currently subscribed to SAS. Her ultimate goal is to integrate everyone in the strawberry industry into one system.

Florida leads the nation in the production of strawberries during the winter season, Peres said.

But he said the cost to produce strawberries is still very high, requiring a large investment of money and risk at the beginning of each season.

Weather is unpredictable, Calfee said, so he cannot forecast whether he’ll be able to recoup his investment until the end of the harvest.

“You can be the best grower in the world, but if Mother Nature doesn’t cooperate, you aren’t going to be successful,” Calfee said.