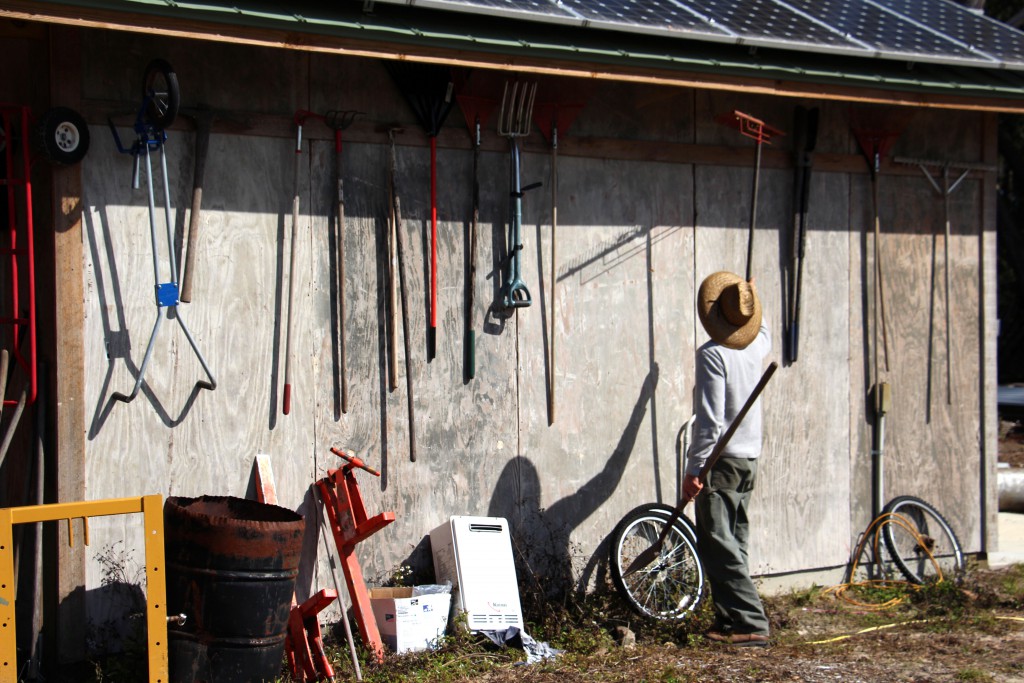 Farmer Cody Galligan, 35, hangs his tools on the side of the building at Siembra Farm. 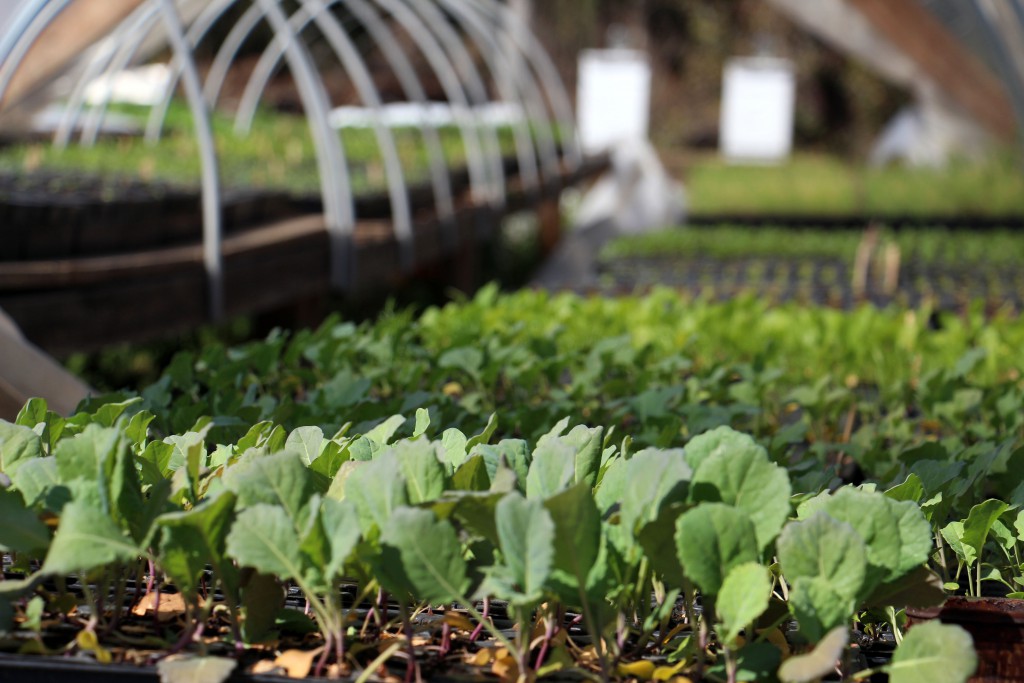 These Siembra Farm crops are protected in a hoop house, which insulates heat for plant growth.

The farm plants crops like lettuce (left) that tolerate cooler temperatures well. A hoop house stands over crops at Siembra Farm (right) to prevent the effect of colder temperatures.

Maddie, Galligan’s dog, lies on the ground at Siembra Farm.

This sign, attached to the door by a magnet, is used to direct subscribers to the CSA pickup at Siembra Farm.

Siembra Farm is about 15 minutes away from campus, located at 2033 SE 23rd Place in Gainesville, Florida.

Siembra Farm organizes its list of produce for CSA with whiteboards and dry-eraser markers.

Rows of broccoli crops are uncovered by Jennifer Ramsey, a volunteer at Siembra Farm.

In its fall season, Siembra Farm grows crops that include kale, collards and mustards. 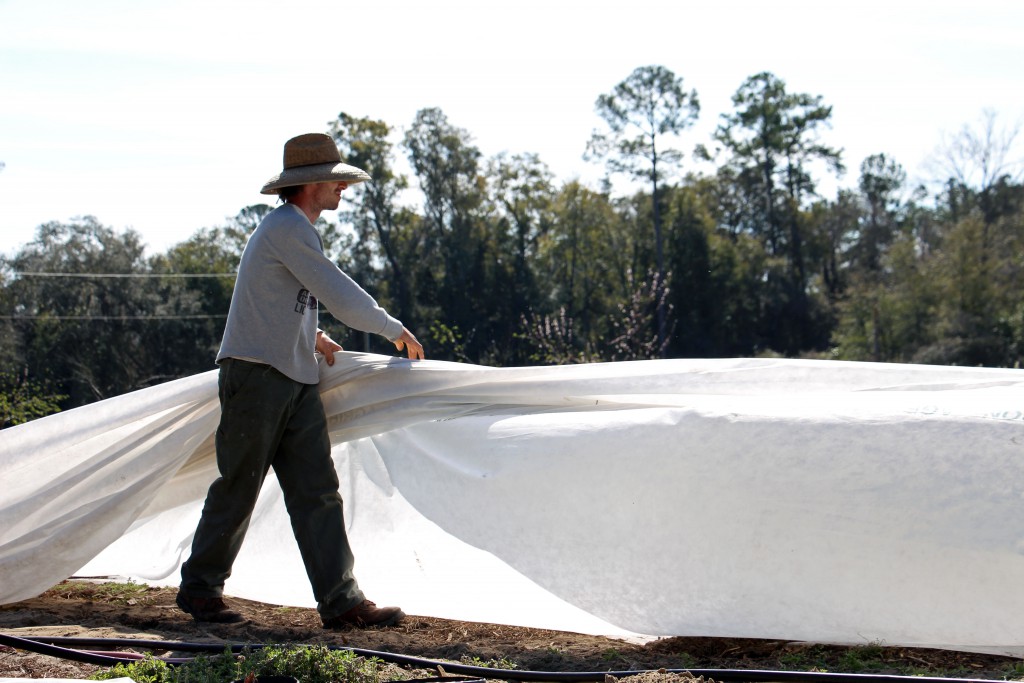 Cody Galligan walked between the low levels of dirt that separated rows of plotted seeds and plants. His hands grasped the edges of white plastic and lifted them to reveal sprouting vegetables.

The community supported agriculture (CSA) program, launched in 2010 at UF, minimizes the miles that food travels by asking local consumers to pay a given amount of money at the beginning of the season on Nov. 1 to the end of June. In turn, the consumers are able to harvest crops directly from the farm once they are grown.

“It’s something that all people of the world can do, not just the top 1 percent,” Galligan said. The 35-year-old farmer, who co-owns Siembra Farm with his wife, Veronica Robleto, said he believes that one way sustainability can be achieved is through localizing purchases.

Eating food that is grown in the immediate area and is in season are ways to be sustainable, Galligan said.

“You are eating things that are easy to grow and easy to transport to where you are,” he said. “You’re not eating apples from New Zealand or tomatoes from Peru.”

Allison Vitt, the outreach and communications coordinator at the Office of Sustainability, said she agrees that buying locally grown food is a good way to practice sustainability.

It supports local business and lessens transportation that results in carbon emissions, she said.

“Former UF president Bernie Machen really put this goal for us to be a carbon-neutral campus by 2025,” she said. “We’re really trying to work to reduce our carbon impact.”

“Your money is returning to your community instead of dropping that money to Walmart,” he said. “When you give me your money for your CSA, the more we keep the money in the community, the more it benefits everyone. If that money stays in your community, it’s probably going to make its way back to you.”

Jennifer Ramsey, a 42-year-old volunteer, manages local produce. She said she hopes the word about CSA will spread more throughout campus and the community.

About 1.1 percent of Florida residents purchase food through CSA organizations, according to a project done by the Florida Specialty Crop Foundation.

Ramsey said when he tells people he delivers CSA, they might not understand what that means.

“When the word gets out more, and people know what CSA is, then it’s kind of cool,” he said.

Ramsey helps Galligan load pickups for the Union Street Farmers Market, which is open Wednesdays from 4 to 7 p.m. in downtown Gainesville.

“Having that space helps [us] have a direct relationship with the consumer,” Galligan said. “It keeps farming sustainable and accessible for people who don’t have time to go out to a farm.”

Galligan suggests students join the CSA to become more involved with sustainability and encourages supporting the local environment and community by going to the farmers market.

“To say it’s sustainable means that we can all do it,” he said.

Deshlee is a reporter for WUFT News and can be contacted by calling 352-392-6397 or emailing news@wuft.org.
@https://twitter.com/dfordd47
Previous Oakleaf Overpass Closed During Culvert Construction
Next Jazz Band, Street Fair Draw Crowd To Downtown Gainesville For Frank Conference

Heat Policies in Florida May Overlook Most Vulnerable

Florida has made headlines this spring for record heat, but the trend stretches back far longer. Statewide temperature averages have been higher than normal for 57 out of the last 60 months.