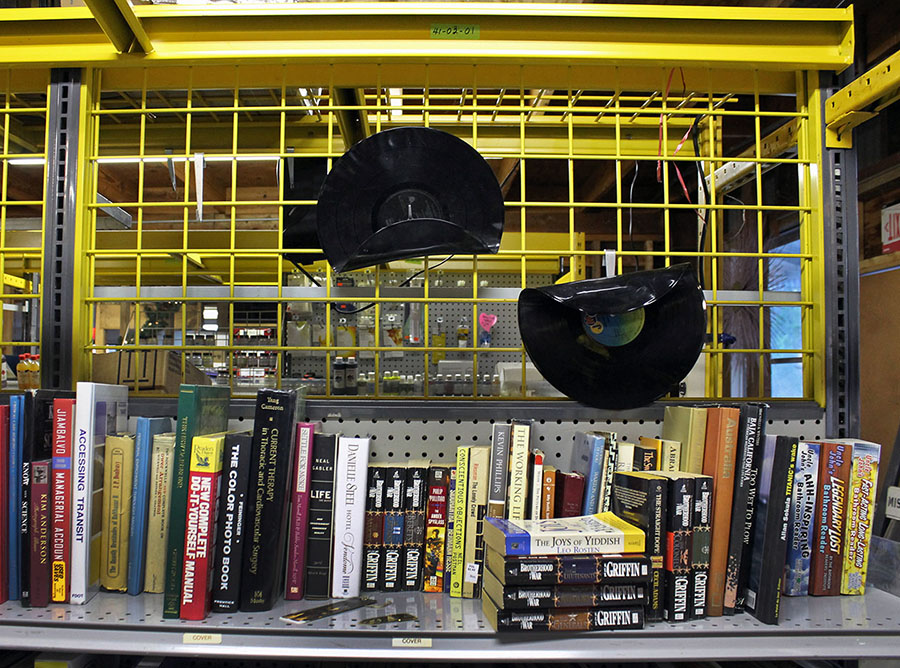 Two crafted vintage vinyls hang as decoration. They rest above the books, movies and music section of the store. 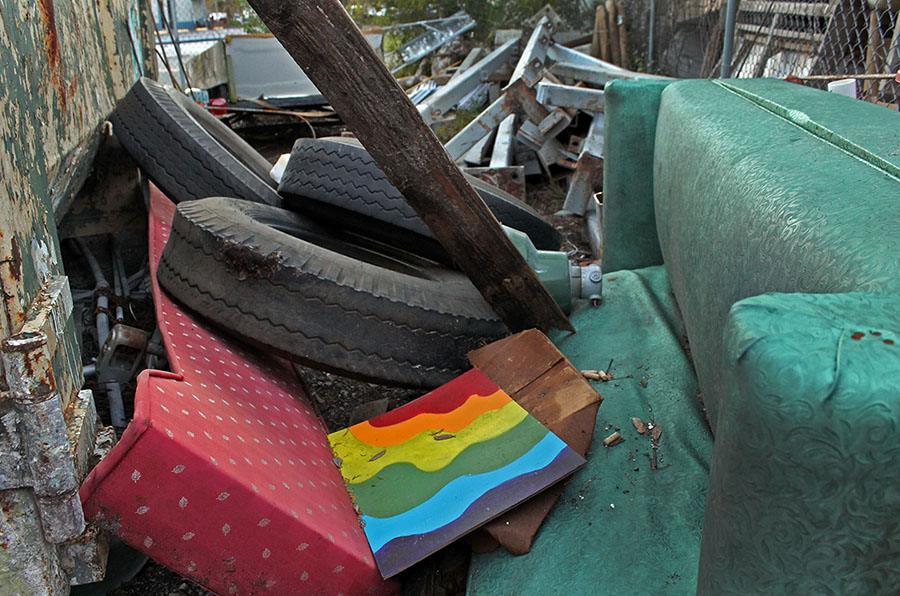 A piece of lost art is left between tires and a textured turquoise couch. Even art can be repurposed for another use if the right person comes along.

The Repurpose Project is now located at 1920 NE 23rd Ave. in the building that previously held Mallard’s Upholstery for more than six decades.

A wall of fabric is hidden in the back of the store. One customer purchased some to make clothing for Barbie dolls to fund her daughter's mission trips.

Mike Myers, 68, illustrates how he created a notepad from an orange juice container. Myers said that the Repurpose Project is the culmination of his dream.

Mike Myers and Nelson Laffey discuss the future of one of the community outreach programs, Laffey’s Fix-It Cafe. The Fix-It Cafe allows anyone to bring in broken items for Laffey to repair, while he also gives instruction on how it's done.

Nelson Laffey, a Vietnam War veteran and founder of Fix-It Cafe, repairs a hygrothermograph that was donated to the Repurposing Project. Laffey has a self-proclaimed “collecting disease,” which goes hand in hand with his ability to fix any forgotten item.

A vintage Remington typewriter is the first thing that catches the eye upon entering the store. Remington first produced typewriters in 1873.

Roman Otmahov, a 28-year-old “Industriology expert,” searches for pipes and plywood. The material is for a collaborative project.

Old doors, foam pads, gold chairs and wooden pallets are grouped together in the outdoor area of the compound. Building materials are rarely in short supply.

Discarded toilets, sinks and mirrors are lined up like fans in the bleachers of a stadium. If desired, a customer could cheaply redo their entire bathroom.

Tim Johnson, 40, plans to build a table for his home out of barn doors. Johnson uses the sliding price scale to negitoate his purchase with Mike Myers.

A light blue set of lockers sits comfortably on its side next to a toddler’s rocking horse. The juxtaposition symbolically emphasizes the different phases of life. 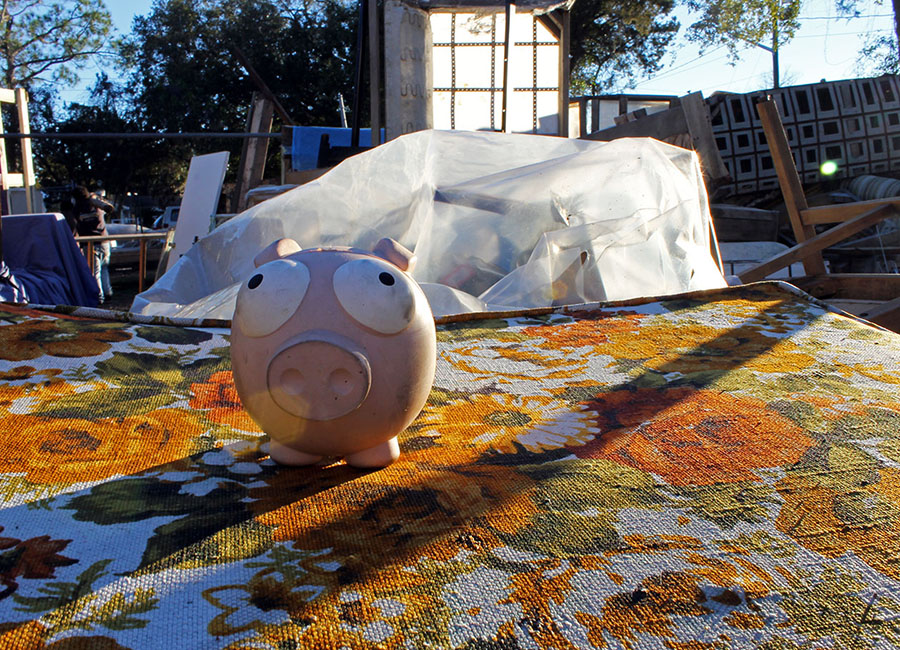 A squeaky pink pig sits in the sunshine on a floral couch. It appears as if it's waiting for someone to give it a new life.

After relocating in December, Gainesville’s “creative reuse center” expanded from 3,000 feet to 13,000 feet.

The Repurpose Project, founded in 2012, is a nonprofit organization that salvages discarded materials for reuse. It has nearly quadrupled in size since its December relocation to 1920 NE 23rd Ave., two doors east of Satchel’s Pizza.

For three years, the project was located at 519 S Main St. in an area locals refer to as the “SoMain artist community.” The project was previously housed by a building that was built in 1929. The building, originally owned by the city and used for bus repair, changed hands a few times before the Mathia family bought it.

In August 2014, the Mathia family sold the building back to the city to build a new fire station, and the project was faced with the challenge of finding a new home. Mike Myers, co-founder of the Repurpose Project and owner of its sponsor organization Bearded Brothers Solutions, began searching for the new location.

After looking at four or five buildings, Myers found the location that had held Mallard’s Upholstery for over six decades. Myers and his co-founder, Sarah Goff, began to develop a relationship with Satchel Raye of Satchel’s Pizza and the area known as Northeast Industrial Park.

“We soon found out it was being referred to as Northeast Indie Park by the artists that are beginning to call it home,” he said. “All of these positive aspects of Satchels, Northeast Indie Park, and a local artist community fit into our business plan and the Mallard building became our first choice.”

Myers and Goff went in search of funding after deciding on the new location. Following a year of uncertainty, one anonymous family purchased the Mallard building. They now lease it to the project.

“We managed to move everything at the same time that we were setting up the new building,” he said.

“Our deadline was Oct. 31 and we made the last load on Oct. 31, Halloween Day, and were open at the new Repurpose Project the next day.”

The move has brought many positive changes for the organization, Myers said. The relocation has allowed for expansion, strategic partnership opportunities and new customers. Myers said the move was a blessing.

“Now we’re in a much better location in a much bigger building, and things are going a lot better,” he said. “It works for them, and it works for us.”

With the motto, “Buy used, save the planet,” the Repurpose Project works to reduce industry impact on the environment through conservation of water, energy, shipping, packaging and raw materials.

“We’d like to take what we divert from the landfill and offer it up for creative reuse to artists and individuals in the community, so that it can have another life,” he said.

The store has a never-ending inventory of items: office and art supplies, party supplies, wires and discarded electronics are scattered throughout the building.

The Repurpose Project uses a sliding price scale to make the recycled items affordable to everyone, Myers said. Known as backward bargaining, patrons are given the opportunity to choose what they think an item is worth, so that people of all income levels can reap the benefits of buying used.

“A homeless person can buy something like a flashlight for 50 cents, and someone else might say that it’s worth $3. It’s all a donation to us,” Myers said. “We probably get more money that way, because people are generous. They like what we’re doing and they want to support us.”

Emily Bonani, a 21-year-old sculpture major, has been purchasing materials from the project for two years. During her last venture to the compound, she bought two steel doors that she reused to create a double-sided planter.

“I like the initiative to salvage old materials,” Bonani said. “Everything is no longer being used for its original purpose, and I love the idea of creating a new life for it.”

The anchor of the success of the Repurpose Project is the Gainesville community, Myers said.

“When we have excess proceeds from our sales, we blend that into the community through education about sustainability by doing projects with students so that they can understand that there’s other ways to use what’s thrown away,” he said.

Sharon Althouse, a longtime volunteer at The Repurpose Project, believes in the mission of the project and loves interacting with the customers.

“I love opening up and seeing things that come in,” she said. “It’s like a treasure hunt every day.”

The move has brought a brighter future for the Repurpose Project, which intends to make use of its new space backyard by building a garden, a kids play area and a permanent event area.

“It’s being paid forward by everybody. The community, us, everybody,” Myers said. “And sustainability is the winner.”

Ashley is a reporter for WUFT News and can be contacted by calling 352-392-6397 or emailing news@wuft.org.
Previous Future Uncertain For 320-Acre Dixie County Hunting Preserve
Next Bo Diddley Plaza Renovations Bring In New Era

Commissioners passionately expressed their disappointments, concerns, rebuttals and hope for the future before unanimously approving a motion to add a discussion of racial and equity disparities to the agenda of the next joint meeting.