By Cresonia Hsieh and Sarah Daly

Captain Sean Daugherty has navigated through the manatee-filled waters of the Crystal River in Citrus County for as long as his 30-year-old mind can remember.

A Crystal River native, Daugherty used to spend his family summer vacations swimming alongside the stout, slow mammal. He said back then, there were only about 50 manatees in Citrus County. This was in the ’80s.

Now a captain and in-water tour guide for River Ventures Manatee Tour Center, what Daugherty doesn’t remember is the U.S. Fish and Wildlife Service (FWS) shutting down some of the city’s springs as often as it does now.

“Personally, I think they’re going to shut down the spring indefinitely,” Daugherty said.

According to the FWS, Crystal River has over 70 springs located in Kings Bay Springs/Crystal River and is home to about 600 manatees from November to March, making it the largest natural winter refuge for manatees in the world.

Crystal River is also the only place Daugherty knows of where one can touch wild manatees. This has been the main reason for tourism in Crystal River.

Ivan Vicente, Crystal River National Wildlife Refuge visitor services specialist, has noticed an increase in both manatees and visitors in Crystal River. Vicente said the FWS has been forced to shut down the springs, most often Three Sisters Spring, because of overcrowding for longer periods of time.

Last year, the FWS only closed the springs three times. This year, Citrus County has experienced five closures since November 2014, with the longest one being seven days.

According to Vicente, biologists counted 797 manatees on Jan. 29 in Citrus County, a record breaking number for the county. About 550 of them were in Kings Bay, the headwaters of Crystal River. Before Jan. 29, the previous record was 657 manatees in 2012.

Closing off the area from visitors prevents added stress to the manatees that are often anxious from overcrowding in the springs, Daugherty said.

“When you have hundreds of manatees (in Three Sisters Spring), and then you add the human element of another 50 to 100 visitors at one time,” Vicente said of the 1.75-acre spring, “it’s just incompatible and unsuitable, and we cannot allow that.”

Daugherty said the manatee growth has been huge for tourism in Crystal River. Hotels, restaurants and tourism groups have all benefited from the growth in manatees. He attributes the ban on manatee hunting, idle boat speeds and general manatee awareness to the growth in Citrus County’s manatee population.

Vicente also said manatee tourism has been helping the status of endangered manatees in Citrus County.

“The manatee harassment is actually reducing,“ Vicente said, citing more awareness and dedication from the county to protecting manatees.

“These venues and all these tour shops and tour operators are doing a better job of educating people before entering the water,” he said.

River Ventures, a company that allows guests to swim with manatees, tells visitors to let manatees approach them, and if a manatee does, to only touch it with one open hand — what they call “passive observation.”

Despite the industry’s passive observation efforts, Daugherty said he believes the springs will eventually be closed indefinitely because of stakeholders like the Waterfront Advisory Board and Save the Manatee club. He said these stakeholders are trying to stop human-to-manatee interaction so area homeowners would experience fewer tourists in their backyard.

According to the board’s website, the Waterfront Advisory Board seeks to balance the preservation and enhancement of its environmental resources with businesses and residents.

Despite Daugherty’s concerns of the homeowner group trying to shut down the springs, Phillis Rosetti, Crystal River Waterfront advisory board chair, said her organization is not dealing primarily with manatees right now.

Rosetti said Crystal River experiences more of a crowd control problem than a manatee harassment issue. She is pushing for crowd-control restrictions between boaters and swimmers by talking with the city government.

“When you have your head down in the water, you don’t hear things,” Rosetti said. “You don’t hear a boat coming behind you — boats don’t have breaks.”

Rosetti believes the solution lies in restricting the number of people in the spring at any given time.

Crystal River homeowner and boat owner Tom Klein mimics Rosetti’s sentiments. Klein, who originally came to Crystal River to buy his last house and be near the manatees, said living in Crystal River has not been as ideal as he expected.

“As much as (swimming with manatees) sounds like a very wonderful and pristine experience, it very much is a crowded one,” Klein said.

Like Rosetti, Klein believes there are too many people in the water. He said regulation should first start with figuring out the maximum number of people who should be in the water at any given time. However, he has realized that even with such maximums in place, the issue may not be resolved.

“If you push them out of the springs, you just push them out into the adjacent waterways. You’re just sliding the problem just 100 feet or 100 yards,” Klein said.

Katie Tripp, director of sciences and conservation for the Save the Manatee Club, who received her Ph.D. in veterinary medical sciences from the University of Florida, agreed with both Rosetti and Klein that there are too many people in the water.

However, unlike Klein and Rosetti, Tripp said she believes Three Sisters Springs should operate as a winter sanctuary and people should not be allowed to touch manatees.

Crystal River is a place where manatees come to seek shelter from the cold, and migrating there is a matter of survival, Tripp said.

“I think a lot of them tolerate (it) because they know it’s a life-or-death decision. They can be annoyed or go out and die essentially,” Tripp said, citing a manatee may be so disturbed it may be forced to leave the warm waters of the springs and die from the cold.

She also said just because a manatee might not elicit a visible stress response from being touched, a marine animal could potentially be so stressed or exhausted that it is not physically able to elicit a response.

“It’s like being bullied,” Tripp said. “If someone picks on you and picks on you, it takes a toll on you, but there may not be a physical sign of it. Does that mean it’s right?”

Tripp refuted the notion that one needs to touch or swim with animals in order to develop an affinity for them.

“I dedicated my life to manatees and I never went swimming with them,” Tripp said. “It’s ridiculous to think that you have to put hands on an animal to care about it.” 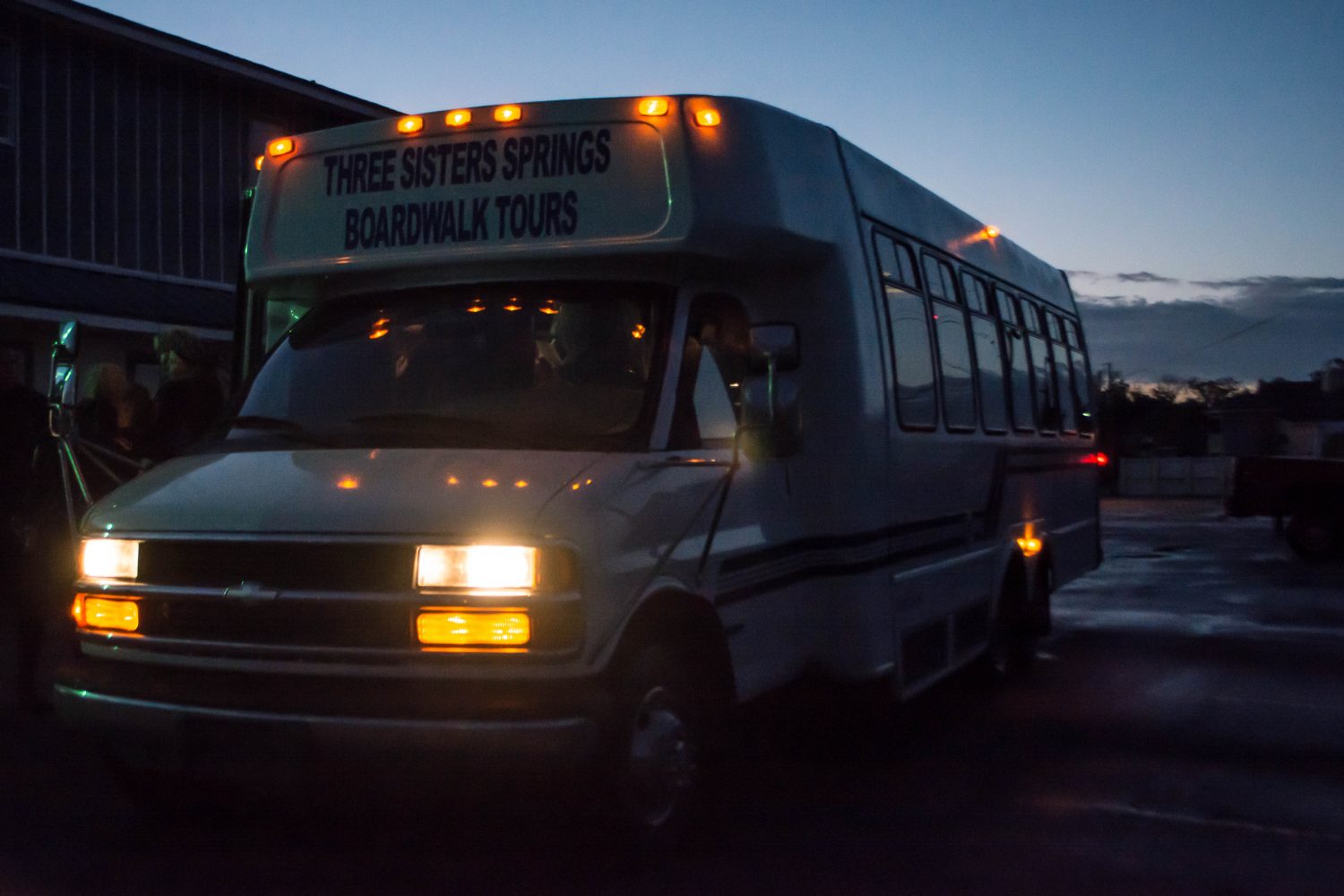 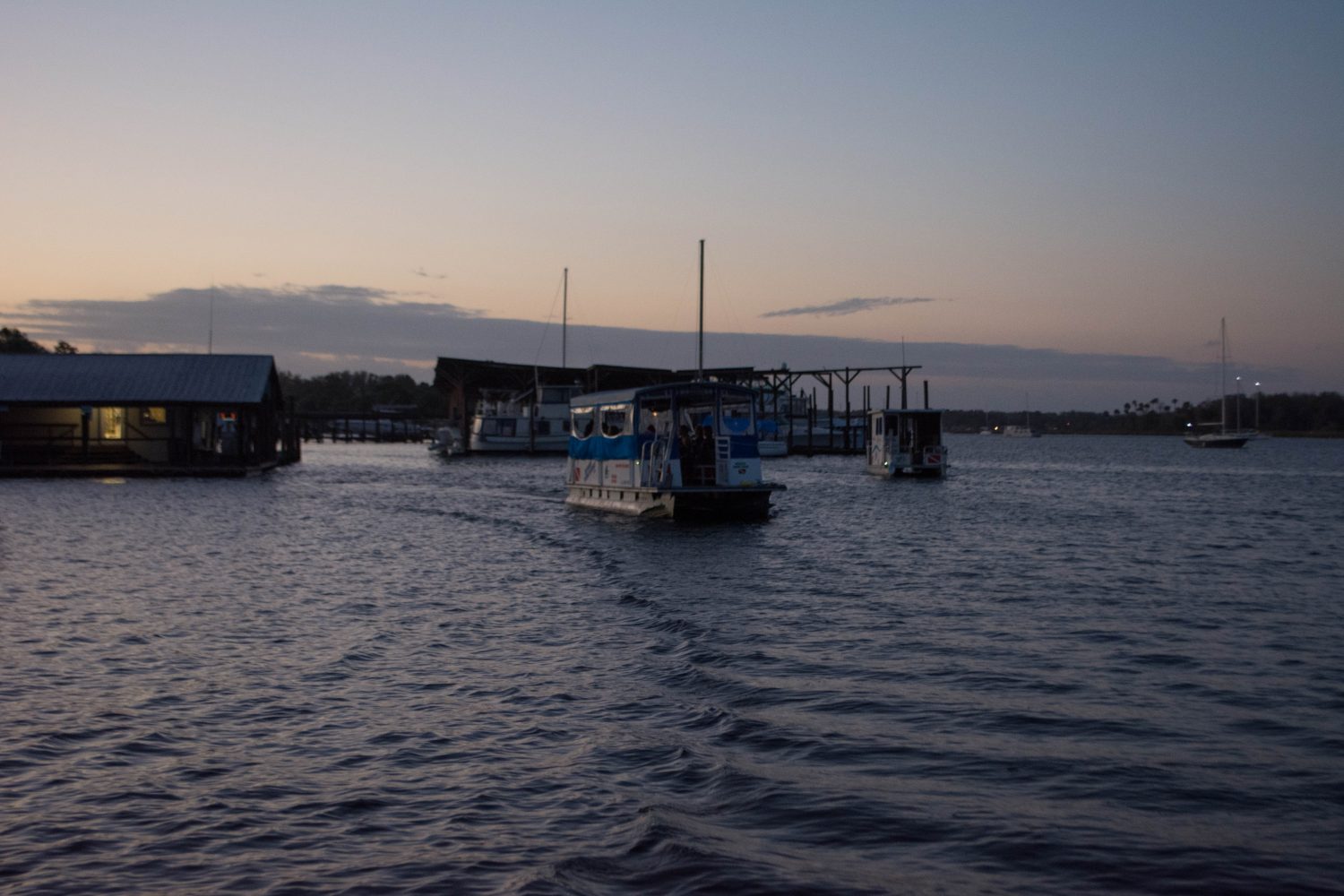 A River Ventures Manatee Tour Center searches for manatees in Crystal River so that guests may interact and swim with the “sea cow.” (WUFT News) 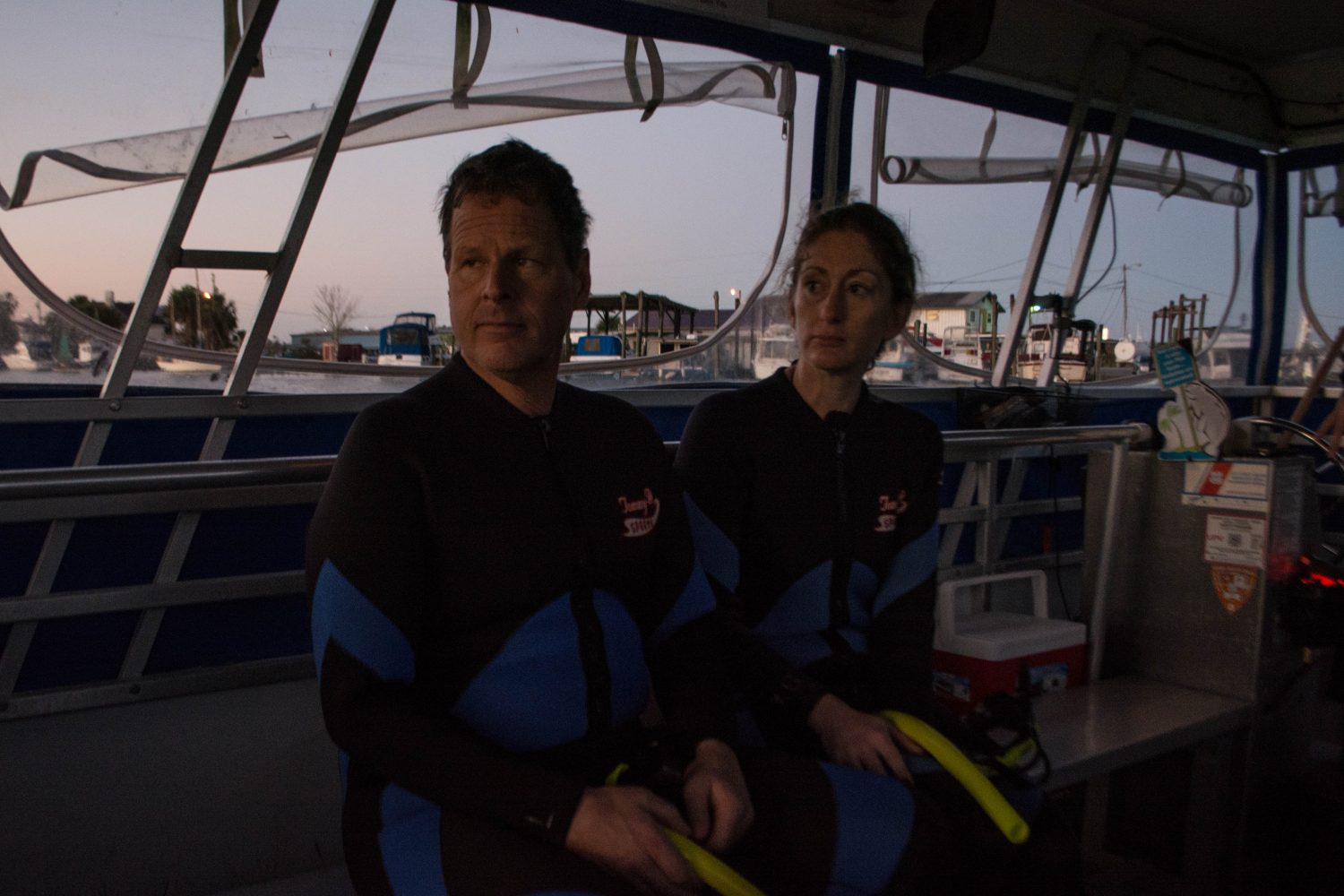 John Welch and his wife Izzy Welch sit in a River Ventures boat hoping to spot a manatee. 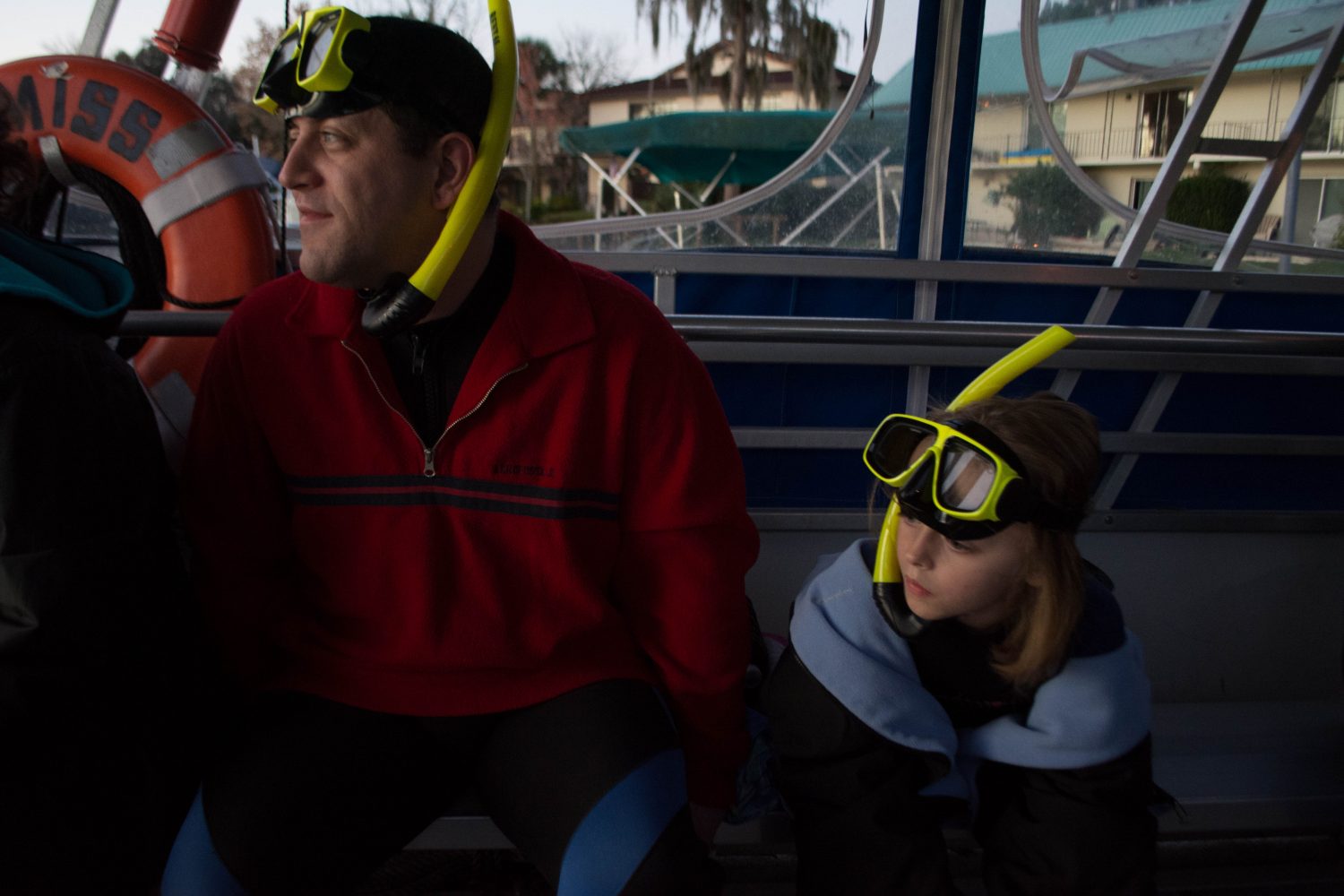 Ralph Zambito and his 8-year-old daughter Leah Zambito sit in a River Venture boat hoping to spot a manatee. 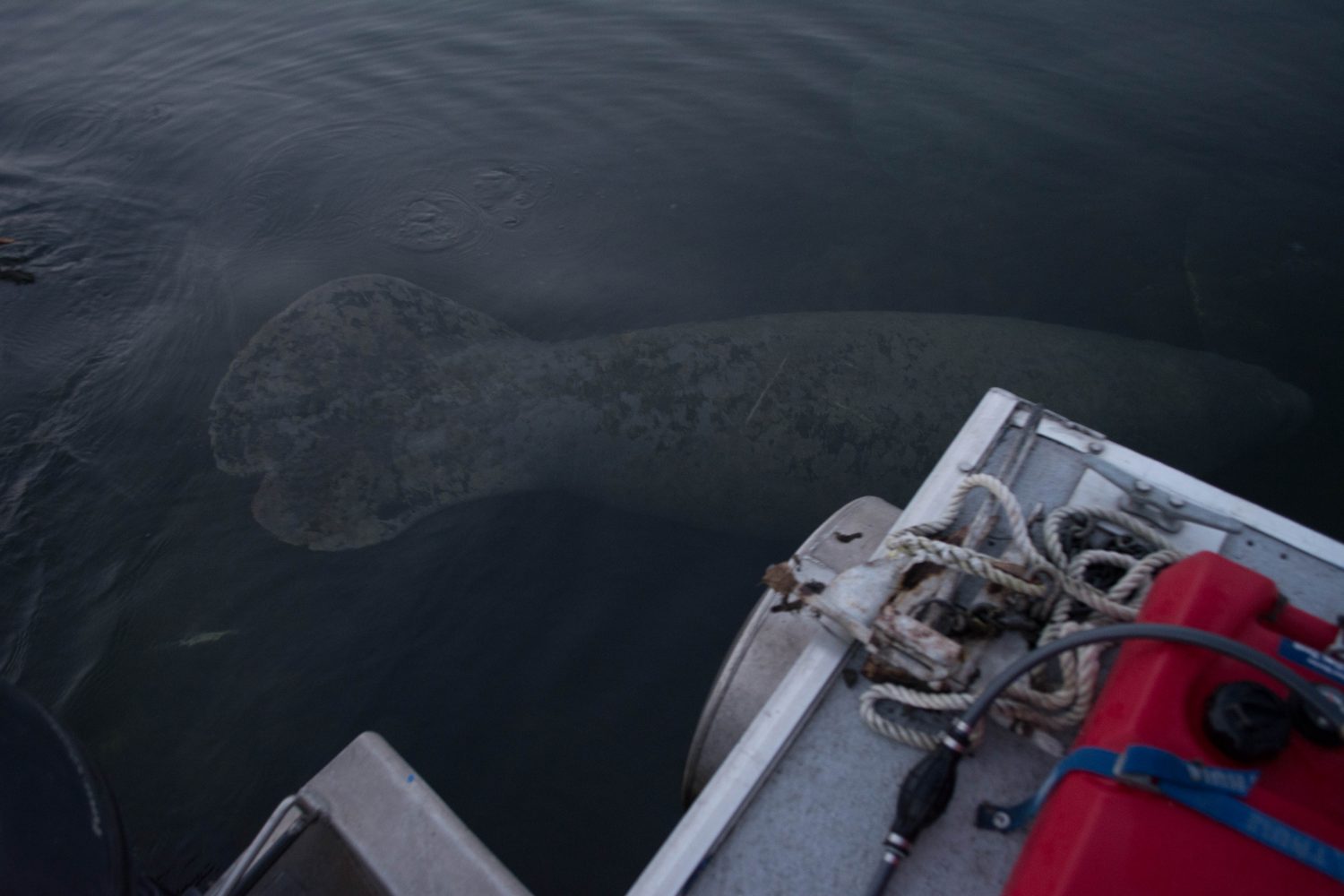 A manatee chases its fellow manatees by a River Ventures boat in Crystal River. 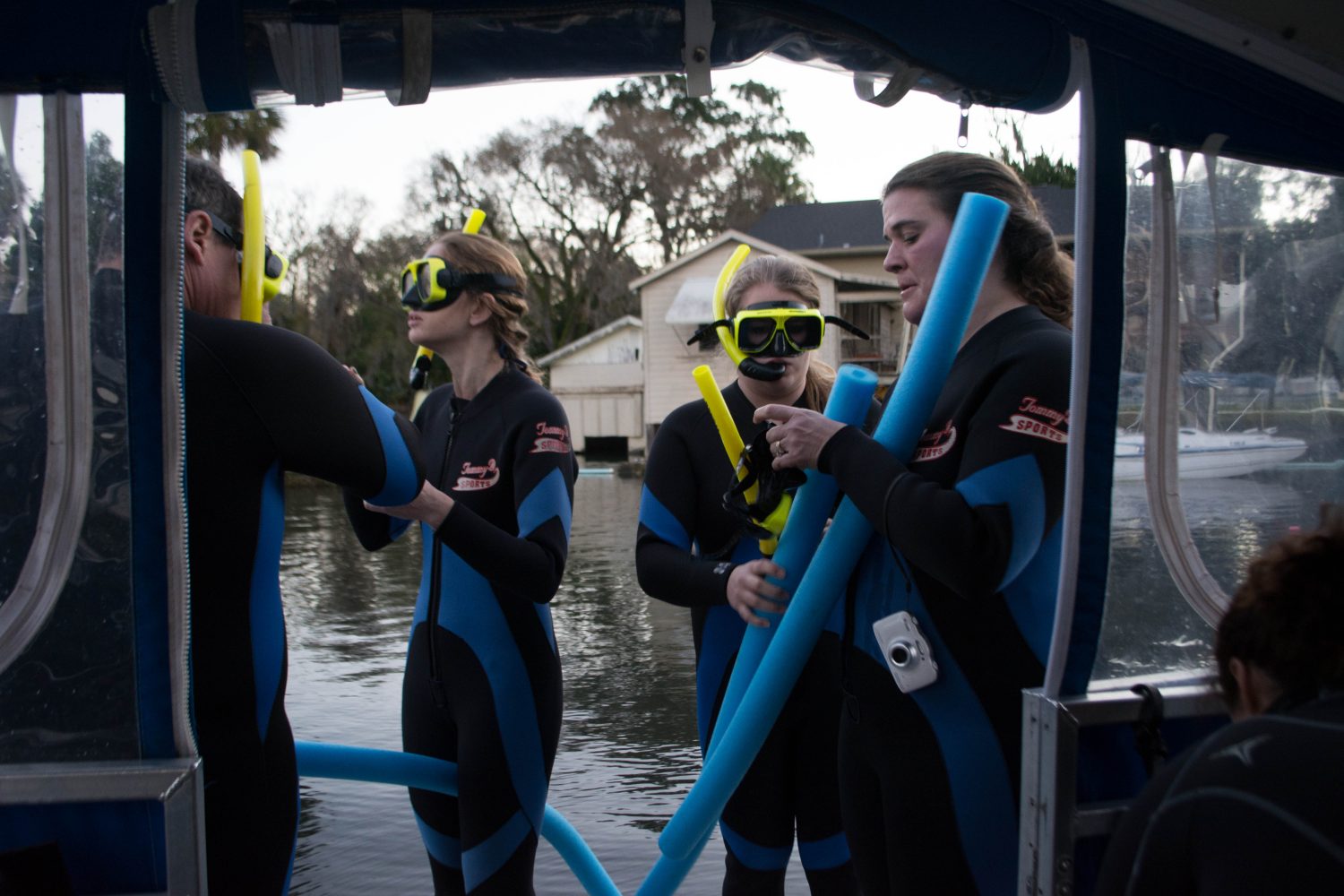 River Venture guests put on snorkels and grab tubes in preparation to swim with manatees in Crystal River. 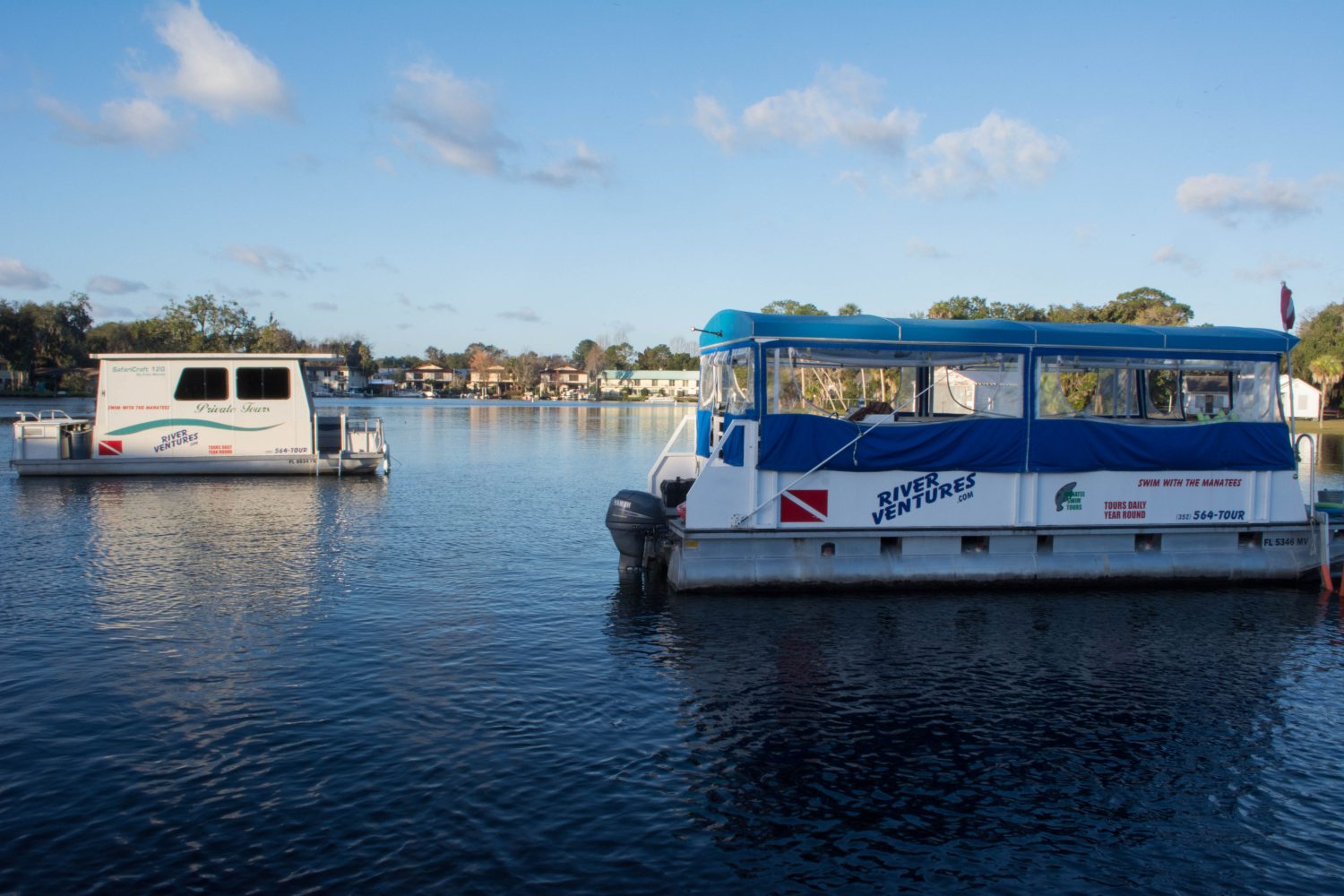 Manatee tour boats wade in the water while their guests swim with manatees. 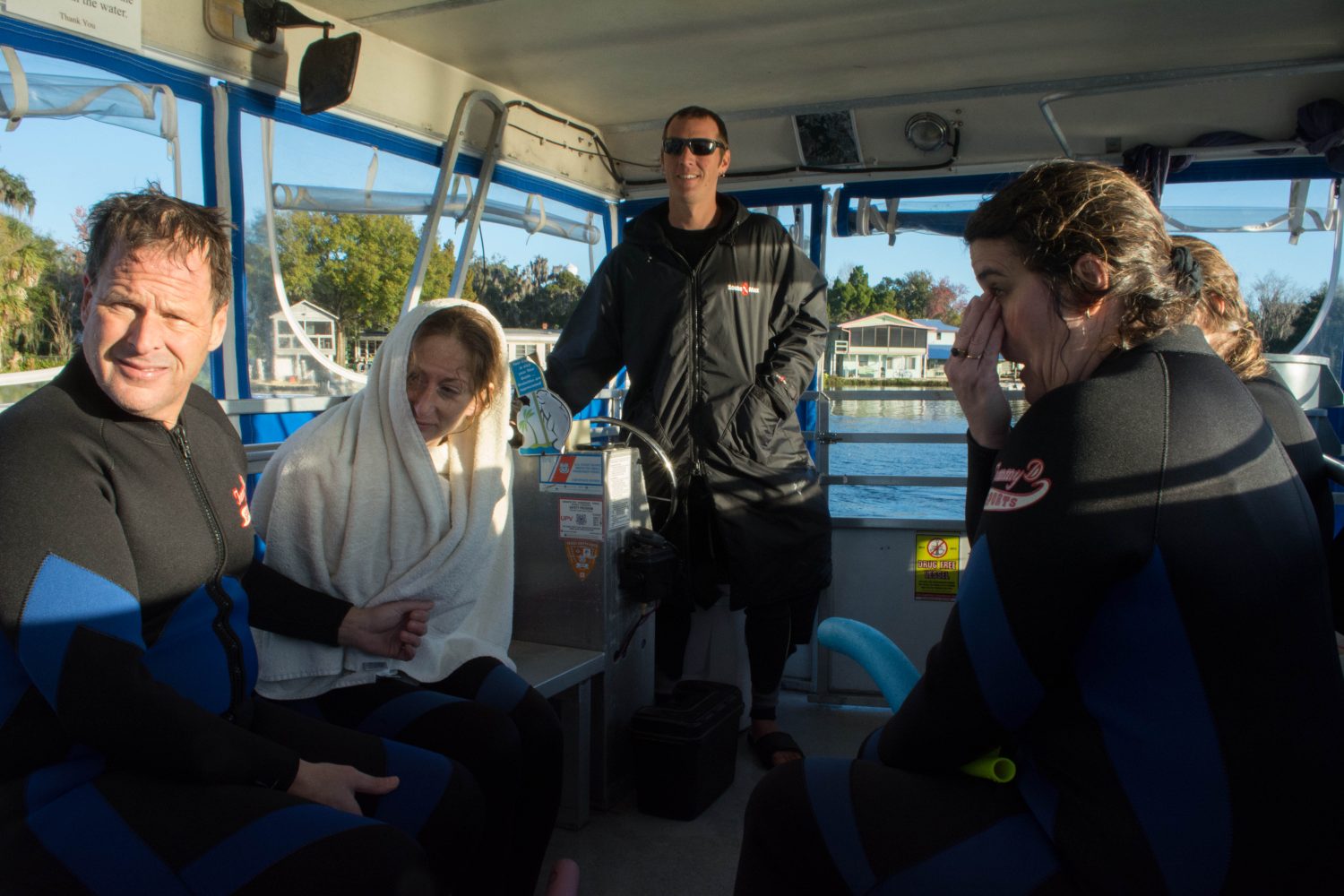 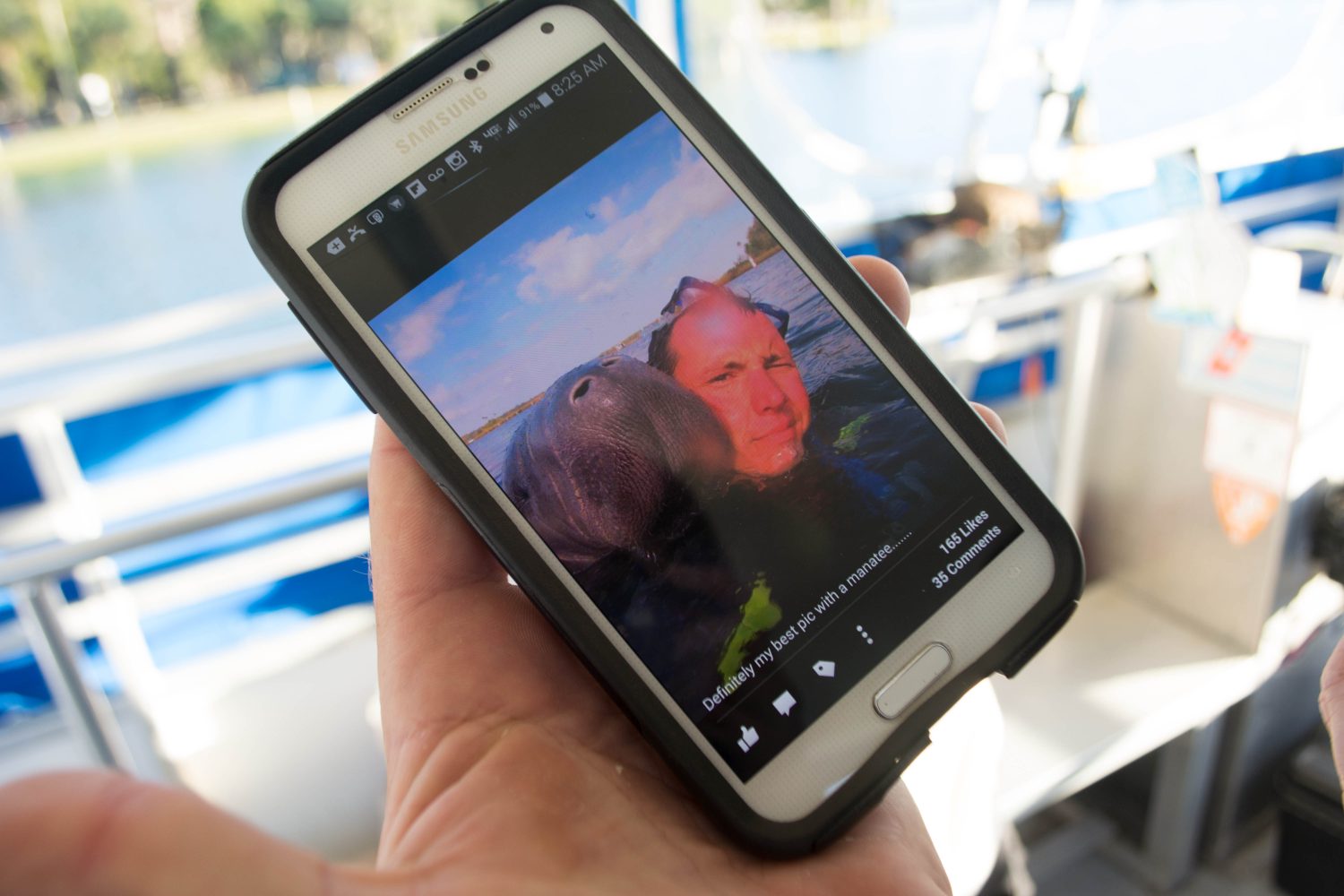 Sean Daugherty holds up a picture of himself and one of his favorite manatees “Snuffy.” 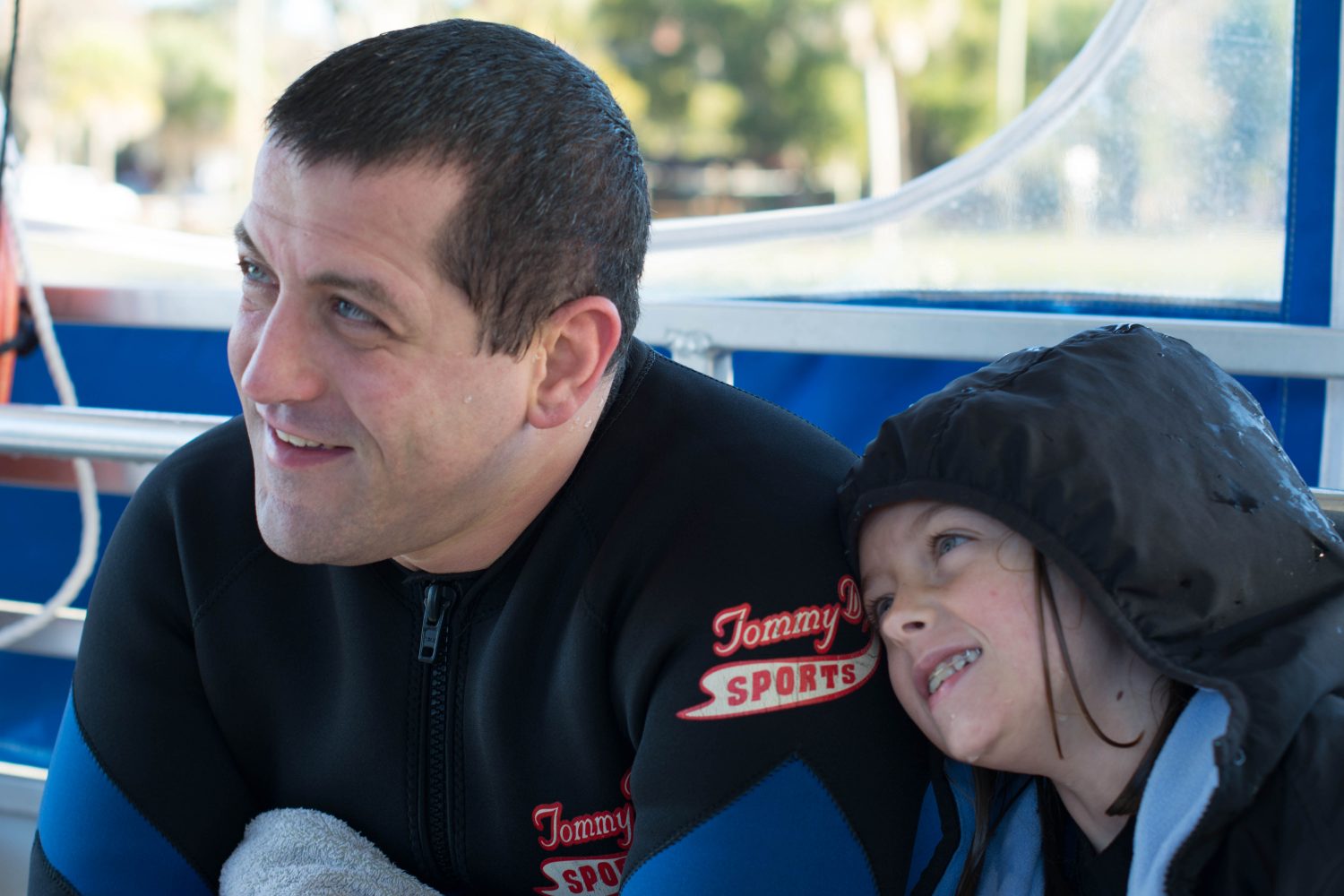 Ralph Lambito and his 8-year-old daughter look out at Crystal River after their River Ventures swim-with-manatees tour. Cresonia is a reporter for WUFT News and can be contacted by calling 352-392-6397 or emailing news@wuft.org.
@@CresoniaHsieh
Previous Feb. 9, 2014: Afternoon News in 90
Next Live Oak Police To Receive Body Cameras; Suwannee County Sheriff Resists Plans