Tis the Season to Give, But Floridians Are Largely Scrooges With Their Time

Bill Brown starts his day as any other.

He hugs an elderly woman and says jokingly, “I love you, but don’t look now or my wife will see us,” as he winks to his wife Verna Brown.

He stands at the end of the line and hugs each and every one of the attendees at the food drop and tells them he loves them.

According to a study released by Wallet Hub, the Browns are an exception in the volunteering landscape — not the rule.

Florida has been ranked 47th in the country for volunteerism beating only Nevada, New York and Louisiana. Utah took the first place, and Nevada is last in the country.

For the Browns, this ritual started 18 years ago when Mr. Brown started giving away food from his own garden.

In 1996 the Browns started the Children’s Table in Bronson, Florida — a mobile food pantry that collects food donations from places like Wal-Mart, Publix and local farms then distributes the food to rural counties all across North Central Florida.

“We realized there was a need for this kind of help in the community when we were foster parents,” Verna Brown says. “We had investigators come to us saying that they had gone to people’s homes even working parents and there was no food in the house.”

Florida was also ranked 42nd in Wallet Hub’s 2014 Most and Least Charitable States study in the U.S.

Wallet Hub is a social media company that aids people and small business owners in making financial decisions and how to save money. It analyzed IRS data, Gallup polls and census data to calculate the results. It analyzed eight factors including volunteer rate, the percentage of the population that donated time and money, and the median contribution to charity.

“We don’t feel that there is such a low rate here,” said Amy Azoulay, United Way of North Central Florida’s Communications Manager. “We are very grateful for all of the volunteers who work with us which can be a lot on a daily basis.”

Florida is making strides to become more charitable. It was ranked in the top five for highest growth in charitable giving from 2006 to 2012 according to Wallet Hub.

America is a very charitable country as a whole.

“America was tied with Myanmar in number one most benevolent country in the world,” said Jill Gonzalez, spokesperson for Wallet Hub.

The National Philanthropic Trust reports that 95.4 percent of households in the US donate to charities, each contributing an annual average of $2,974.

According to the Corporation for National Community and Service, more than 16,000 people of all ages and backgrounds volunteer in Florida, volunteering at more than 1,700 locations throughout the state.

“We wanted to see if the change in economy had anything to do with the outcome of how many people would be giving to charity this year,” Gonzalez said.

According to National Center for Charitable Statistics, there are more than 1.5 million nonprofits registered in the U.S. About 110,000 of those are registered in Florida.

Brown was in the top 20 finalists in the nation for the living recipients of the Medal of Honor for his work with the Children’s Table. In 2011 his granddaughter nominated him for the award.

The 85-year-old and his wife Verna are retired and spend their days, along with other volunteers, collecting donations and distributing food all across North Central Florida.

But for Mr. Bill the awards and recognition aren’t a huge priority.

“I just come every week for the hugs,” Mr. Bill says.

Alex is a reporter for WUFT News and can be contacted by calling 352-392-6397 or emailing news@wuft.org.
Previous Equipment Malfunction Cancels Flights at Gainesville Airport
Next Florida Forever Program Confirms 2015 Priority List 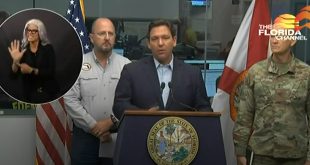