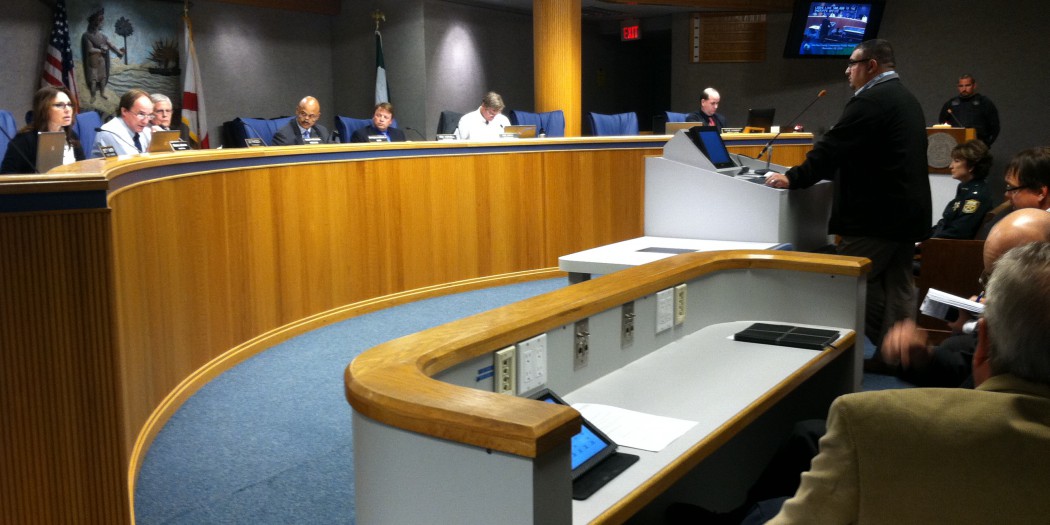 The Alachua County Sheriff's Office came before the board to request additional funds at the county commission meeting Tuesday. A motion to allocate $500,000 in capital outlay was passed 4-1.

The Alachua County Sheriff’s office came before the board to ask for a total of $970,000. Of that amount, $500,000 was requested for replacement vehicles, and the remaining was intended for a three percent salary increase.

Commissioners Lee Pinkoson and Mike Byerly were involved in a heated discussion regarding the allocation.

Sheriff Sadie Darnell asked for the money after pointing out that every other county representative, excluding jail employees, had received a three percent pay raise. Darnell said she felt it was hugely unjust to exclude officers from additional pay.

“They do not deserve this lack of respect from the commission,” Darnell said. “I’ll stay here tonight until we have this discussion publicly and honestly.”

Deputy Tommy Willcox, of the ACSO K-9 unit, openly spoke about his family’s need for an increase in his pay.

Willcox said he and his wife are not in public service positions for the money. They do it because they are passionate about people. Willcox and his wife take in foster children in addition to raising their three biological children.

“Think about our children, our families and our lives,” he said.

Although some members of the board were sympathetic to the cause, not all commissioners agreed with Willcox’s stance.

Byerly did not find it appropriate to allocate additional funds after the sheriff’s office had spent the previously allocated funds on K-9 units, vest and weapon replacements, increased utilities and software upgrades. Byerly said it is Darnell’s responsibility to decide how the budget is spent. She can increase pay whenever she feels necessary.

“The county commission does not give or take away pay raises to county officers,” he said.

Chief Deputy Colonel David Huckstep of ACSO said the agency has cut down on spending as much as possible.

“We have tightened up,” Huckstep said. “We have nowhere else to turn.”

Ultimately, a motion to allocate $500,000 to Sheriff Capital Outlay — in this case, for patrol vehicles — was passed 4-1, with Byerly as the single vote against.

Overall, Darnell was not happy about the meeting’s outcome.

“It’s disappointing,” she said. “I do, overall, believe because of Commissioner Cornell on board, a new county manager coming on board and also the fairly new OMB (Office of Management and Budget) Director Tommy Crosby, it’s a new day and a new opportunity.”

Katelin is a reporter who can be contacted by calling 352-392-6397 or emailing news@wuft.org.
Previous Alachua Residents Ready For New Grocery
Next Gainesville Tech Startup Paracosm Receives $3.3 Million In Seed Funding