Home / World / From Gainesville with Love and Jacmel Haiti

From Gainesville with Love and Jacmel Haiti

In the backyard of a large dollhouse, neighbors could hear chanting, drums and screams. If they looked outside their windows they would see the spiritual markings of an ancient culture chalked with Gold Medal Flour.

In the student-ridden part of downtown Gainesville at 301 NW 3rd St., on the corner of Third Street and Third Avenue, a group of 12 Haitian artists performed a traditional Voodoo ritual on Wednesday. This was just one of the events the Haitian visitors put on for what has come to be known as Haiti Week.

From Gainesville with Love (FGWL) is a part of the Sister City Program that connects Jacmel, Haiti and Gainesville, Florida. Jacmel was once the capital of the french colonial empire, which is one of Haiti’s only tourist cities and has been called Haiti’s cultural capital.

David Ames reintroduced the program after the catastrophic earthquake that hit Haiti in 2010 and has acted as director for the last four years. The partnership was formed to educate the two cities about each other by bringing artists and volunteers from Gainesville to Jacmel and Jacmel to Gainesville.

“We wanted to find a small city that had a good cultural scene with arts or music and a similar demographic to Gainesville,” Ames said.

Ames was surprised to find that Gainesville had an existing relationship with Jacmel since 1987. In the beginning years the program flourished. Due to political turmoil between the two countries, the program had become defunct. This is now the fourth trip to Gainesville for the Haitian visitors since 2010 and the artist collective of Fosaj has invaded Ames’ home. Fosaj, stands for Fanal Otantik Sant D’A Jakmel and is a not-for-profit art center in Jacmel, whose mission is to empower people through community arts, education and environmental programs.

“This time around has been very different,” Ames said. “I am not acting so much as a director but as a facilitator. Everyone is coming together to put on each of the events.”

They arrived in the United States on Oct. 27 at Miami International Airport and flew into Gainesville on Oct 28. Their goal was to produce traditional Voodoo rituals through live mural paintings and music produced by Medusa Studios.

During their stay, they visited numerous schools, including Oakridge International School and P.K. Yonge Research Developmental School, where they painted with students and played music. They held performances and art shows at venues like The Jam, 1982 and the local farmers’ market. They also created a live mural painting at the Civic Media Center. On their last day, they held a traditional Voodoo ceremony in the backyard of Ames’s home.

Another goal of the exchange is to sell the work of the Jacmel artists. The leader of Fosaj artist collective in Jacmel is led by Luckner Candio (Prince Luc).

“We don’t have the abilities to explore different cultures as much as others do,” Prince Luc said. “We are able to come here and sell our work so we can learn and continue to collaborate.”

FGWL continues to be involved in community projects in congruence with other not-for-profits, such as the Barrels of Hope earthbag build, in which the group helped build and train contractors to build low-cost, durable housing solutions.

Brad Bulifant, co-founder of FGWL, played back up drums for the Fosaj collective as they recorded a song at Medusa Studios in Gainesville on Nov. 5.

Alex is a reporter for WUFT News and can be contacted by calling 352-392-6397 or emailing news@wuft.org.
Previous Chadwick Banks Executed By Lethal Injection For Double-Murder
Next Nov. 14, 2014: Afternoon News in 90

How To Help Hurricane Dorian Recovery In Bahamas 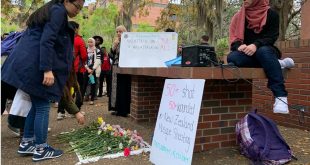 About 150 students, Gainesville residents and community leaders gathered around a prayer mat, listened in silence and held carnations in their hands as a University of Florida student sang. The words were meant to comfort in times of mourning.