Arthur Seabrooks has done away with more than just textbooks since switching schools this year. The 17-year-old has lost almost 50 pounds.

He is one of three full-time students currently enrolled in Loften High School’s new Growing Education Training (GET) program, which caters to students with disabilities who have trouble learning in a traditional classroom setting and are on special diploma track, according to Alachua County transitions specialist David Baines.

Through the program, Seabrooks participates in intensive outdoor gardening activities, which have introduced him to an active lifestyle of clean eating and provided some job-skills. More than a dozen other students from Florida’s exceptional student education (ESE) program visit the site weekly for community-based job training.

“Most of the kids that we have want to work,” Baines said. “They want to feel like they’re part of society.”

The GET program gives them that chance, he said.

This year, the district has begun growing its own healthy food. Loften renovated its two existing greenhouses over the summer using grants and donations totaling more than $50,000 from organizations like Keep Alachua County Beautiful, Lowe’s and the Shively Foundation. Brew said local farms like Forage Farm have also stepped in to lend their expertise.

The state-of-the-art organic and hydroponic greenhouses are now capable of producing 150 heads of lettuce every week, along with other seasonal fruits, vegetables and herbs to be sold to local schools starting in early November. Some schools are also helping to sustain the program by purchasing individual seedlings for use in their own gardens, Brew said. 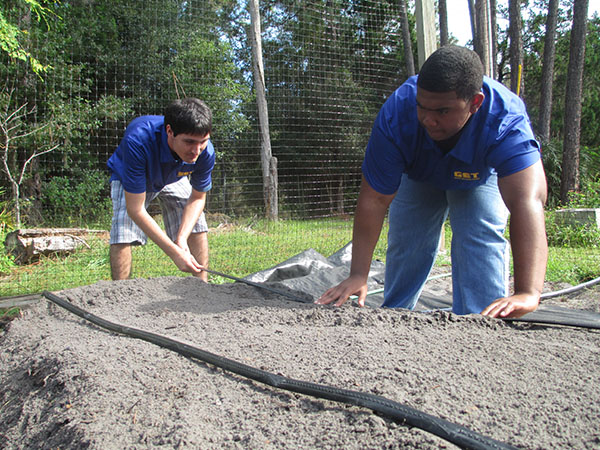 Tudorel Tomlin, 21, (left) and Arthur Seabrooks, 17, (right) lay irrigation tape in the herb garden. The system replaces sprinklers that over-watered certain areas of the garden and left others parched. 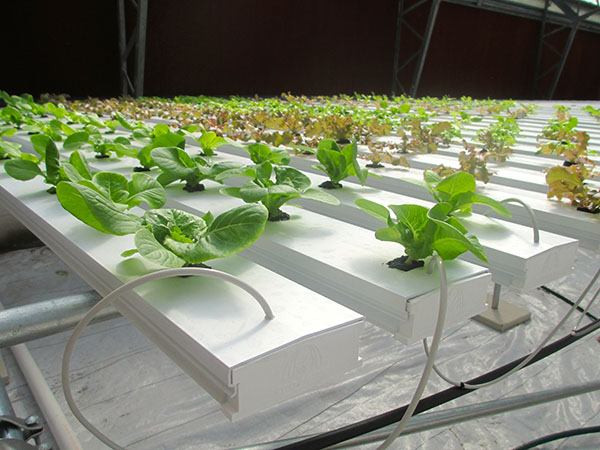 Several lettuce varieties grow on a Nutrient Film Technique table inside Loften High School’s hydroponic greenhouse. The table can produce as many as 150 heads of lettuce per week using only a nutrient-rich solution. 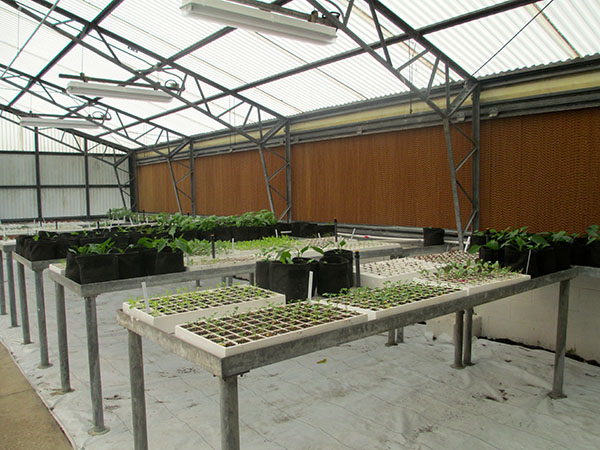 Multiple types of leafy greens and herbs grow in Loften High School’s organic greenhouse. The school will sell the plants for use in other district cafeterias and gardens.

While the farm-to-school initiative is sweeping the nation, Brew said the GET program is the first of its kind.

“The processing that needs to be done and the packing that the distributor would do, we have students doing,” she said. “So, the cost to us is just the basic cost of the supplies, and the payment for the students is the job training and possible certification in these skills. It’s a win-win for both food nutrition and the ESE program.”

Now, Loften is writing the handbook for similar programs in the future.

Baines said the program’s number one goal is to prepare students to enter the workforce. Students are taught how to interact socially and professionally, follow directions and problem-solve in a practical setting — a major departure from the world of true-false and multiple choice.

“Inside the classroom, you sit in there learning little bits and pieces,” Seabrooks said, wiping dirt from the herb garden off his palms. “Out here, you’re learning hands on.”

To Baines, that’s the true essence of education. He said he has seen a profound change in the students’ level of enthusiasm, confidence and productivity since school started just over two months ago. And he’s hoping local employers take notice.

“It’s amazing what some of (these students) can do if given the opportunity,” he said.

Editors Note: The headline and second paragraph of this story have been updated to better reflect the nature of the student’s disabilities.