The Florida Department of Corrections partnered with the Florida National Guard to hire veterans and military personnel who are unemployed.

These specialty hiring events last all day and are open to all branches in the Florida National Guard and Reserves. McKinley Lewis, Press Secretary for the DOC, said there have been seven different events to date in seven different counties ranging from Escambia all the way down to Palm Beach.

“We’re always looking to bring exceptionally qualified staff in to work for the department, and National Guard members—as well as veterans—have that skill set from their military experience that allows them to transition over to the Department of Corrections very well,” Lewis said.

The State Program Coordinator for the Florida Guard Family Career Connection, Penny Justice, said that the specialty hiring events were created out of necessity. She said 48 percent of all guard and reservists were called to be active over the 10 year span that the U.S. was at war with the Middle East.

“Upon return to civilian work, there wasn’t a job for them,” Justice said. “We need to help them connect to employers who appreciate their service to the country.”

Since the hiring fairs launched in June, Lewis said 11 people have been hired, and 146 have applied and are currently being processed. The DOC refused to allow an interview with any veterans that are currently in the hiring process.

Army Staff Sgt. Lavoctris Patterson attended the first hiring event in Orlando on June 26. Of the 55 who attended, he was one of the first veterans to be hired through the DOC’s partnership with the National Guard.

Patterson has been in the Army National Guard for about 15 years and worked in a prison for one of the two combat tours he served in Afghanistan.

He graduated from the University of Central Florida with a bachelor’s degree in criminal justice and worked with the military police for a couple of years, but he said he had a hard time finding a job that reflected his qualifications upon returning to civilian life.

“I thought that I would easily obtain a job with all of my previous experience, but unfortunately it seemed like a lot of people didn’t want to touch me,” Patterson said.

After accepting a job as a high school wrestling coach and then leaving due to the lack of respect he received from his employer, Patterson was out of work for six and a half months, he said.

“It was tough once I stopped working [at the high school]. That transition was pretty hard,” Patterson said. “The hiring event was the first time someone took a look at me.”

On Friday, Sept. 12, Patterson started his first day of work with the Department of Corrections. He is currently training to become a corrections officer and plans on staying with the DOC as long as he can.

“Who knows, maybe in the next 10 years I could become one of the youngest wardens,” Patterson said. “I’m just going to shoot for the stars.”

One of the more recent hiring events was held Sept. 23 in Jacksonville, Fla.

Retired Navy Rear Adm. and Director of the City of Jacksonville’s Military Affairs and Veterans Department, Victor Guillory, said that veteran unemployment affects more than those who have served the country since about 25 percent of the national population has some relationship with the military either through service or a direct family member. 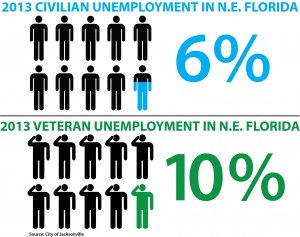 Fortunately, Guillory said more than 230 local Jacksonville businesses have pledged to hire veterans. This is all part of Jacksonville Mayor Alvin Brown’s initiative to connect veterans to employers that recognize what they bring to the table.

“As you know, our nation is again at war. The president announced last week that we are going to continue operations in Syria and in Iraq,” Guillory said. “We will continue to have military members transitioning, and I think it is important for all good Americans to do what we can to help these men and women transition to civilian life when their service is done.”

Erica is a reporter who can be contacted by calling 352-392-6397 or emailing news@wuft.org.
Previous Florida-Friendly Landscaping Saves Water And Fertilizer
Next UF Grad Student Hospitalized with Meningitis