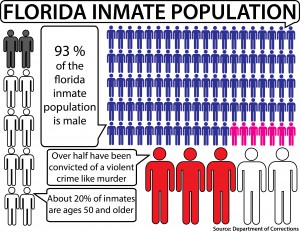 The Department of Corrections launched a Transparency Database on all Florida inmate deaths from the last 14 years.

The database, launched Sept. 9, shows the status of investigations and the manner of death. According to Jessica Cary, Director of the Office of Communications at the DOC, the purpose of the database is to provide information about what happens and to show the appropriate details in order to be transparent.

According to the database, closed cases can be listed as an accident, suicide, homicide or undetermined death. Some cases are still open, so the manner of death is still pending.

Through the use of this technology, Cary said that the DOC has an opportunity to provide greater access to the functions of the department, especially in cases when an inmate dies in one of the facilities.

“There has been some interest on inmate deaths,” Cary said. “This way we’re able to provide all of the information in one location so that anybody who’s interested can look and see, and hopefully it will help answer any questions they may have.”

For closed, non-natural deaths that took place in 2014, summary reports are included. Cary said that investigative case summaries from previous years that are not still under investigation will continue to be added in the coming days and weeks.

Redactions to the case summaries are present due to protected health information, security information and security system plans, Cary said.

DOC is responsible for 49 major correctional institutions that hold more than 100,000 inmates across the state of Florida, according to the database. Over half of the population has been convicted of a violent crime.

These crimes include murder, sexual offense or an aggravated battery. The rest of the population are convicted of crimes like burglary and theft or drug possession, sale or trafficking, according to the database.

“I think [the database] provides a really good snapshot of this [inmate] population,” Cary said. “You’re looking at a population that does not necessarily resemble the demographics of Florida’s general population.”

Florida’s population of inmates is overwhelmingly male. Of these inmates, 93 percent are men, and 21 percent are at or over the age of 50, according to the database.

Many of those inmates have not received regular healthcare prior to custody and may suffer from existing conditions like mental health issues and alcohol or drug addiction.

Chief Deputy at Suwannee County Sheriff’s Office, Ron Colvin, said he sees where the database would help ease any suspicions that might arise about a case.

Colvin said he wasn’t sure the database would affect him or his law enforcement agency since they don’t investigate in-custody deaths at a state prison.

When asked about the transparency database, Steve Arthur from FDLE responded with an email and said, “It would be inappropriate for us to speculate on this matter.”

Cary said the new transparency database is simply another way to provide the public with additional information regarding inmate mortality.

“It would be something that would make it easier for people look up [information] and see what has happened,” Colvin said. “It’s good for families and media who hear something. It gives them a site to go to where they can find out some bit of information.”