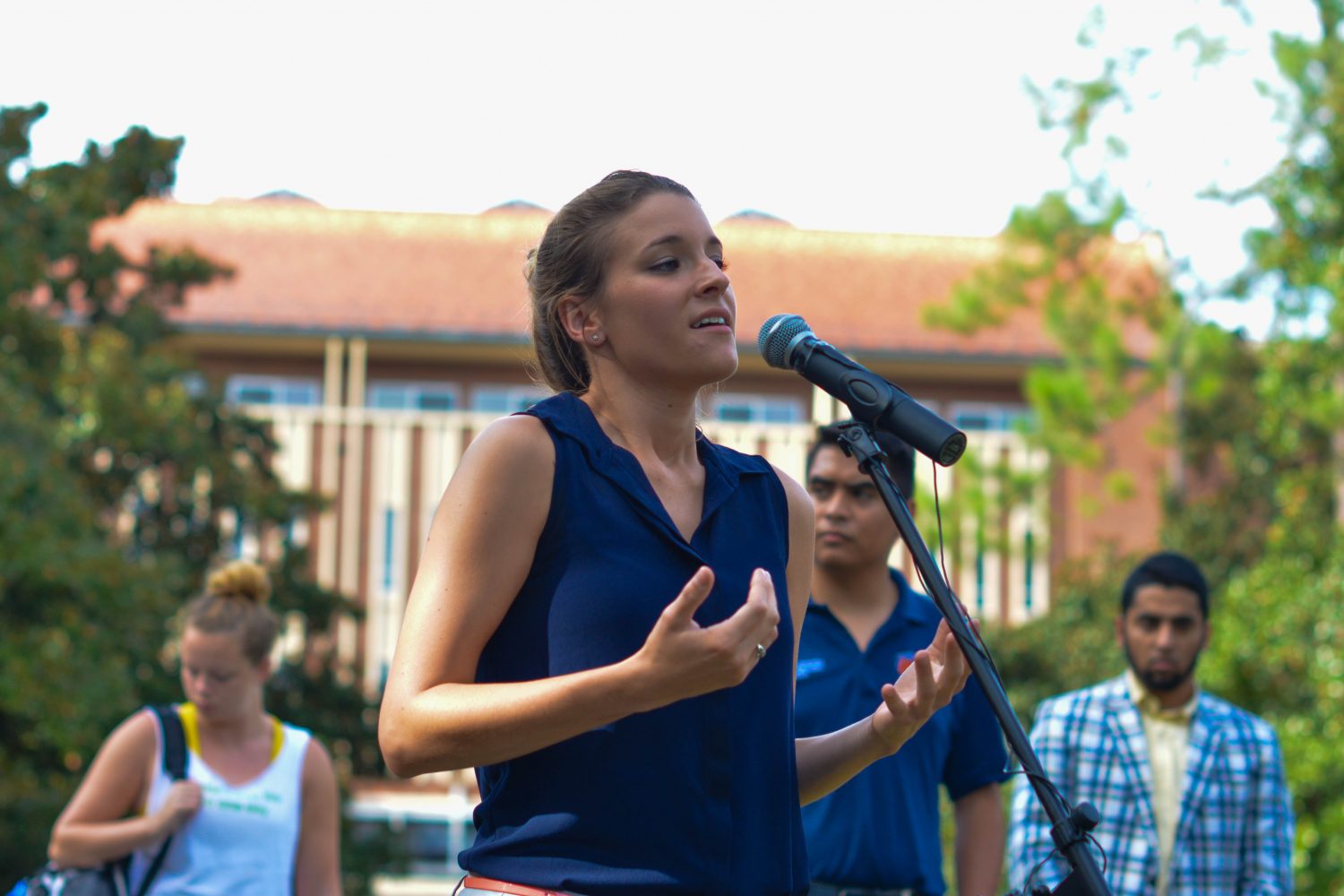 UF graduate student Nikki Steinberger speaking to students about the safety of walking with others.

A plea for solidarity and strength rang out at the No Gator Walks Alone rally held in the Plaza of Americas at the University of Florida on Monday night.

The event, which was planned in less than 24 hours, came about after Nikki Steinberger, a second-year graduate student at UF, was online Sunday evening talking to friends about the recent assaults that have taken place on or near UF’s campus.

“I was compelled to do something, and I know this doesn’t take away what happened this past week, and I know it doesn’t fix anything, but it can make us be a little more proactive moving forward,” Steinberger said.

At the event students signed posters that pledged they would not walk alone around campus and would make sure that others did not have to walk alone either.

“It’s kind of two-fold, one is that I personally will not walk alone back to my apartment or the library or class,” Steinberger said. “Also that no one else will walk alone. We’re all in this community together and so that sense of responsibility and commitment to one another is important.”

The posters will be hung all over campus to act as a reminder of what has happened and to encourage students to walk together.

UFPD Chief Linda Stump spoke at the event to show support for Steinberger’s cause and to help ease the minds of the gathered students. Stump also asked for students help in making sure students stayed safe.

The No Gator Walks Alone rally isn’t the only event being held this week to raise awareness for sexual assault. The student government is currently in the midst of their sexual assault awareness week.

The sexual assault week was planned two months ago, but couldn’t be timelier, Susan Webster, a third-year business and Chinese double major and member of the student government senate, said. She wore a teal ribbon pinned to her shirt in honor of sexual awareness week while attending the rally.

“The whole campaign and being an aware Gator is something that’s great because this is something that Gators will be able to graduate with and take with them for the rest of their lives,” Webster said. 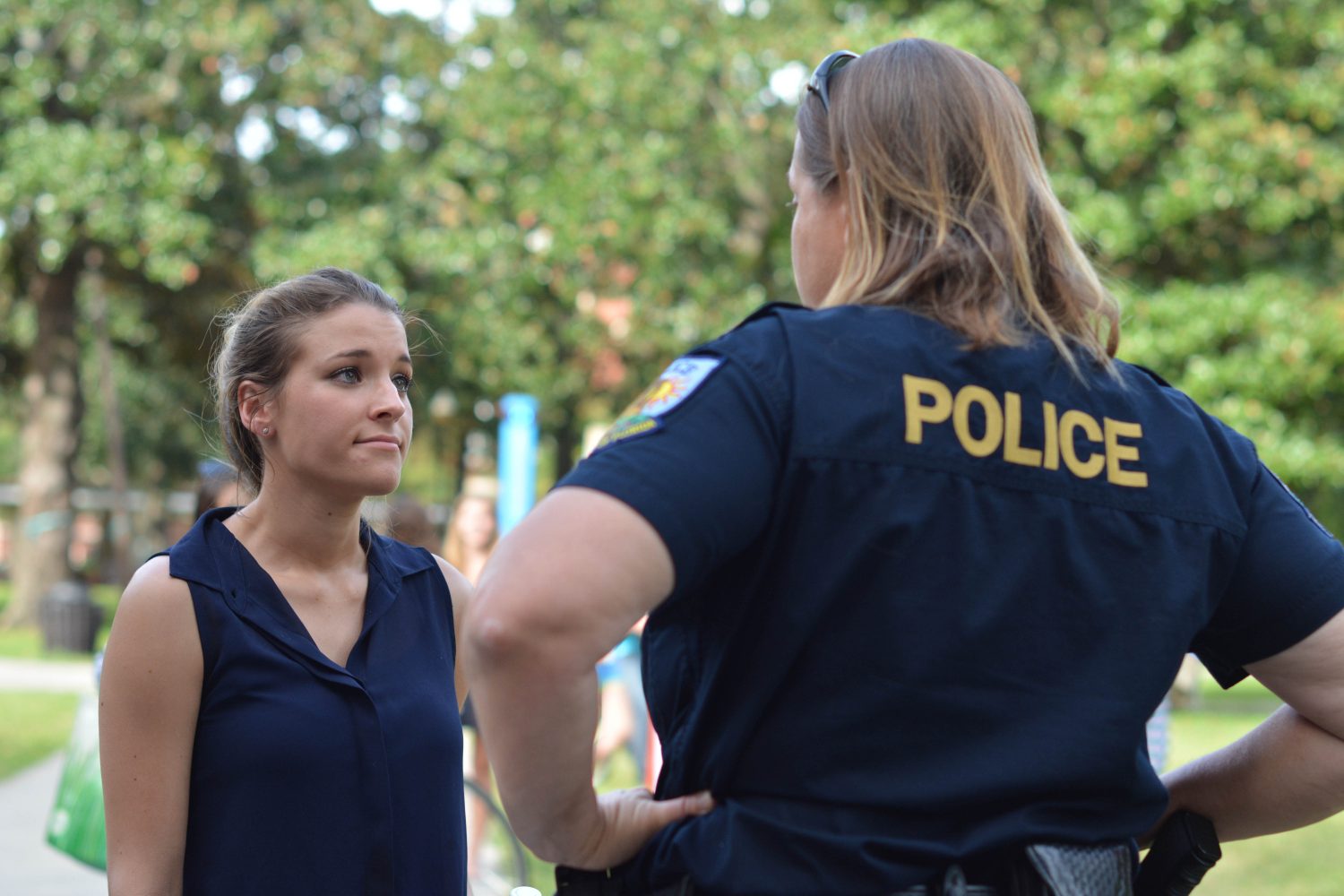 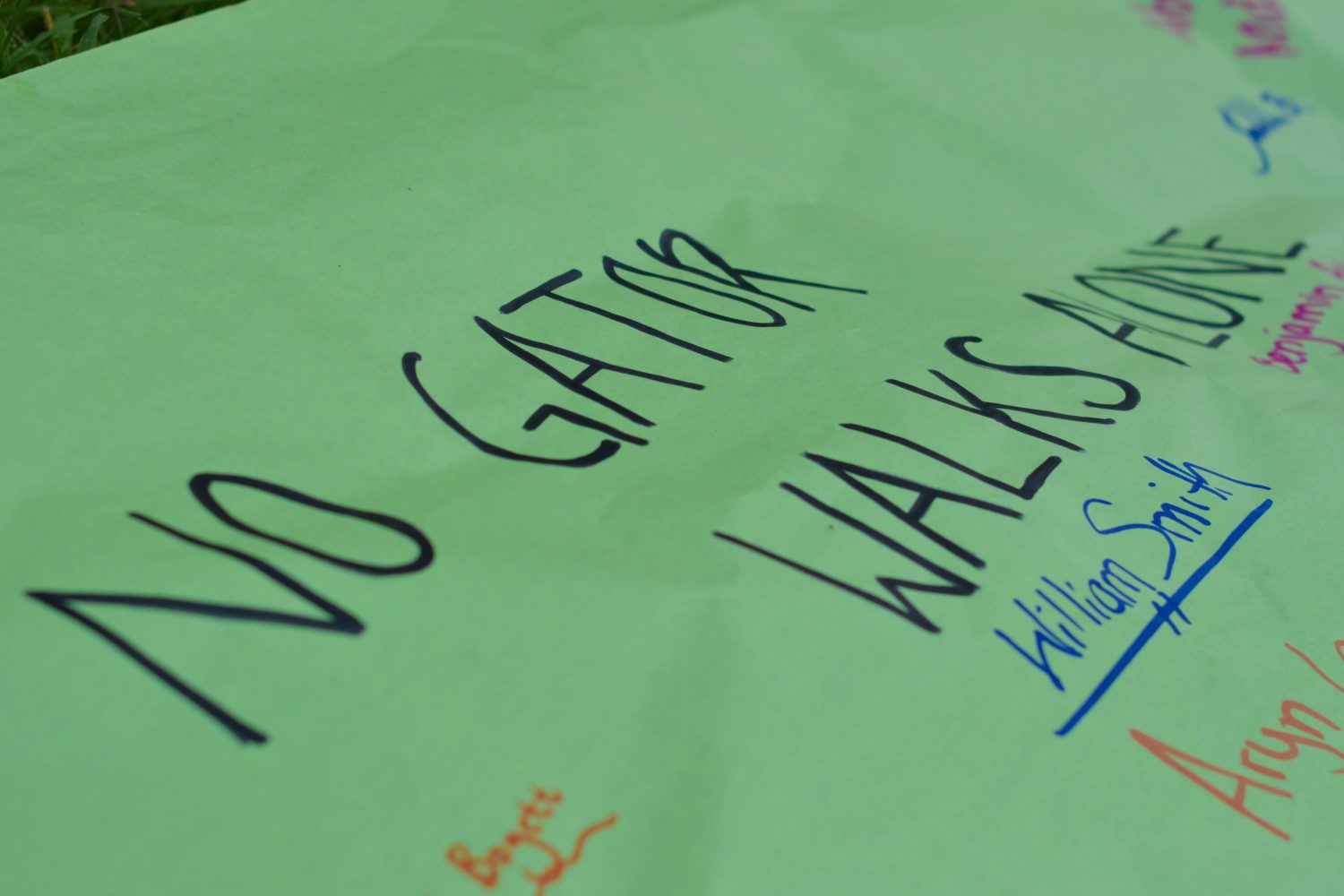 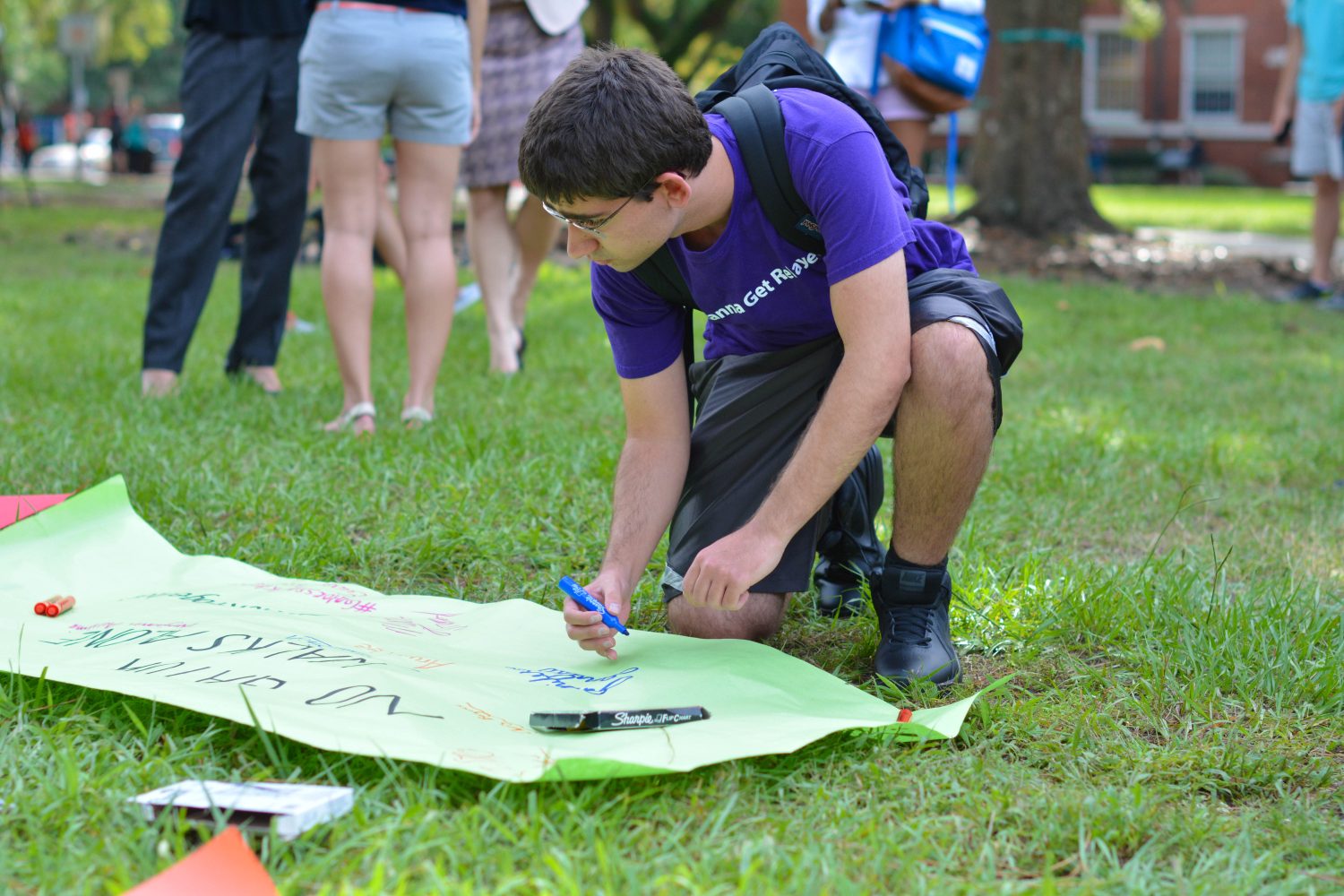 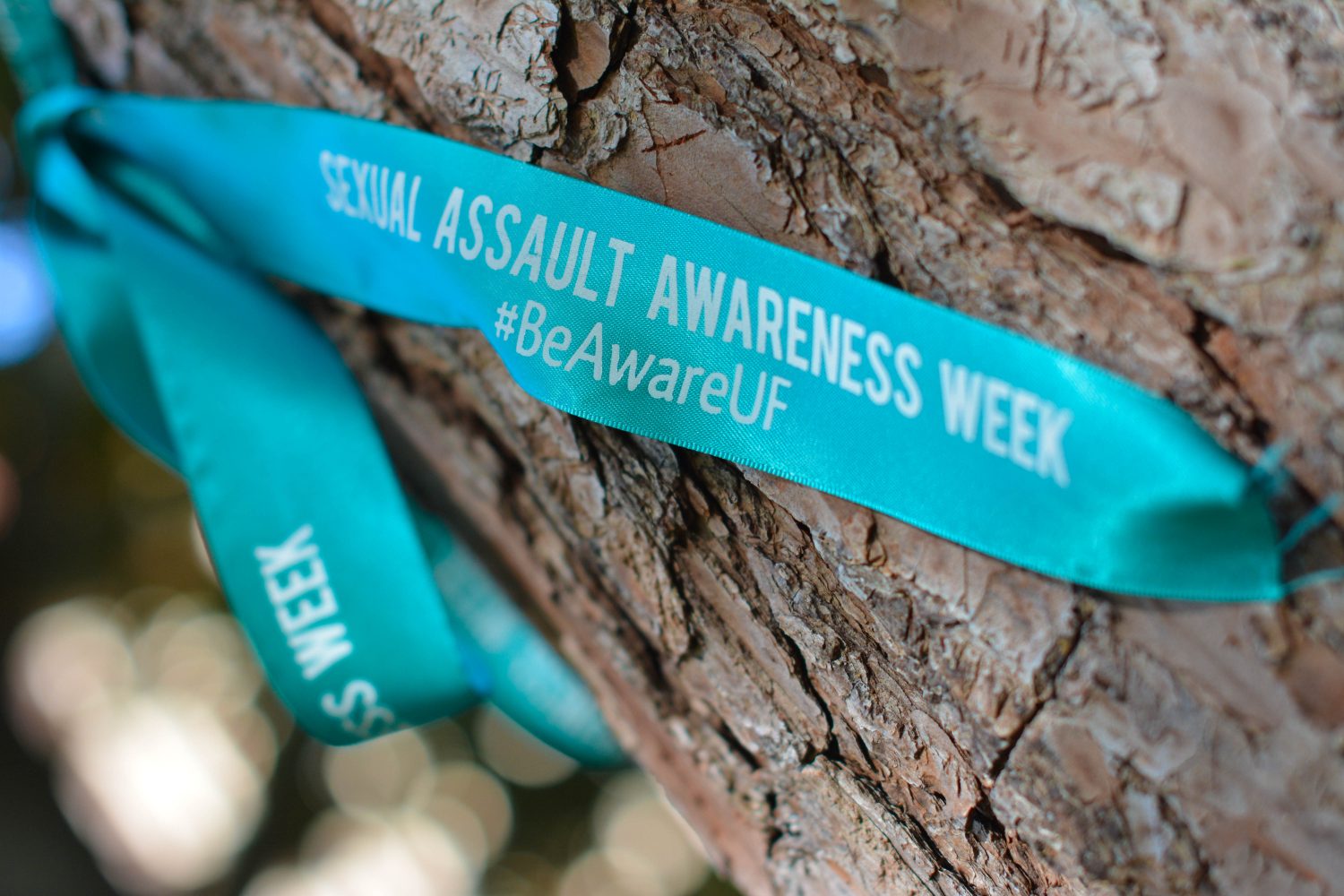 Over 2,000 yards of teal ribbon have been cut and distributed around campus in honor of UF’s sexual assault awareness week. Many of these ribbons can be spotted around university trees. 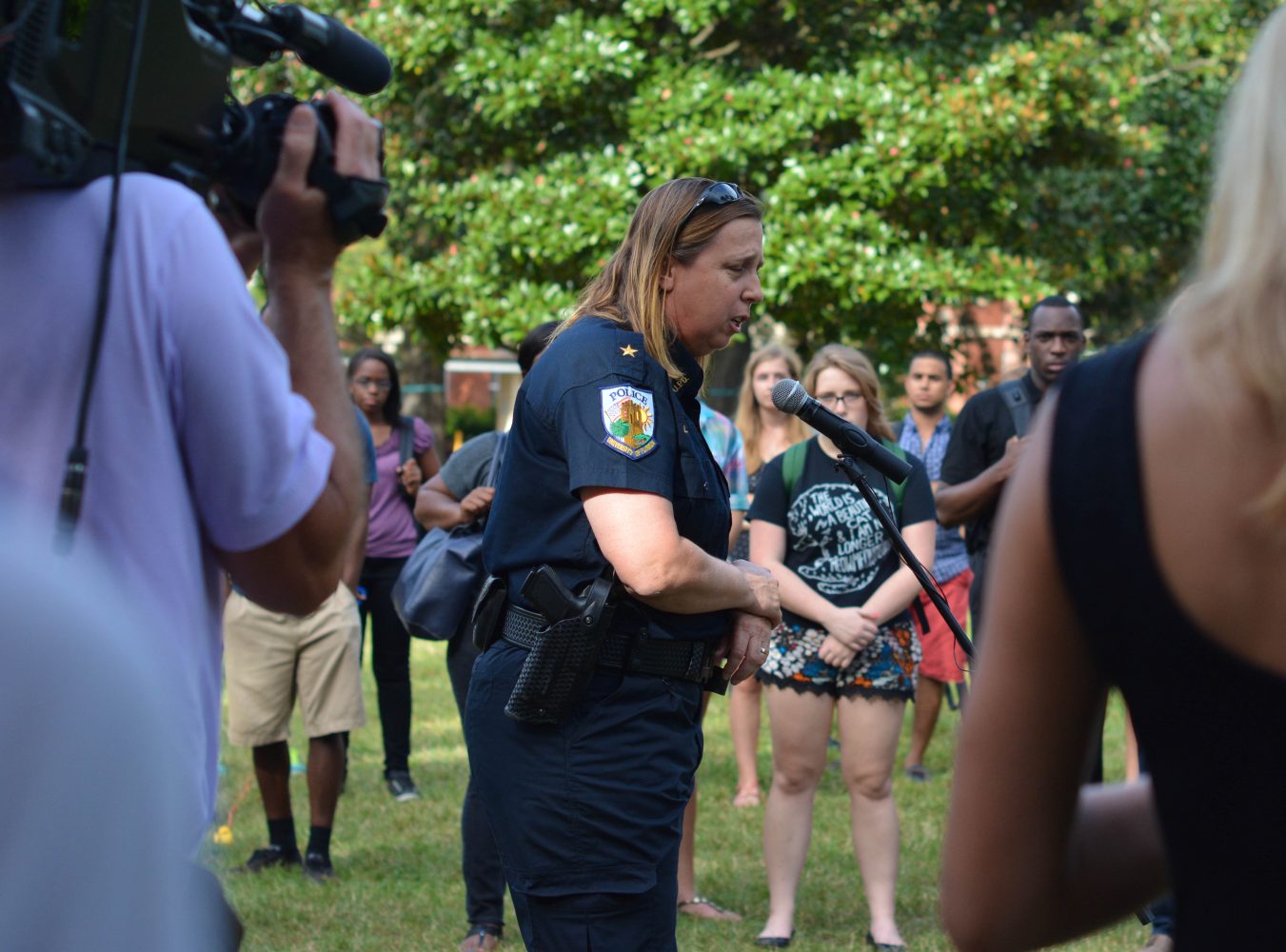 University of Florida police chief Linda Stump reminds students of their personal responsibility to pay attention to their surroundings and look out for the wellbeing of fellow students. 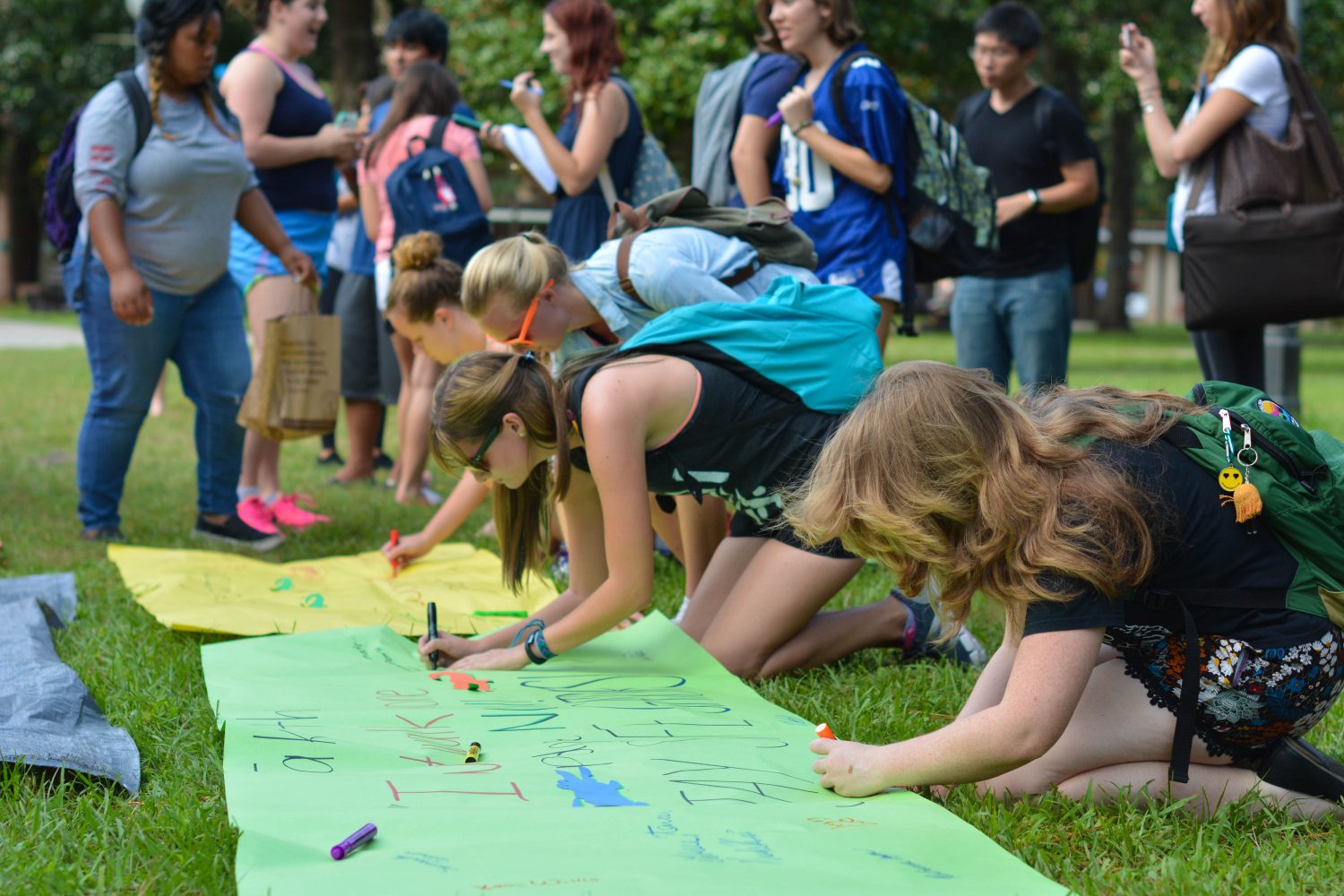 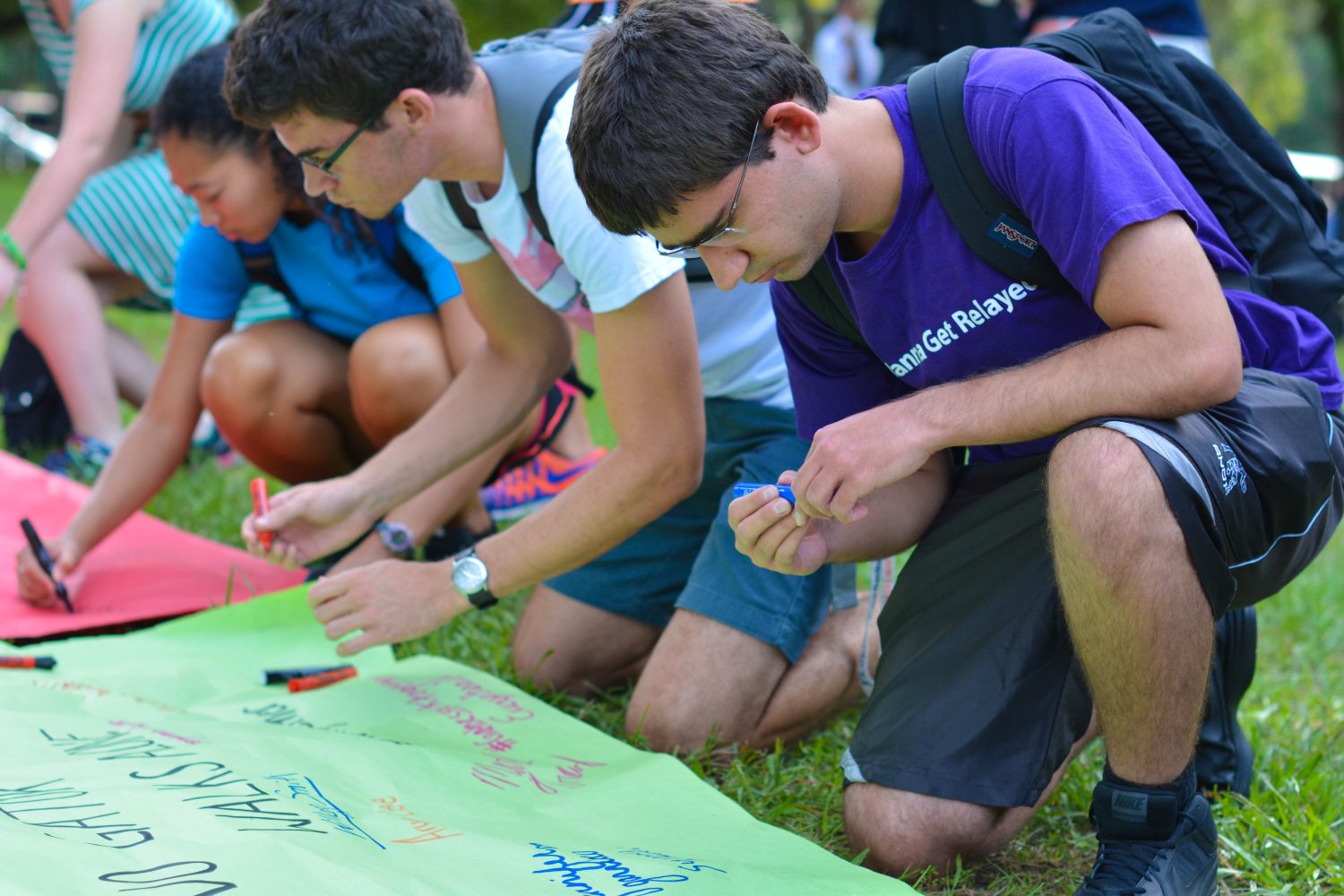 Students sign the “No Gator Walks Alone” banner to pledge to support and look out for fellow Gators.

20-year-old Chinese and Business major Susan Webster signs the “No Gator Walks Alone” poster in the Plaza of Americas.

20-year-old Chinese and Business major Susan Webster signs the “No Gator Walks Alone” poster in the Plaza of Americas.

Jennifer Garrido, 20, of Melbourne, Fla. signs the “No Gator Walks Alone” poster in the Plaza of Americas.

Bethany is a reporter for WUFT News and can be contacted by calling 352-392-6397 or emailing news@wuft.org.
Previous City of Hampton Kicks Off New Era with First Election In About a Decade
Next Plane Rerouted from Gainesville to Jacksonville Airport