By Whitney Lavaux and Leah Harding

The Alachua County Commission held a special meeting Thursday to consider funding renovations and construction for the Alachua County Fairgrounds. The commission, however, wants evidence of a return on the investment.

The first would cost $14.3 million and consist of a complete overhaul of the facilities at either the current location or at a new location on the Wesemen Tract. 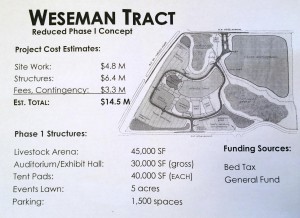 Alachua County bought the Wesemen Tract property for $2 million, however it is subject to a reverter clause. “It must be used for a fairgrounds,” said Commissioner Chair Lee Pinkoson. “If it doesn’t, then it goes to the state.”

The second plan would cost around $2 million and includes renovating the current buildings at the Fairgrounds at Waldo Rd. and NE 39th Ave.

The indoor gymnasium at the Fairgrounds is used regularly. This week it hosted an indoor roller derby match. The building, however, needs renovations.

Leaking ceilings, flickering lights and a lack of air-conditioning are some of the issues plaguing the facility.

“We do have blowers that we do blow,” said Jerome Lennon, a member of the Fairgrounds’ maintenance team. “There is ventilation. We have vents and when we open them up they have a venting fan and it sucks out a lot of the hot air that’s in the vents.”

John Pricher, executive director of Visit Gainesville, insisted that if nothing else, the facilities need an HVAC system. Without air-conditioning, the building is not rentable.

“As soon as I mention that,” Pricher said. “I’ve lost them.”

The project would add additional storage areas, a new air-conditioner and enhance the current acoustical system.

Several commissioners supported a more minimalist approach to the renovations that would render the facilities usable, but not require a full overhaul.

“That building’s built like a bomb shelter. It will be there forever,“ Commissioner Robert Hutchinson said.

Construction for the new fairgrounds at Weseman Tract would cost the county an estimated $14.3 million.

The Commission voted unanimously 4-0 to postpone making any long-term decision on the funds needed to move forward. The board requested more information from staff on financing plans, management models and event revenue estimates.

Commissioner Susan Baird said the question is what kind of economic value the Fairgrounds hold.

“Any analysis as to how many heads on beds is that going to bring? Because, we are using the hotel tourist tax, the hotel tax, to fund that,” Baird said, “under the assumption to generate more tourism and economic development in the county.”

The projects would be funded through a combination of revenue from the Tourist Development “heads on beds” Tax, the Economic Development Capital Fund and a bond issue.

Hutchinson argued that if the county were to spend such a large amount of money, a performing arts venue would be a better economic and tourist investment than new fairgrounds.

“We need basically the equivalent of the St. Augustine Amphitheater in Gainesville. That costs something, but you know what, that thing is a gold mine,” Hutchinson said.

Whitney is a reporter for WUFT News who may be contacted by calling 352-392-6397 or emailing news @wuft.org
Previous ‘Creepy, Nasty’ Videos, Spoof Facebook Page Lead to Investigation
Next Hawthorne Residents Voice Concerns With Development Plans