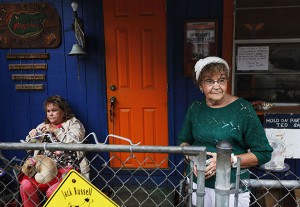 Sheila Bryant, left, and Billie Jean Curtis, right, stand on the grounds of Curtis Recycling in Hampton in November.

The Florida Department of Law Enforcement’s Jacksonville office is conducting a criminal investigation on the city of Hampton.

The investigation, confirmed Tuesday by State Attorney criminal investigator Darry Lloyd, comes more than two months after the Florida Auditor General’s office released an audit that found over 30 violations at the federal, state and city level.

The findings include money that was either uncollected or used on questionable expenditures.

State lawmakers Senator Rob Bradley and Rep. Charles Van Zant voted at a delegation meeting in March not to pursue legislation to dissolve the city of Hampton. FDLE declined to comment on the investigation.

Zak is a reporter for WUFT News who may be contacted by calling 352-392-6397 or emailing news @wuft.org
Previous Ocala Scientist Tests How People Trust Technology
Next VIDEO: Unmanned Aerial Vehicles