Clay County School District is taking huge steps with small screens, one classroom at a time.

According to the U.S. Department of Education, a school is classified as Title 1 when a substantial percentage of its students come from low-income families. Clay County defines that threshold as 60 percent or more of the students in each school. 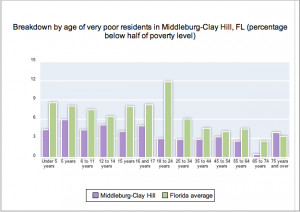 Clay County has eight Title 1 schools in the district. A school is classified as Title I when there is a high percentage of students in low-income families. Photo courtesy of city-data.com.

Diane Kornegay, assistant superintendent for instruction of Clay County Schools, said they received about $400,000 through federal funding. This has provided each of the eight schools with about 90 iPads.

Because of a district-wide decline in writing scores last year, Clay County set out to combat this through the use of engaging technology.

“This technology allows for more individualized instruction because students can access e-books specific to their reading level and area of interest,” Kornegay said. 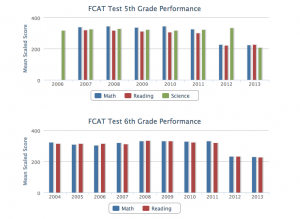 Clay Hill Elementary School is among one of the eight Title 1 Clay County schools that have implemented the use of iPads in the classroom. This initiative is in response to low test scores in recent years. Photo courtesy of USA.com.

Gavin Rollins, Clay County School District spokesperson, said the district had previously tried to implement this strategy in the classroom by using netbooks and Kindles. The smaller scale efforts were limited in their ability to reach all eight schools effectively.

Tracey Kendrick, Clay Hill Elementary’s principal, said the average number of days students were out of school on suspension last year was six. After receiving their iPads in October, the number has decreased to four.

Sixth grade students received their iPads in January. Comparing attendance records from January to April of the 2012-2013 and 2013-2014 school years, the average number of daily absences has dropped from approximately four to about two, Kendrick said.

Kendrick also said there were 22 sixth grade discipline referrals from August to January. After receiving the new technology, the number dropped. Currently there are no referrals.

Discipline gets to be more serious starting in sixth grade, she said, as students at that age are starting to mature.

If a student comes to Kornegay’s office for disciplinary reasons, their iPad can be confiscated.

“The iPad is a privilege, not a right,” she said. “I have seen huge, huge improvements.”

When sixth grade students received their iPads, one student with frequent disciplinary problems was told he would still have to use traditional pencil and paper.

After showing behavioral improvements, he was allowed to participate with his classmates. Since the change, he has not been back in Kendrick’s office.

Clay County is working to allow students to take the iPads home instead of leaving them with teachers at the end of the school day, Kornegay said.

Rollins and educators in the district are awaiting scores of April’s FCAT testing, as they will be a true indicator of the initiative’s success.

“We have to meet them where they’re at and engage them in ways that are exciting and relevant,” Rollins said.

Kendrick said students are using a variety of productivity apps, including Evernote, iMovie and Educreations, which is an interactive whiteboard that allows teachers to record lessons so students can replay them.

Educators in Clay County are trying to keep up with education and students as they change and grow, he said.

“It’s not just a toy or a gadget,” he said, “It really kind of lights up a student’s world and really just brings them alive and engages them.”

Taylor is a reporter for WUFT News who may be contacted by calling 352-392-6397 or emailing news @wuft.org
Previous State Targets Growing Feral Swine Problem
Next Apr. 24, 2014: Afternoon News in 90

After the COVID-19 pandemic forced schools to shut down nationwide, Bradenton attorney Carl Reynolds decided to donate Google Chromebook computers to any student in need.