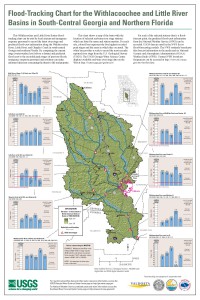 A flood-tracking chart released this month may help with predicting flooding in Madison and Suwannee counties.

The U.S. Geological Survey’s chart of south-central Georgia and northern Florida gauges how current flood forecasts compare to the past, said Megan Wetherington, a hydrologist at the Suwannee River Water Management District.

“It gives folks an idea of the severity of the flood developing farther upstream,” Wetherington said.

Ruthie Uriarte, manager of Madison County’s Yogi Bear’s Jellystone Park Camp-Resort, said she lost customers during last year’s flood. She said the chart would be helpful and is something to look into for her business.

“Our water levels rose dramatically and shut down some ATV trails,” Uriarte said. “It took a long time for it all to soak up. If people were coming here to do ATVing, it put a damper on things, and they decided not to come or change their dates.”

Weather is not something her park can do much about, but campsites prone to flooding may be relocated, Uriarte said.

When a big flood is expected, the Suwannee River Water Management District produces a table to compare the current flood reading to the forecasts of past floods in the area, Wetherington said.

“It’s nice that people have as many tools as they can because if you’re living upstream, you don’t get a lot of advance warning,” she said.

The flood chart should save people money because they will have the chance to move their belongings before any damage is done, Wetherington said

“If they see it’s a bad one coming from Georgia,” she said, “It will give them a little more time to make some decisions.”

The Withlacoochee flood in 2009 was declared a state of emergency and displaced 78 Madison residents, said Tom Cisco, Madison County director of emergency management.  The second-worst flood on the river, recorded in 2013, did not affect as many homes.

“The sooner you can get the word out, the better,” Bass said. “It does periodically flood. (In 2009), it had been raining in Georgia for a period of time, and then as the water level kept rising there, it flowed south.”

While people near the Withlacoochee River will take interest in this resource, Wetherington said she thinks residents farther downstream on the Suwannee River will also take advantage of the chance to see what floods are coming.

Donna Hardin, Branford town clerk, said the town has been lucky because no major flood damage has occurred since 1948.

“I’m sure the citizens would be more than happy to get any information when flooding is going to occur,” Hardin said.

Haley is a reporter who can be contacted by calling 352-392-6397 or emailing news@wuft.org.
Previous Local Videographer Presents Paranormal Experiences
Next Feb. 27, 2014: Morning News in 90