Ocala — Archaeologists and artists gathered at Silver River State Park over the weekend to demonstrate their prehistoric flint-knapping skills and showcase their artwork at the fourth annual Silver River Knap-In.

Knapping is the art of cracking stone in a controlled fashion, Whitfield said. Flint, chert and obsidian are commonly used.

Whitfield said he first flakes away at the edges of a stone with a bopper — a durable and cylindrical copper tool with a lead tip — to create an initial shape. Details are added during a process called pressure flaking, he said.

“It is all about setting up platforms to make it break where you want,” Whitfield said. “There is a little bit of method to the madness.” 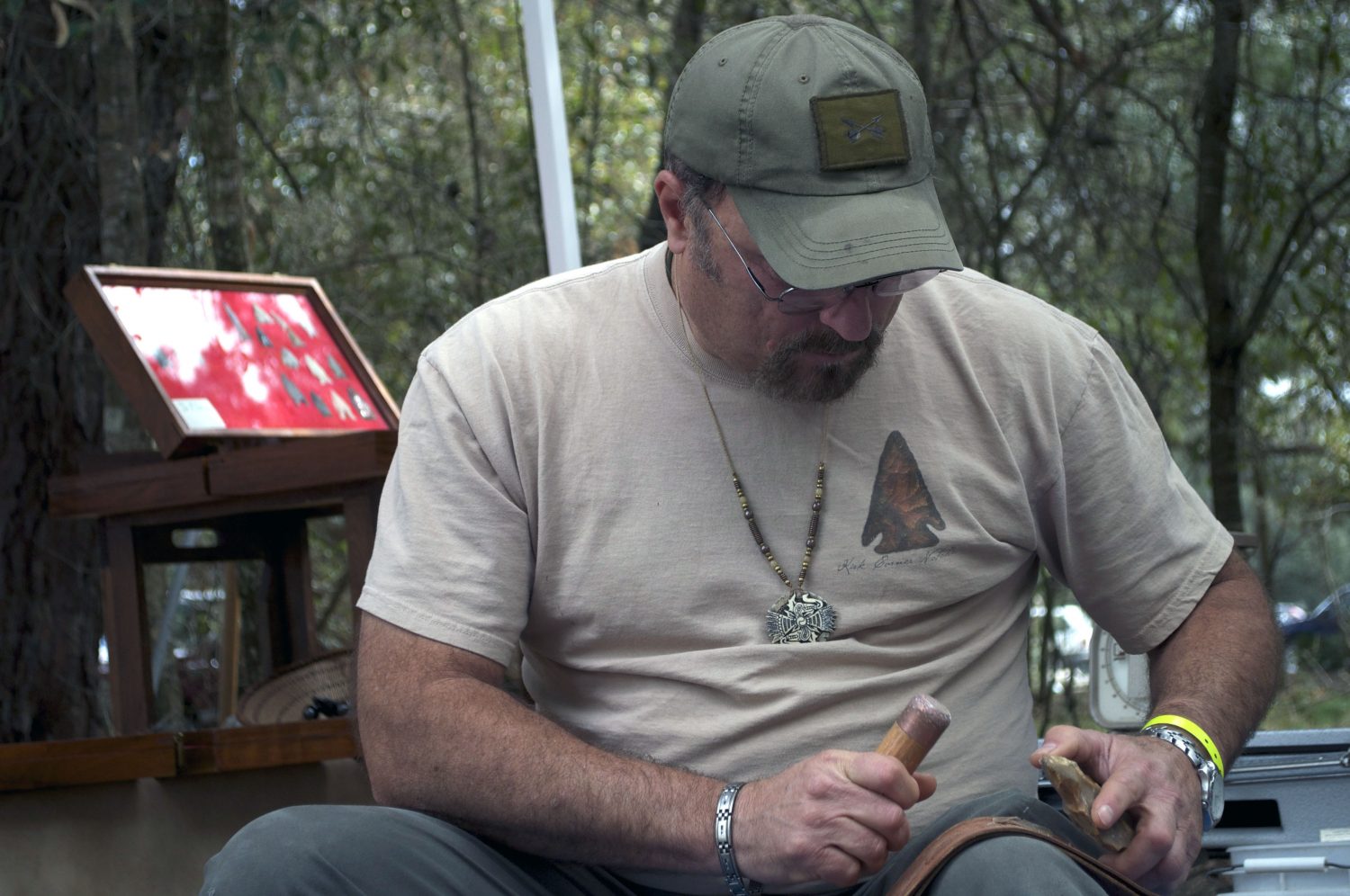 Jeff Whitfield, a resident of Alabama, blocks out the general shape of an arrowhead at the fourth annual Silver River Knap-In in Ocala, Fla. on Saturday. “It’s all about setting up platforms to make it break where you want,” Whitfield said. 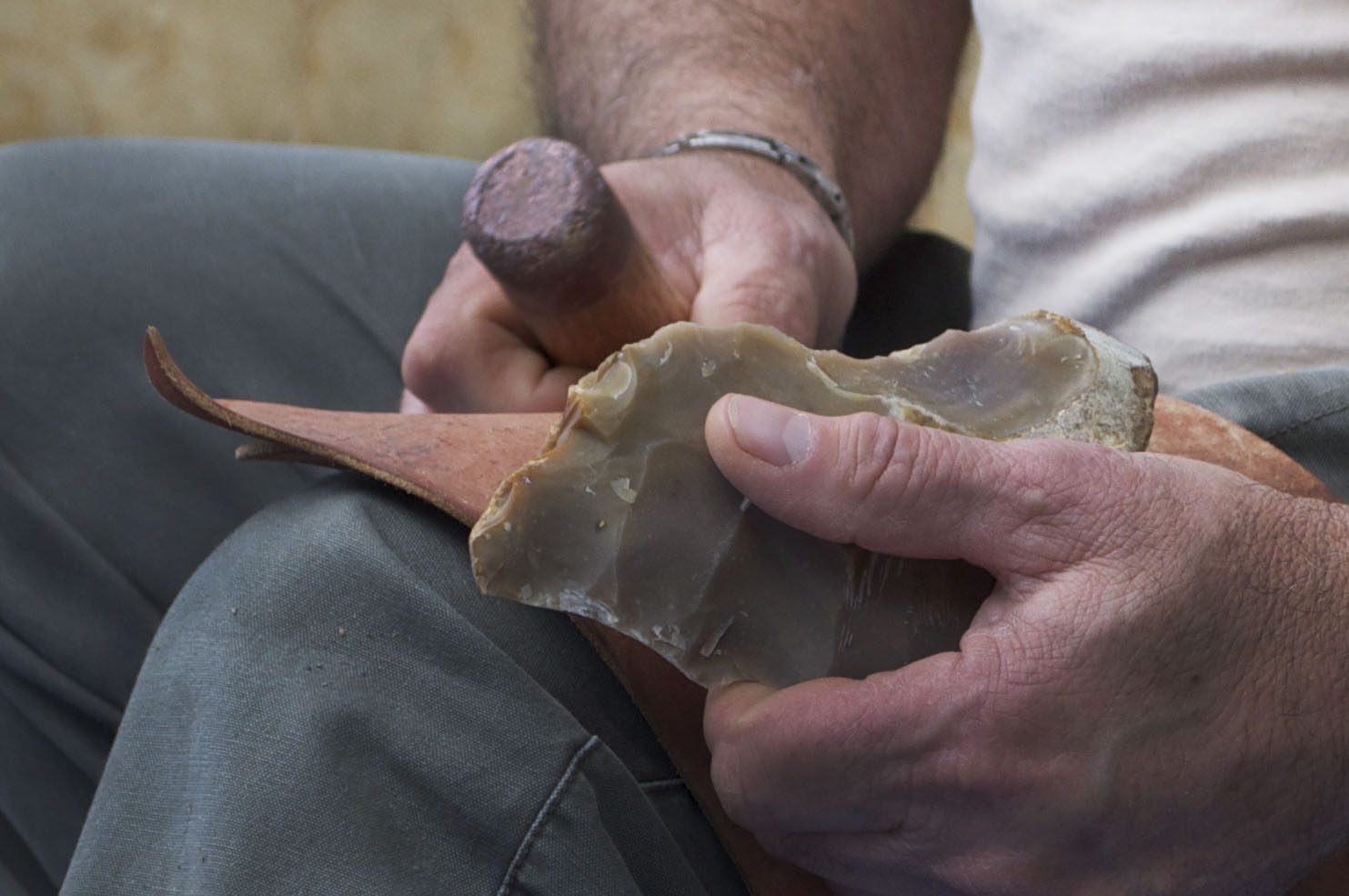 Whitfield, who began flint knapping in the early ‘80s, uses a tool known as a bopper, which has a copper body and a lead tip, to flake away bits of a Pedernales stone. Once finished, the arrow head will be roughly half of its total size. 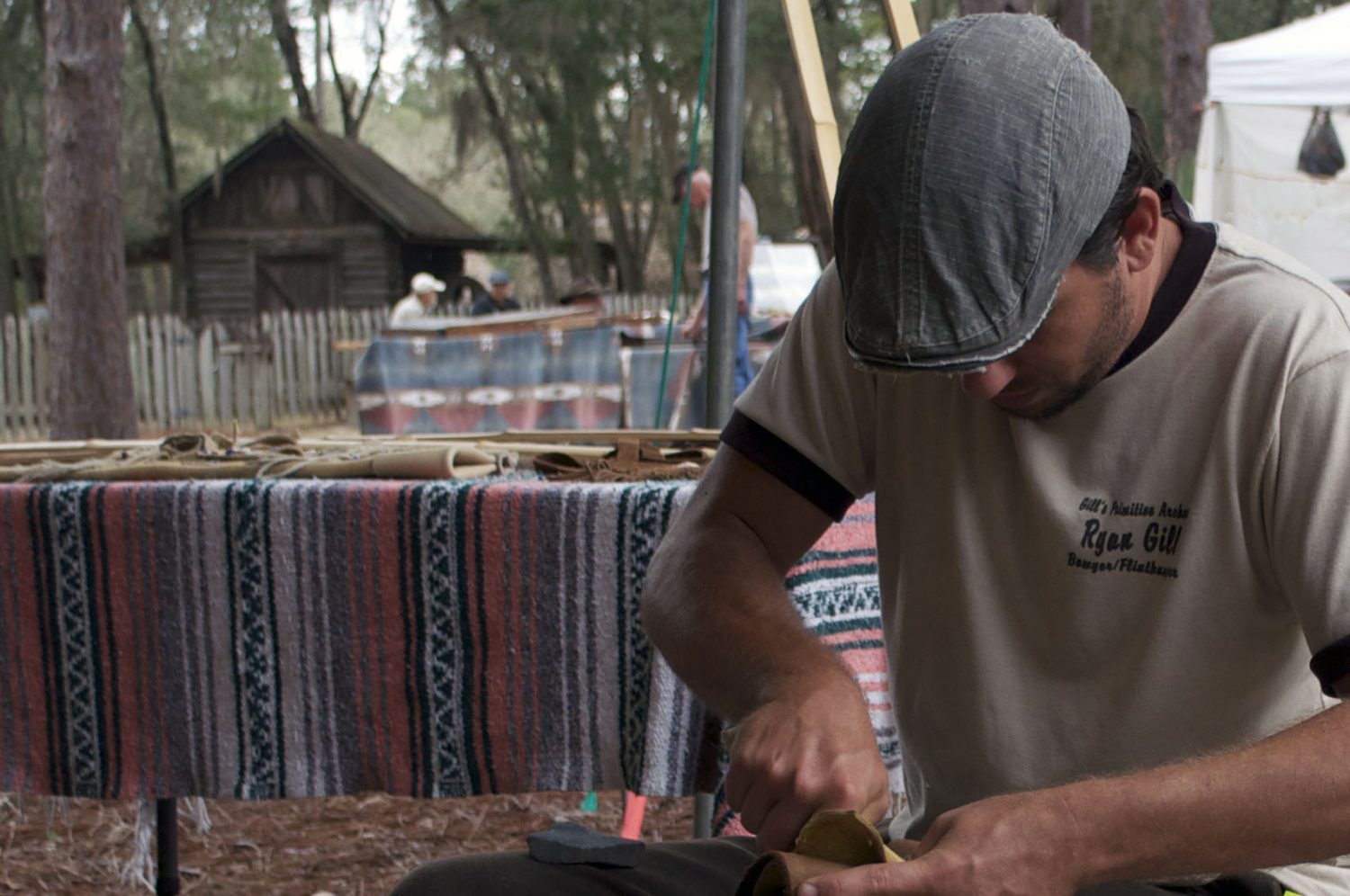 Ryan Gill, a resident of Hill Springs, Fla., demonstrated making a stone hunting point at the annual Silver River Knap-In in Ocala on Saturday. The event, which was held all weekend, featured experts in prehistoric skills who displayed and sold their crafts. 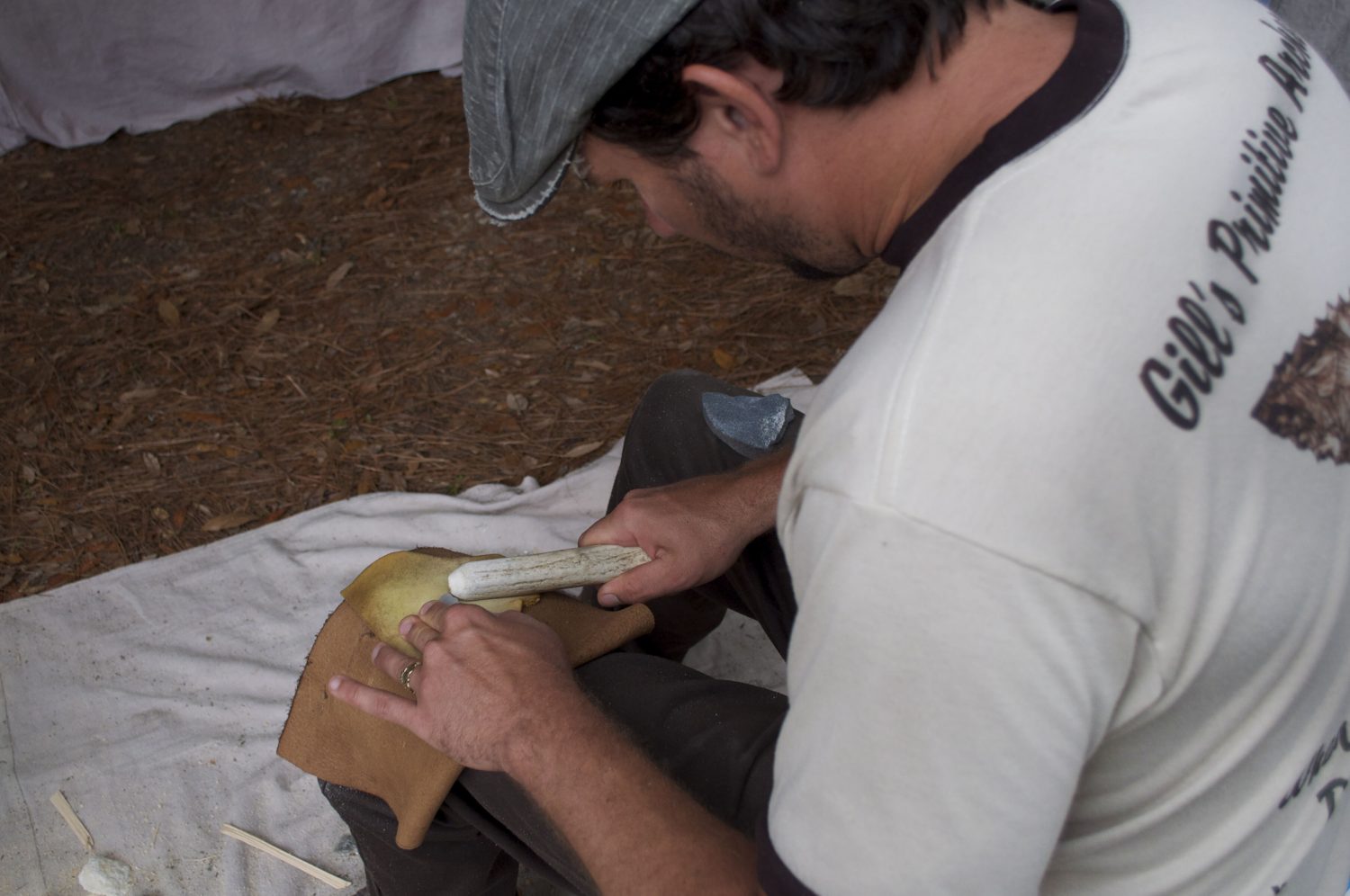 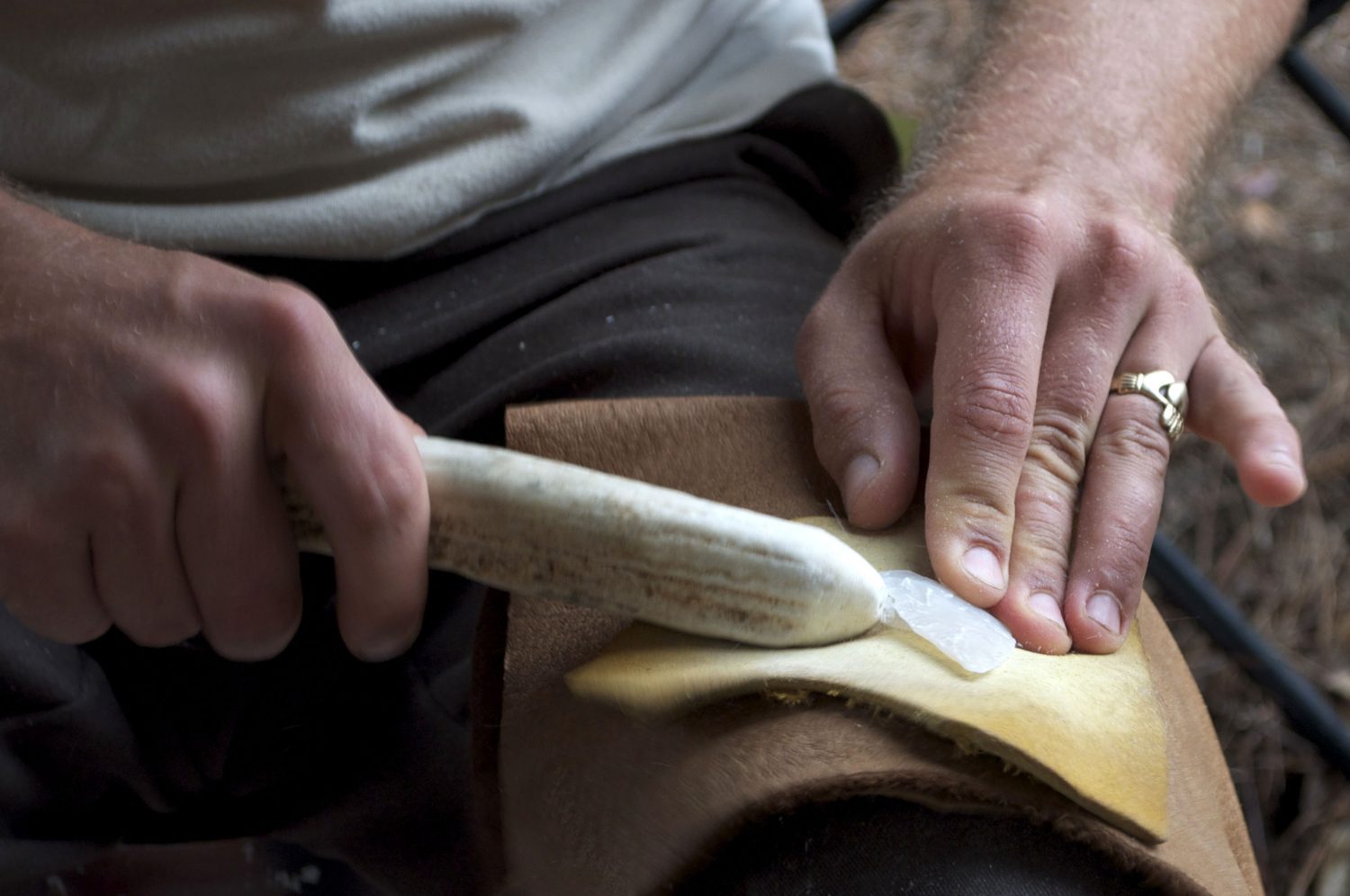 Gill protects his leg with scraps of leather while making a stone hunting point out of agatized coral. He specializes in aboriginal style flint knapping, and uses deer and elk antler tools to chip away the edges.