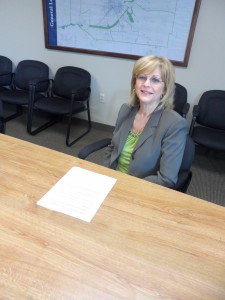 They can at the Citizens Academy, said 71-year-old Marion resident Jim Brockman.

The Citizens Academy is a 10-week program that educates residents and offers a behind-the-scenes view into the inner workings of their local government. Brockman and his wife both completed the course and visited several government departments during their time, ranging from the public library to the local landfill.

“We really saw government come alive during those weeks,” said Brockman. “It was a commitment, but it was worth it.”

First implemented in 1999, the academy’s program lasted four years before it was shut down.* However, with support from the Marion board of county commissioners and county administrator, Lee Niblock, the program re-launched in March of 2010 as part of Niblock’s “Doing More With Less: It’s All About Change” plan.

The program strives to inform participants of the different challenges and issues facing Marion County and provides an inside look into the operations and services of the local departments and offices.

Marion County residents at least 18 years of age can apply to take the course, though  space is limited to 60 applicants per 10-week course.

To graduate, residents must attend eight of the 10 sessions that take place on Thursday mornings from 9 a.m. to noon. A night session will also be available from 6 p.m. to 9 p.m. starting on March 6.

Each session is located at a different government department, where experts provide demonstrations of public works, such as filling a pothole to keep participants engaged. Mounir Bouyounes, assistant county administrator and county engineer, believes it is beneficial for residents to know what services are provided by the local government.

“A lot of the time people see things out in the field, and they don’t know who to call or who to get with,” Bouyounes said.

Brockman said he enjoys the things that most citizens would find rather mundane.

“One of my favorite parts of the program was when we went to the landfill,” Brockman said. “It was really interesting to see how they take care of the garbage and to see how they produce the methane gas off of that.”

*Correction appended: A previous version of this story said the academy’s program was shut down due to a lack of funding. It’s not known why the academy was discontinued initially, Marion County Commissioners program director Barbra Hernandez wrote in an email.

Katie is a reporter who can be contacted by calling 352-392-6397 or emailing news@wuft.org.
Previous Jan. 13, 2013: Afternoon News In 90
Next After Two Years Without, Yankeetown May Be Closer to Finding a Mayor

In this episode of The Lede, we take a look at a local vigil held …