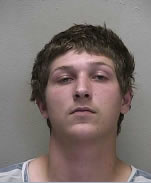 Marion County authorities said they believe Martin is responsible for setting fire to the cars on four different occasions in September and October.

According to the Sheriff’s release, an officer on stakeout observed a white man pouring something under the hood on the driver’s side of a patrol car. The officer gave chase, but lost the man. The liquid was reported by the sheriff’s office as a “flammable accelerant.”

According to the Marion County release:

Several calls were received with information that indicated Dylan Martin was responsible for these arson cases. They gave details that Martin had shared with them about how he set the fires and ran from law enforcement officials. On November 5, 2013, Dylan Martin was interviewed by detectives and denied his involvement in these cases stating that he was with his girlfriend across town. He also refused to take a polygraph test.”

Marion County Jail records show Martin has been arrested a number of times in the last three months on possession, grand theft and burglary charges. He was also booked in February in the Marion County jail and released on April 5, 2013. Public records also show possession charges filed in Maryland in 2010, and he plead guilty to theft charges in Maryland’s Howard County District Court in 2011.

Perri is a reporter for WUFT News who may be contacted by calling 352-392-6397 or emailing news @wuft.org
Previous North Florida severe flu cases on the rise
Next Cave divers defend sport after deaths at Eagle’s Nest Sink

It remains unclear who gave the order to only allow defendants and litigators into the courtrooms, though a sign posted on the door of each one declared it was “for public safety reasons.”