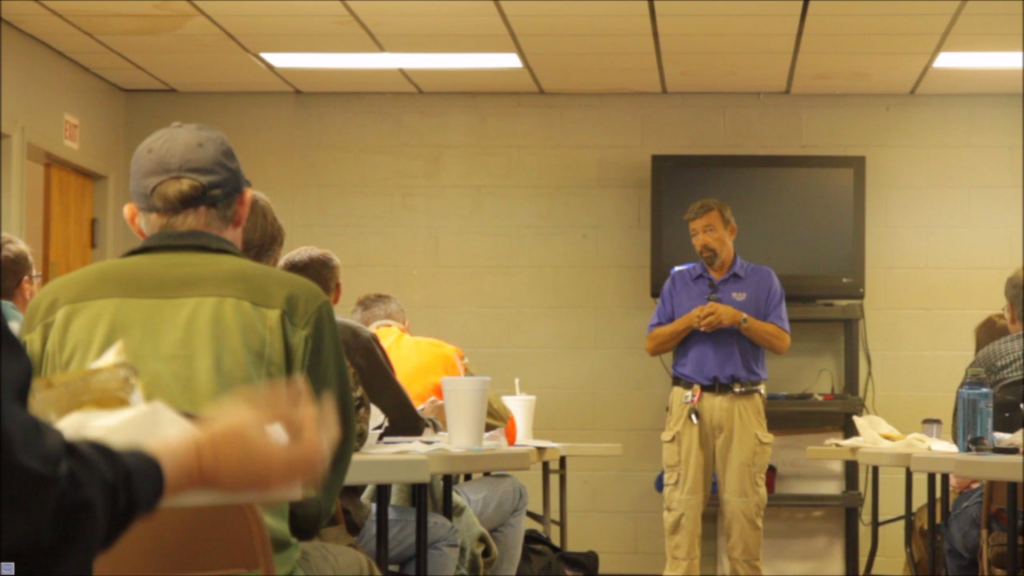 A room of disciples sat in silence in the fellowship hall of First Covenant Presbyterian Church in Live Oak on a cold October morning this year.

The sermon was about fear.

“Fear is to the mind what pain is to the body,” the preacher said as he walked down the aisle of students in a black leather jacket, a gun holster on his hip.

Massad Ayoob, or Uncle Mas, as his pupils call him, is an  NRA lifetime member, firearms instructor, part-time police officer, and self-defense expert. He started the second day of a 40-hour lesson on self-defense with a speech that waxed philosophical. His baritone voice, roughened by smoking packs of Marlboro daily was that of a wise elder.

He told the students only reasonable fear was justifiable. The 37 students took notes diligently. They would learn about Stand Your Ground, the Castle Doctrine and other aspects of self-defense law from Ayoob.

The blinds of the choir room were closed, but the sun shone in – good news for the rest of the day. After the legal lesson, he would take his students out to a gun range to put theory to practice. 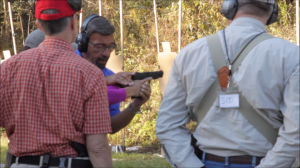 Herman Gunter is a white-haired church elder at First Covenant Presbyterian Church. He is a Live Oak resident and owner of a private gun range, which he offers for the course.

Gunter said he offers all the participants a 100 dollar subsidy because it’s lifechanging.

Gunter first took the class in 1983 and  since then, Gunter’s seven children and wife have taken the class too.

Gunter’s range at the bottom of an abandoned limestone quarry swallows the bullets and the explosions that sound like firecrackers. It’s an ideal location to shoot 500 rounds over four days of the course.

The small town with a population just under 7,000 is three hours north of Sanford, the suburban town at the center of a national controversy over the death of 17-year old Trayvon Martin.

Although the Zimmerman legal team never cited Stand Your Ground as part of the defense for the Trayvon Martin case, the addition to the Florida self-defense law raised questions about using lethal force.

Even before Stand Your Ground became a controversial topic, Ayoob incorporated this blueprint for articulating danger in court to prevent unjust incrimination in self-defense cases.

When describing the class, he is cautious.

He says if anyone tells you it’s a way to get away with murder, it’s not true. He calls it empowering, the same as teaching someone first aid.

Ayoob calls a gun a “mechanical force multiplier” and is keen on referring to the layers of safety protocol that he teaches before going to the gun range. Anyone taking the course has to provide proof of a clean criminal background.

The participants of MAG40 all had one thing in common: a sense that they needed to be more prepared. Jodi Batten, 41, picked up a gun when she got divorced after a 22-year marriage. Now, as a NRA certified pistol instructor, she volunteers at the firing line.

She says that anyone who carries a gun should taken the class. It’s about confidence and competence,” Batten said.

Scott Oglesby, 46, is a licensed federal firearms dealer. He taught his two daughters and son how to shoot a handgun when they turned 12.

He steps up to the firing line and shoots eight rounds with his left hand, the less dominant one. The bronze cartridges fly in all directions. Oglesby backs away from the firing line, taking off the protective goggles and earplugs.

“It’s about personal protection, not John Wayne or cowboys,” he explained. He said that he was always familiar with shooting because of his rural upbringing , but it wasn’t until his best friend was killed seven years ago that he started to learn more about criminal law.

Sid Burns, another student, is a retired police officer. He said that in rural areas, there’s no way to protect the entire population. With a growing population spread out over more territory and sparse local budgets, police can’t compete with crime. Owning a gun is like having a fire extinguisher in your house, he explained.

Ethan is a journalist at WUFT News. He's a Pennsylvania native who found a home reporting Florida's stories. Reach him by emailing emagoc@wuft.org or calling 352-294-1525.
Previous Honey From The Heart: Beekeepers Strive to Keep Honey “Real”
Next Gun Permit Ownership Shows No Correlation With Stand Your Ground Cases