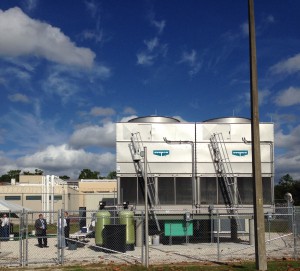 The Alachua County Jail held a ribbon-cutting ceremony to celebrate the completion of an equipment replacement and energy conservation project.

Over the course of 10 years, the jail, located at 3333 NE 39th Ave., completed 45 renovations and finally revealed the final project on Monday.

“I think that this no doubt will be the state-of-art workmanship for jails across the country,” Jackson said.

The renovations were necessary when systems stopped working and became costly. One in particular was the air conditioning.

Alachua County Sheriff Sadie Darnell said the project for replacing the air conditioning system in the jail was imperative because it was failing. In  fact, she said all 76 individual air conditioning units on top of the jail were faulty.

“At the jail, we are different than a homeowner,” she said. “We are not able to order up the doors and windows in order to get cooling, so it’s key to have proper air control and conditioning, especially during the July and August months.”

Melissa is a reporter who can be contacted by calling 352-392-6397 or emailing news@wuft.org.
Previous Health Officials: It’s Not Too Late To Get Your Flu Shot
Next City and County Commission Discuss Future of Fire Station and GRU