‘Pag-asa’ For A Better Future In The Philippines 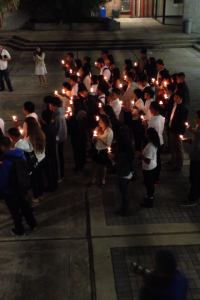 About one month ago, millions of lives were changed forever when the Philippines was struck by one of the strongest typhoons to ever hit land — Typhoon Haiyan.

The typhoon was as powerful as a category five hurricane. About 4,000 lives were taken and more than two million families were left without basic necessities such as food, water and shelter.

To remember victims, the Filipino Student Association at the University of Florida held a candlelight vigil Monday night. Students gathered at the Architecture Building Atrium at UF in commemoration of the families and friends affected by the typhoon, as well as the rest of the Filipino community.

The president of FSA, Andrea Espulgar, was one of the attendees who said she had a lot to be grateful for.

“We weren’t able to contact (my family) for a few days which worried us a lot,” Espulgar said. “Eventually, we got in contact with them and they are all alive. They are doing OK. They are scattered everywhere trying to find a safe place just like everyone there.”

Alexander Cena, director of  Asian Pacific Islander American Affairs at UF, spoke at the vigil about his personal connection to this devastating natural disaster.

“It’s my mom’s place where she is from,” Cena said. “It’s still scary to think that you have family that you’ve met or haven’t met that were put in harms way.”

The candle lighting ceremony was followed by a prayer and a moment of silence to remember all those affected by the typhoon. The night concluded with a musical performance by Sidesweep, a band made up of two FSA members.

The candlelight vigil was not only to remember those affected by the typhoon, but also to bring hope.

“Habang may buhay, may pag-asa” which translates to “as long as there is life, there is hope,” reminded people to remember this time and to hope for the rebuilding of the country.

FSA Advisor, Abby Estilong, wanted the world to remember this disaster. Her “pag-asa” was that the community will continue to help the Philippines until it is rebuilt and stable once again.

“We cannot stop after the initial give,” Estilong said. “We have to continue to remember. My hope is that we continue for the years until Tacloban is rebuilt”

FSA has a goal to raise $2,500 by the end of the semester to send to the victims of Typhoon Haiyan. One hundred percent of the money raised will be contributed to the Gawad Kalinga Program, where it will be used to distribute packages, rebuild homes and help the victims.

Katherine is a reporter who can be contacted by calling 352-392-6397 or emailing news@wuft.org.
Previous Why Florida’s Meteorologists Remain Worried About 2013’s Weak Hurricane Season
Next Interactive: How Do Legislators Feel About Changes To Florida’s ‘Stand Your Ground’ Law?