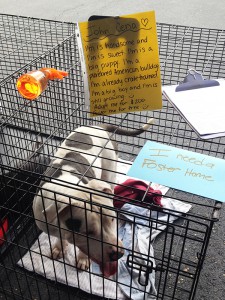 The volunteer-based operation is building a new rescue ranch for dogs after raising $20,000 for a down payment on the Levy County Property.

Phoenix Animal Rescue volunteer and board member Cathy Coe said dogs can now have a cabin-style living arrangement, as opposed to kennels.

Ten years ago, fellow board member and now the director, Michelle Dunlap, was a dog trainer hired to rehabilitate a dog named Phoenix, who had been stolen and later found by its owner. This rehabilitative process led Dunlap to develop Phoenix Animal Rescue.

Coe said the network is made up of 92 dogs and about 70 foster homes.

The organization will remain foster home-based until the ranch is completed. Upon its completion, the ranch will serve as an alternative home for dogs who are not currently being fostered, Coe said.

Every weekend, the rescue brings dogs to the PetSmart on Archer Road, where the dogs are available for adoption and fostering.

Jonathan Weinberger, 20, said he couldn’t resist adopting his new dog, Lula, while at the event Saturday. He said he has never purchased a dog from a breeder.

Ten years after having rescued his first dog, Truffles, at a pound, Weinberger said he walked into the PetSmart event and saw all the dogs in a similar setting to when he first adopted.

While other dogs were yapping and interacting with potential buyers, one dog looked lonely and miserable, Weinberger said. That was the dog for him.

Weinberger said adopting animals is more fulfilling for the owners and the dog than buying from a breeder because it serves a greater good.

“If you buy from a breeder, those dogs are being supplied for,” he said. “They’re with that breeder. Regardless, those puppies will be okay. These are dogs that have nowhere to go and half of them will be put down if no one takes them. ”

Coe said the new ranch will provide Phoenix Animal Rescue with a central place where people can see dogs, in addition to PetSmart adoption events.

“At the ranch we’ll be able to get to know the dogs a little bit better and help place them in foster homes a bit more appropriate, as opposed to just kind of matching,” Coe said. “We’ll have a better system in place.”

Since January, Phoenix Animal Rescue has helped save 317 dogs, with the majority of the dogs coming from Levy County animal shelters.

The Phoenix Animal Rescue hopes to have the ranch up and running by the end of next year and available to the public at the same time, she said. Construction will most likely last through spring.

Amber is a reporter for WUFT News and can be contacted by calling 352-392-6397 or emailing news@wuft.org.
Previous Nov. 19, 2013: Afternoon News in 90
Next Tools Stolen From Alachua Habitat For Humanity