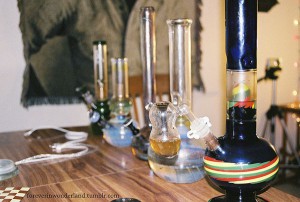 Owners of four smoke shops in Gainesville — Mystic, Modern Age, High Tides and Gator City Tobacco and Gifts — have all refused to comment on the recent drug paraphernalia ban passed by the Florida Legislature.

Local smoke shops wouldn’t comment because “they probably feel like they are being persecuted,” said Gainesville lawyer Joshua Silverman.

“Discretion is a point of value in that profession,” he said.

A person knowingly and willfully selling or offering for sale any of the drug paraphernalia listed in the bill is charged with a first-degree misdemeanor. A second or subsequent violation is a third-degree felony, according to myfloridahouse.gov.

“The outcome depends a large part on the criminal history,” said Silverman.

A third-degree felony can result in up to five years in a state prison, and/or a fine of up to $5,000, he said. Depending on criminal history and severity of the crime, offenders could lose their right to vote.

Proposed by Rep. Darryl Rouson, D-St. Petersburg, the bill has its roots in his anti-drug campaign fueled by overcoming his 19-year-long cocaine addiction that started while he was at UF Law, according to the Tampa Bay Times.

According to myfloridahouse.gov, “It is important to note the items included as drug paraphernalia … are not illegal to possess unless they are used, intended for use, or designed for use … for growing a controlled substance.” This allows smoke shops to remain in business.

According to Lt. Todd Kelly at the Alachua County Sheriff’s Office, the bill has not seemed to affect illegal drug use.

“We have not seen any significant changes in the number of arrests for possession of paraphernalia,” he wrote in an email.

“Ultimately, it did nothing to the image of marijuana and was not effective in regulating smoking paraphernalia whatsoever,” he said. “I think the proposed bong ban was a misguided attempt to put a bad face on marijuana by making it more difficult to get smoking devices.”

“We have the most powerful attorney in the state … publicly supporting medical marijuana now,” Andrews said. “If we can’t trust a top…lawyer in this country, who can we trust?”