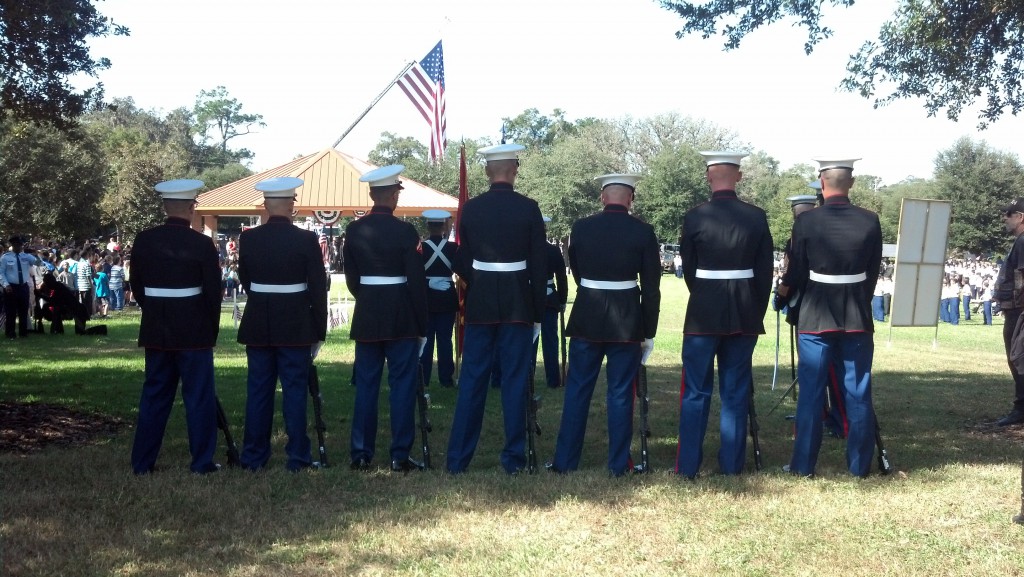 The event was the seventh annual of its kind held in Ocala. Students at public schools in Marion County attend the ceremony on Veterans Day each year instead of taking the national holiday off from school.

Hundreds of veterans assembled for a day of patriotic songs, poems and performances by students, as well as multiple military salutes.

“It’s a day that we reflect on who we are as a nation and where we come from,” said retired U.S. Army Maj., chaplain Alan Heneisen. “It’s a time to see that some of our own families have been interspersed with military people in the past, and it’s a time for families to enjoy each other.”

In addition to the displays of gratitude toward those in attendance, the ceremony also included a moment of silence and a military gun salute by a U.S. Marines Honor Guard from Orlando in recognition for those who gave their lives in the line of duty.

Marion County families who lost loved ones in the armed forces presented a memorial wreath at the park’s monument.

Following the event, veterans, school children and their families gathered in different sections of the park to pay tribute at the memorials for fallen soldiers.

“Veterans Day and Memorial Day are more in recognition for the soldiers that didn’t get the opportunity to come home,” said retired U.S. Army Sgt. Ronald Osborn. “I don’t celebrate it as a holiday. It’s a day of remembrance.”

Children talked with veterans throughout the day and handed out handmade thank you cards to veterans following the ceremony.

“I would like for them all to have a chance to serve in the military,” said retired Navy Petty Officer 2nd Class William Love. “If they couldn’t do that, then maybe serve in some other capacity. It really helps you appreciate what we have here and the sacrifices that were made to keep the country free.”

Joel is a reporter who can be contacted by calling 352-392-6397 or emailing news@wuft.org.
Previous More Seniors Using The Internet, Gallup Poll Finds
Next Alachua County Schools Receive Competitive Counseling Grant