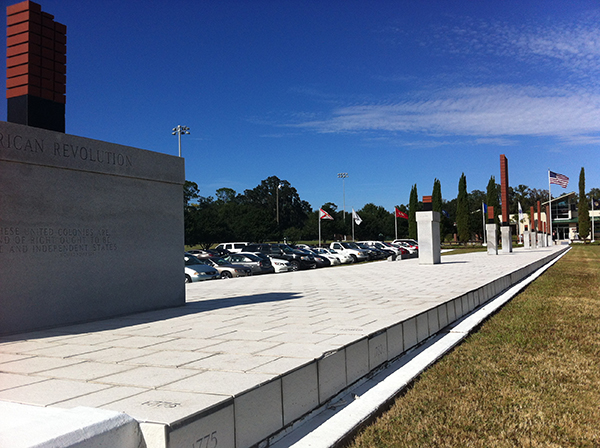 Each year Veterans and Alachua County residents gather at Kanapaha Park to honor those who have served or are serving in our country’s military.

This year will mark the 20th celebration at the Alachua County Veterans Memorial.

“Each year we identify a specific group, or event and honor them. This year we’re recognizing and honoring our Korean War veterans. ” said Victoria Van Buren, commander of the American Legion Haisley Lynch Post 16.

This year marks the 60th anniversary of the cease fire in Korea.

Dick Davis, 84-year-old commander of Gainesville’s Korean War Veterans Association, said it’s an honor to be recognized for his service.

“It’s really special when we get all our vets out there and are given the opportunity to publicly thank them. The thousands that show up show that we live in such a patriot community,” Lynch said.

Starting at 10:30 a.m. Monday the Lincoln Middle School band will begin with a musical tribute. Followed by parachutists from Sky Dive Palatka landing at the park carrying the American flag.

About 20 local Korean War veterans plan attend and be recognized for their contributions during the war including 81-year-old Medal of Honor recipient Cpl. Duane Dewey, a Michigan native who resides half the year in Hawthorne.  The Medal of Honor, the nation’s highest military decoration, is awarded for personal acts of valor that go above and beyond the call of duty.

Dewey was a leader of a machine gun squad with Company E, 5th Marines, 1st Marine Division. While serving near Panmunjom, Korea, on April 16, 1952, Dewey was receiving medical attention from a pervious fight alongside his assistant gunner when an enemy grenade landed nearby.

He shouted a warning to his fellow marines and flung himself on top of the grenade, personally absorbing the full-force of the explosion and saving his comrades from certain injury and death.  He was the first person to receive the Medal of Honor from President Eisenhower.

“Dewey is an example of a real American hero,” said Davis, “ Since the medal is most often awarded post-humorously this may be a once-in-a-lifetime opportunity to meet a living legend.”

The Green’s Gavel Club, a junior division of Toastmasters International, will read a patriot poem, followed by a flag folding ceremony by the Milton Lewis Young Marines.

New wreaths made by the American Legion  Haisley Lynch Post 16 will be placed at the base of all of the war monuments.

The Alachua County Veteran’s Memorial was dedicated on Veterans Day, November 11, 1993. The memorial was christened “A Walk Through Time”.

The 14-foot wide and 219-foot long walkway contains 10 granite bases, each representing America’s 10 major wars beginning with the Revolutionary War in 1775. Each foot along the base of the walkway represents one year, while each individual red brick on top of the bases represents 1,000 American lives lost.

The Civil War, the nation’s deadliest war, is represented by 529 bricks, while Operation Desert Storm is about half a brick.

There are plans to adjust the spacing of monuments to make room for Operation Enduring Freedom and Operation Iraqi Freedom, which would shorten the length of one year represented to eight inches.

The names and dates of each war are etched upon the monument. The ring of black marble around each monument represents the international sign of mourning. The names of those from Alachua County who lost their lives while in service are etched into the monuments upon the memorial.

More than 260 names of local veterans have been written into the granite. Large granite markers alongside the concourse reflect the names of over 500 University of Florida students who died while in service.

After the wreaths are in place, taps will be played by four buglers from the Buchholz High School band, followed by the benediction.

Ben is a reporter for WUFT News and can be contacted by calling 352-392-6397 or emailing news@wuft.org.
Previous UF Records War Stories, Especially From World War II Veterans
Next As More Come Home, Orange Lake Veterans Welcome Those From All Wars