UPDATE: Gainesville’s Thomas Center was deemed safe for employees to start working again starting Tuesday, after the fumigation and safety checks ended over the weekend and Monday.

The gas is deadly, so strict safety measures were taken to ensure no person was in the building when the fumigation started.

Co-owner of Emory Brantley and Sons Sean Sean Brantely explained how the process is actually quite safe.

“Anyone who would get under the tarp would immediately succumb to the effects and have to get out,” Brantely said of a warning gas that is used before and during the chemical treatment. 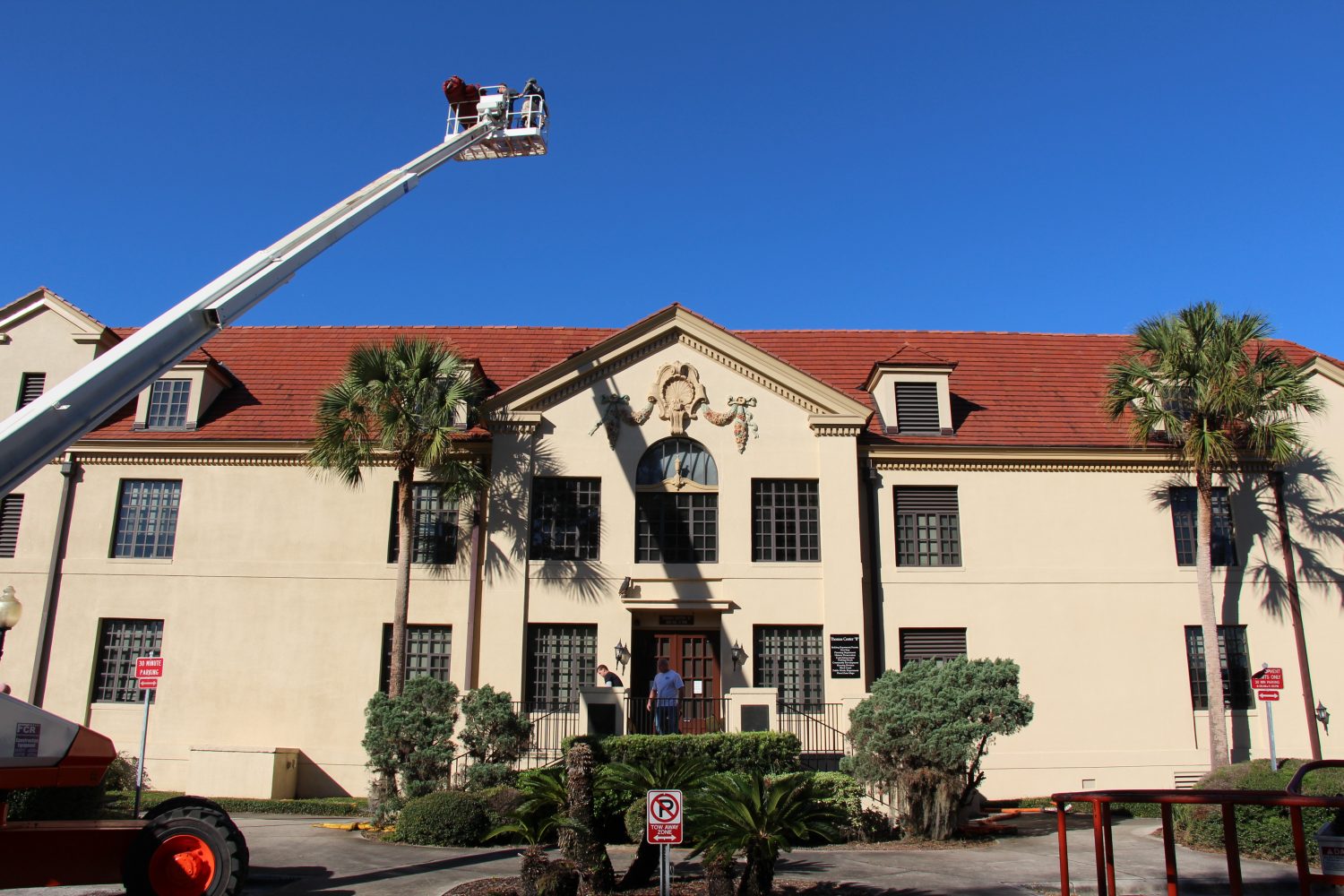 Tarps will cover the Thomas Center all weekend during the fumigation process.

The gases used for the fumigation leave no residue, so the buildings just have to be fanned out to be safe. To be sure that there is no risk, workers from the two companies will measure the air quality of all air spaces in the center before allowing employees or the public back in.

In addition to the warning gas, each entrance will be double-locked, said Dale Dubberly, an environmental administrator for Field Enforcement for Florida’s Department of Agriculture and Consumer Services.

The choice to fumigate the center over other options was ideal, Woods said.

“Once the treatment is completely done, it will be completely safe to be reoccupied for work purposes,” Woods said.

The process of covering the Thomas Center is lengthy and requires at least a few days to set up. Giant tarps covering more than 800 square feet each will be connected and draped over the sides of the buildings.

Following the application of the tarps, water and sand weights will be placed around the center’s perimeter to hold the fumes in during the fumigation.

The Thomas Center was listed on the National Registry of Historic Places in 1973.

The last time the city treated the center for termites was about 10 years ago. The city bought the Thomas Center in 1974 and has been responsible since for its upkeep. 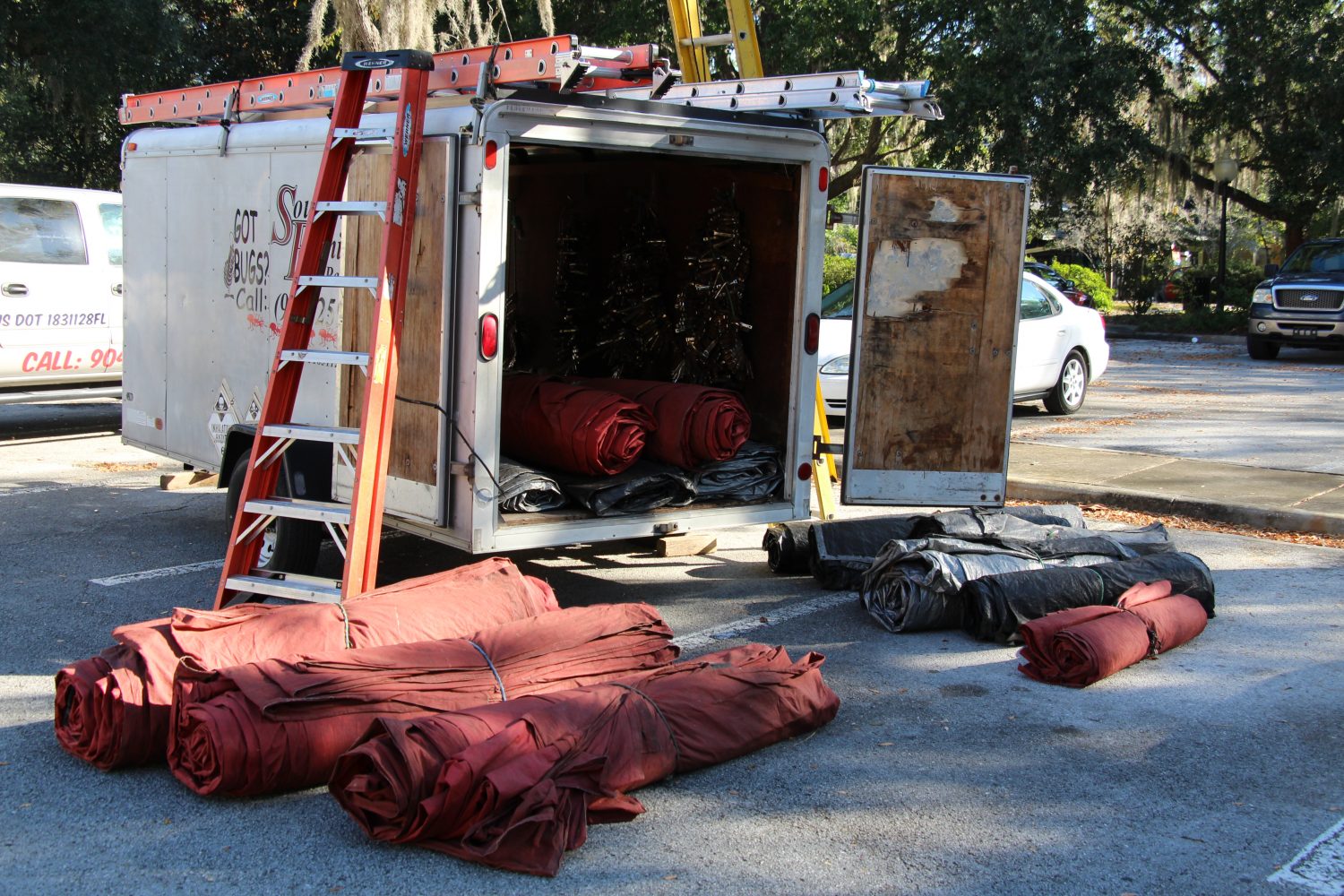 Two companies are working on the $103K fumigation project this weekend. Officials expect the center to reopen as early as next Tuesday. 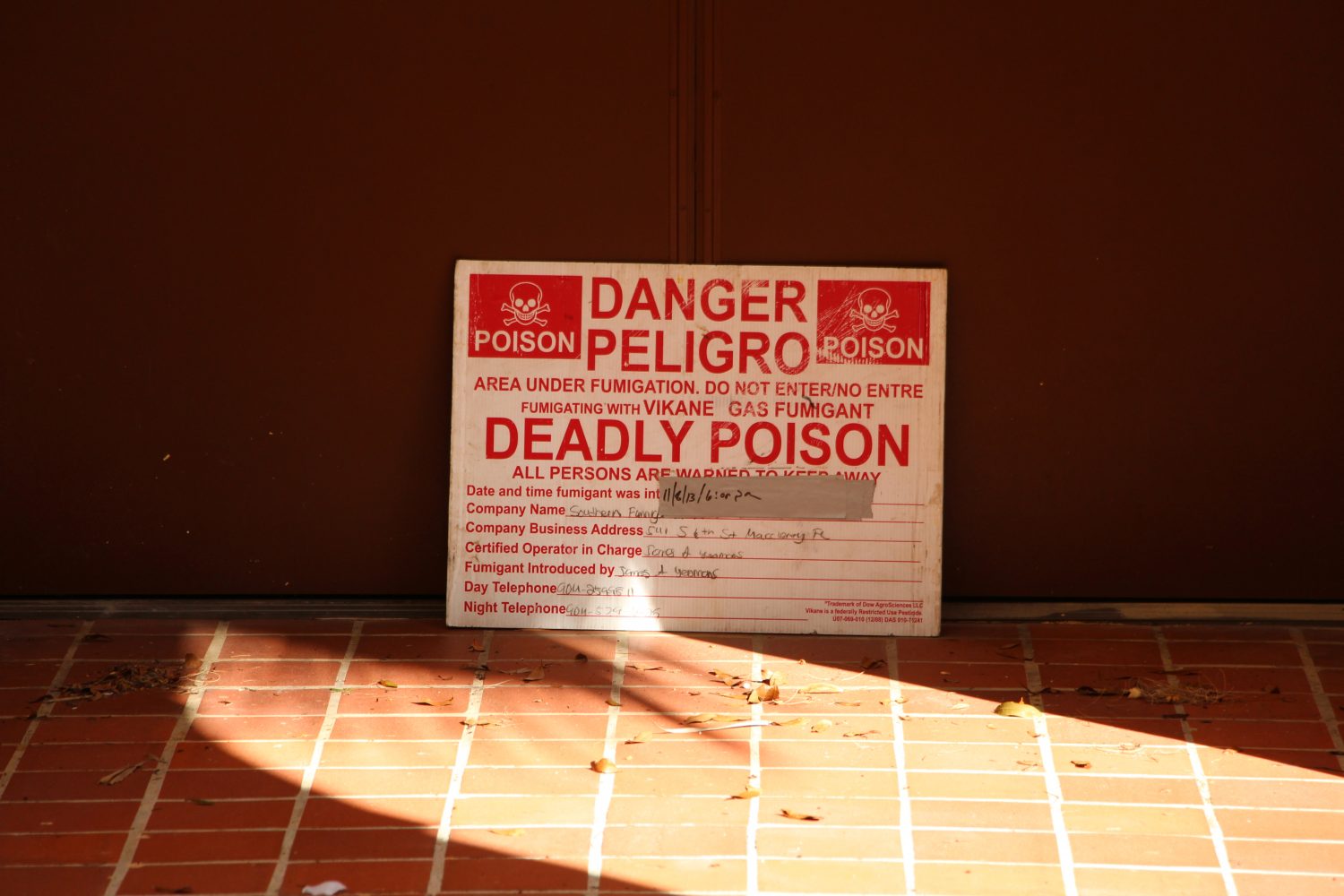 The contracted companies will fill the buildings with a fume much like tear gas in order to keep trespassers out, and will follow on with the chemical treatment. 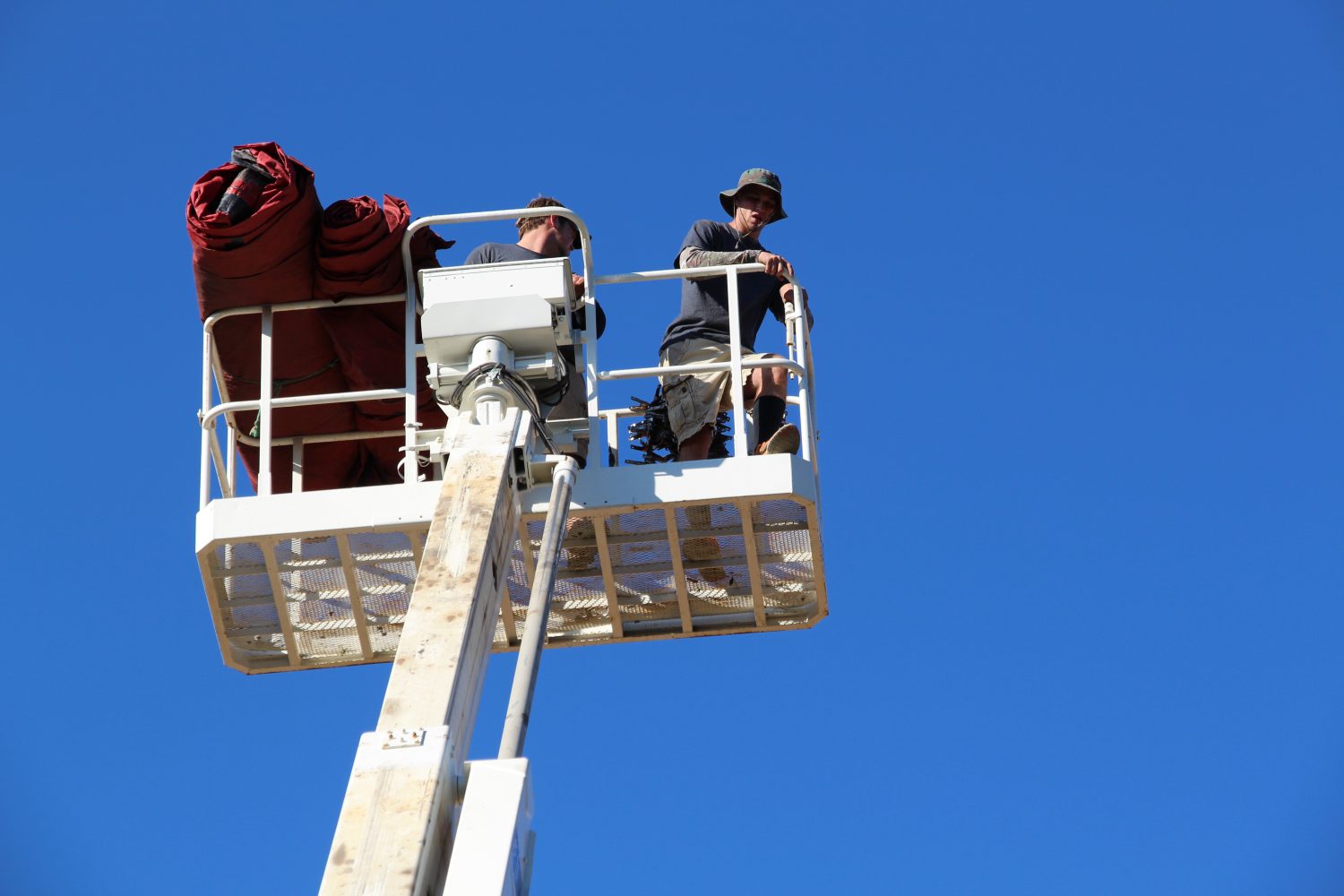 Workers take the tarps 50 feet high to place them on the rooftops of the Thomas Center. 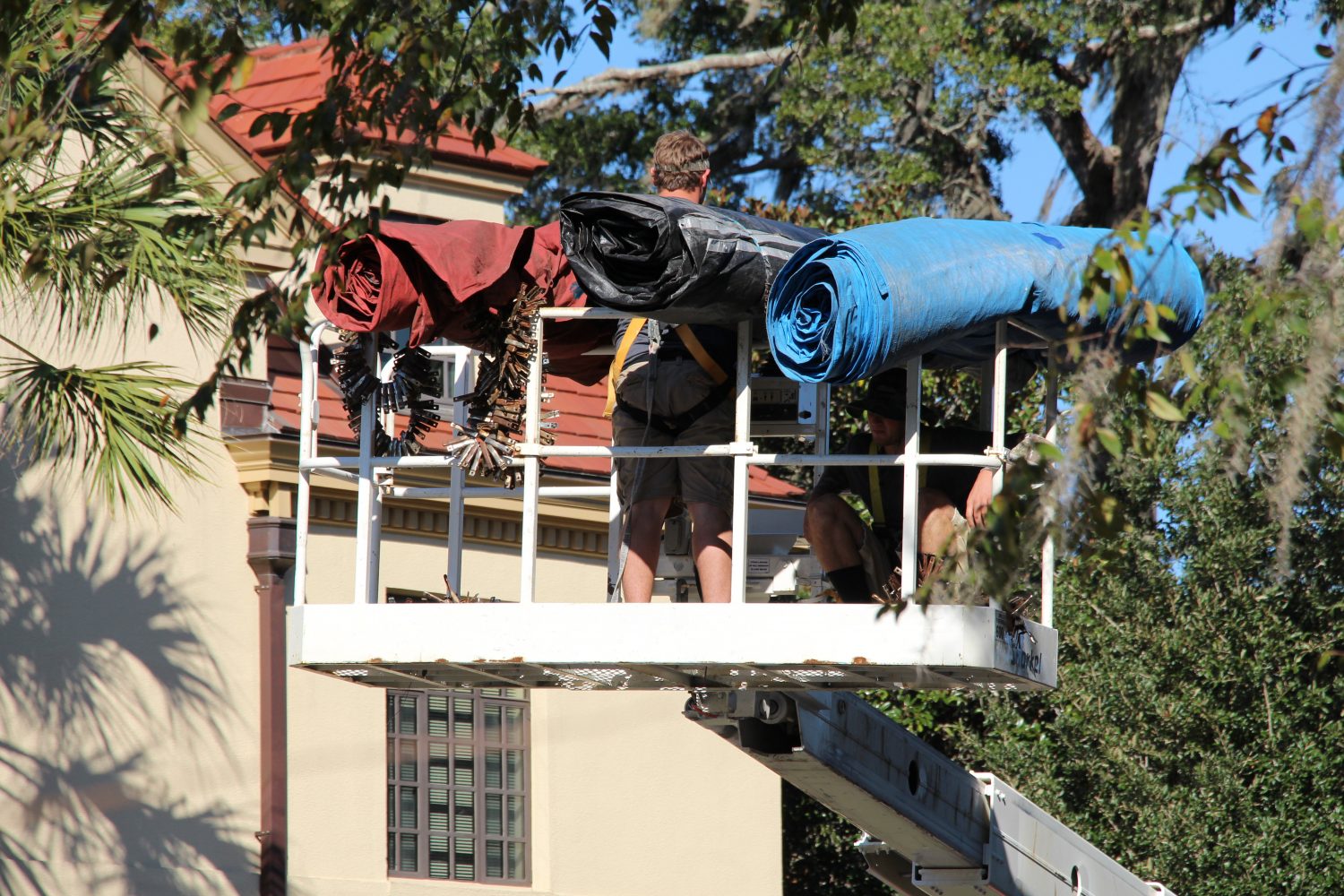 Red, black and blue will cover the Thomas Center.

Keran is a reporter who can be contacted by calling 352-392-6397 or emailing news@wuft.org.
Previous Someone Is Stealing Rent Checks From Gainesville Apartment Drop Boxes
Next Gainesville High School’s Marching Band Returns to Homecoming Parade