Tucked away in his bedroom, Scott Marshall takes a break from his busy schedule by playing a quick game of Nazi Zombies.

As trivial as this may seem, Marshall recalls a time in his life where his gaming hobby could have been his downfall.

“I used to play World of Warcraft… very extensively,” he said.

Marshall, who had previously subscribed to an online gaming community, admits to the excessive use and fascination that comes with using the Web — including playing online games uninterrupted for up to 12 hours at a time.

“But then you realize you spend a whole day sitting on the couch in front of a computer doing nothing,” he said. “And that didn’t really sit well with me.”

Professionals in the medical field believe Internet addiction should be taken more seriously now that the Web is increasingly integrated into our everyday lives.

Daniel Howes, an addiction therapist, said that Internet addiction is far more serious than some would choose to believe.

“Because it’s something to joke about, like, “Oh, I’m addicted to the Internet,’ but what does that really mean?” Howes said. “But if you say, ‘I’ve lost two jobs, my kids don’t eat dinner,’ you start thinking about how serious it is.”

Experts say Internet addiction could be especially dangerous for college communities, like Gainesville and the University of Florida, where students have the Web and other technologies readily available to them.

Despite the increasing seriousness of Internet addiction, it has not been added to the latest edition of “The Diagnostic and Statistical Manual of Mental Disorders.”

The American Psychiatric Association did, however, include a section in the fifth edition of the DSM, which discusses the “Internet gaming disorder” as a condition warranting more research before it can formally be considered a disorder.

While researchers have barely scratched the surface in their discoveries about Internet addiction, some professionals have already begun warning people about addictive behaviors online.

“Social interactions are not fake relationships, they’re real relationships,” said Raechel Soicher, a Santa Fe psychologist. “When you’re not having any others outside, then that’s an indicator.”

Marshall said he is familiar with these issues.

“At what point does it become too much to be spending online for periods of time?” he asked. “It’s amazing how 12 hours can go by and you don’t even realize it.”

Nonetheless, Marshall said he now realizes the benefits of curbing time on the Web and gaining control of an Internet addiction.

“It’s much nicer being in the real world,” he said.

Hanna is a reporter who can be contacted by calling 352-392-6397 or emailing news@wuft.org.
Previous Oct. 25, 2013 Afternoon News in 90
Next Suwannee County School District Still Facing Civil Rights Allegations 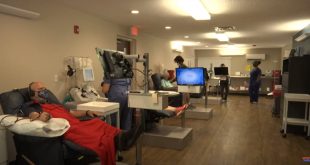