After more than a hundred years in business, Gustafson’s Dairy in Green Cove Springs closed its doors Friday.

Joe Wright, president of Southeast Milk, Inc., or SMI, said the dairy closed Oct. 11 after being bought by SMI in April 2004. Southeast Milk, Inc. is a dairy cooperative that reaches members in Georgia, Florida, Alabama and Tennessee, and markets more than 3 billion pounds of milk annually.

Wright said Gustafson’s was too small and too old to remain efficient.

Wright added there were 36 employees working on the farm. Most will be laid off.

That doesn’t mean the Gustafson milk products will be taken off grocery store shelves forever.

Wright said Gustafson’s historic brand will continue to be sold and production will shift to Southeast Milk’s Plant City location. The cooperative has another plant in Belleview.

Gary Newton, an environmental administrator for the Florida Department of Agriculture and Consumer Services, said there’s been an increase of Florida dairy shutdowns in recent years.

When Newton started working at the agency in 1986, he said Florida had more than 600 dairy farms statewide. In June, the state had 128 dairies, he said.

No single reason is behind the shutdowns.

Newton said over the past few years there’s been a nationwide increase in feed prices due to the battle with corn coming out of the Midwest and an ethanol mandate put on fuel.

He said fuel companies are battling for corn, which increases the crop’s price. Because corn is one of the main staples for dairy animals, it becomes expensive to feed cattle.

Also, an increase in diesel prices, he said, makes the transportation of cows and milk products more expensive.

“The price of milk fluctuates – it’s like a rollercoaster,” Newton said. “At times it’s really good and other times it’s tough. Some of those dairy men are able to weather out the storm, and others are not.”

Southeast Milk, Inc. representatives also said the plant shutdown was due to a “change in consumer base.”

Mary Sowerby, an IFAS regional dairy agent, said changes and increases of competition in the beverage market has taken a hit on liquid milk sales.

She said consumers now purchase drinks such as soda, sports beverages and juices instead of milk. She added that milk is more difficult to store because it requires refrigeration and can be a hassle for consumers.

“There’s definitely been a downturn and it’s been going on for years with the consumption of milk — that’s a sad fact,” Sowerby said. “People are drinking more Cokes, soft drinks and sports drinks. Unfortunately, they are getting away from milk stuff, which is why we have a country that is way overweight.”

Newton said the changing trends and consumer tastes in society have made an impact on the industry.

“For the last several years, it has been no secret that there has been a move to more low-calorie beverages and things like that, which is why your low-fat, reduced-fat and skim milk products are taking the sales of whole milk over the years,” Newton said. “But they are competing with your soft drink companies for beverages. It’s a very tough market out there.”

Research from Amber Waves of the USDA Economic Research Service stated that since 1970, per capita consumption of fluid milk has fallen from almost 1 cup to 0.6 cups per day. She reported this was due to differences in eating and drinking habits of older and newer generations.

Newton said while there has been a decrease in the number of dairies in Florida, the number of cows in production has pretty much remained the same. He said this was because the dairies that remained in business increased their herd size.

As many as five hundred cows lined up for milking at North Florida Holsteins. 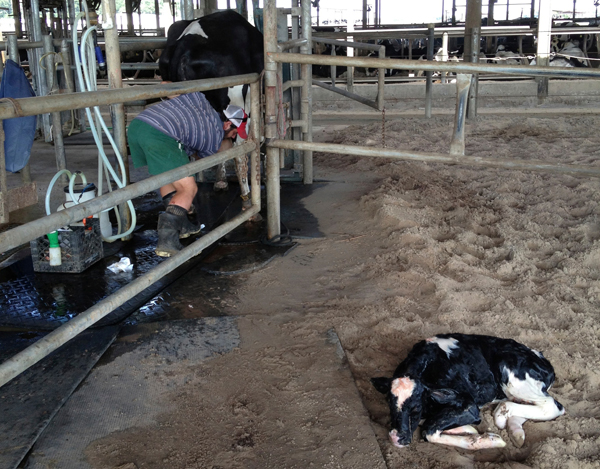 A newborn cow at North Florida Holsteins in Bell; this calf and others are often bred for optimized milk production.

Heather is a reporter who can be contacted by calling 352-392-6397 or emailing news@wuft.org.
Previous Why Are All Those Scarecrows In Keystone Heights?
Next Oct. 16, 2013: Afternoon News In 90