By Ethan Magoc and Yancey Cook

Updated, Monday at 3:15 p.m.: Graham Hill and Ian Conrad, the plane’s pilot and passenger, have been discharged from UF Health Shands Hospital.

Meanwhile, the Alachua County Sherrif’s Office is busy collecting data to give to the Federal Aviation Administration and the National Transportation Safety Board to assist with the crash investigation during the government shutdown.

The shutdown shouldn’t pose too much of a delay in the investigation, according to Lt. Todd Kelly of the Alachua County Sheriff’s Office.

“This type of accident generally can take 6 to 8 months to complete,” Kelly said, “so if there’s a 1 to 2-week delay or however long it may be, it’s a minor delay in the whole process.”

The main focus of the investigation for the Alachua County Sheriff’s Office, he said, is to gather “pictures, flight logs, any documentation that is required on the aircraft.”

The sheriff’s office has been pushing for a limit on air traffic during football games ever since 9/11. Lt. Kelly said the crash could give law enforcement enough of an argument to push through a change.

“The safety of thousands and thousands of people would certainly outweigh advertising for whatever banner is being flown over,” he said.

According to Kelly, the FAA and NTSB may not investigate this situation further because there were no deaths, and it was a small advertising plane — not a large commercial aircraft.

“Usually FAA and NTSB don’t respond to incidents like this,” he said. “Our normal protocol is that our chief pilot would collect that data for them on any other given crash regardless if there’s a shutdown or not.”

Updated, Monday at 12:40 p.m.: Lauren Rautenkranz and Brittany Bassler of WUFT News were on scene Saturday at the location where the banner fell.

It was a McDonald’s banner, not GEICO, as WUFT and other outlets originally reported.

Here are photos of the banner and houses where it landed on the 1900 block of NW 4th Avenue, about one mile as the crow flies. 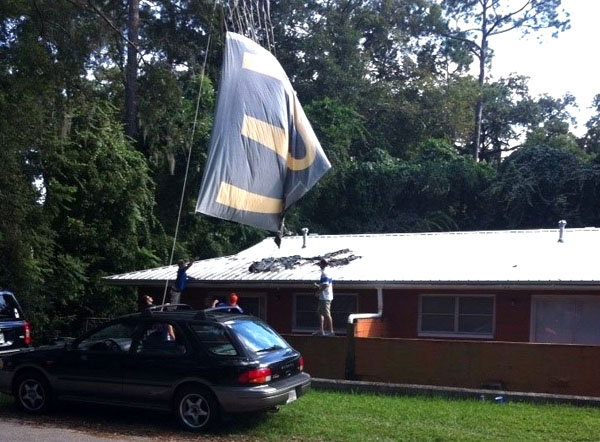 The McDonald’s banner fell over the 1900 block of NW 4th Avenue in Gainesville (Photos courtesy of Scott Marshall). 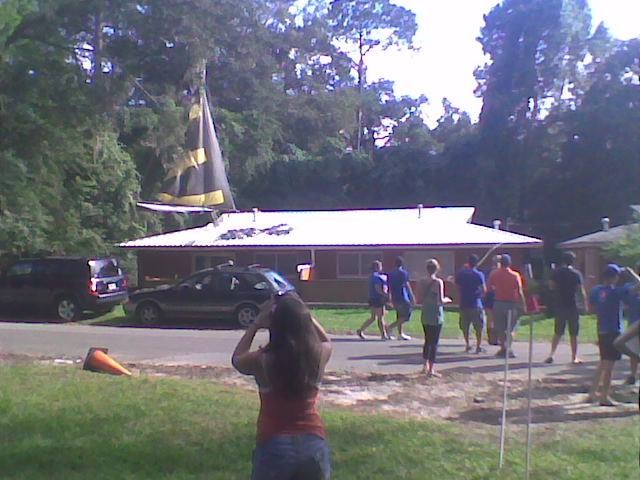 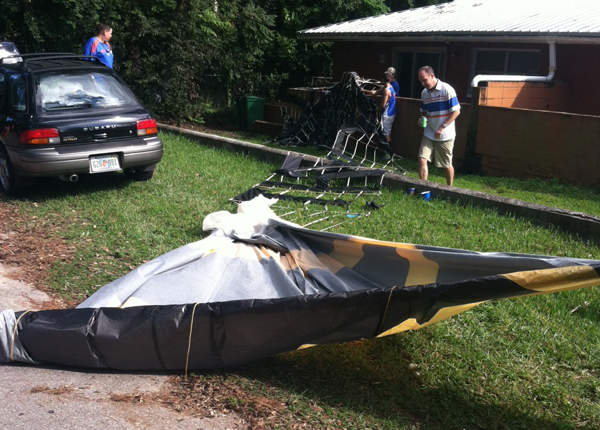 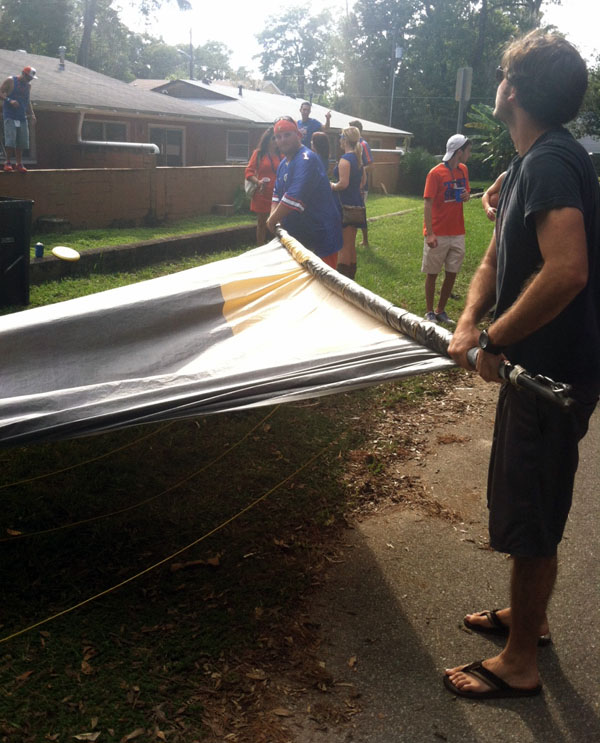 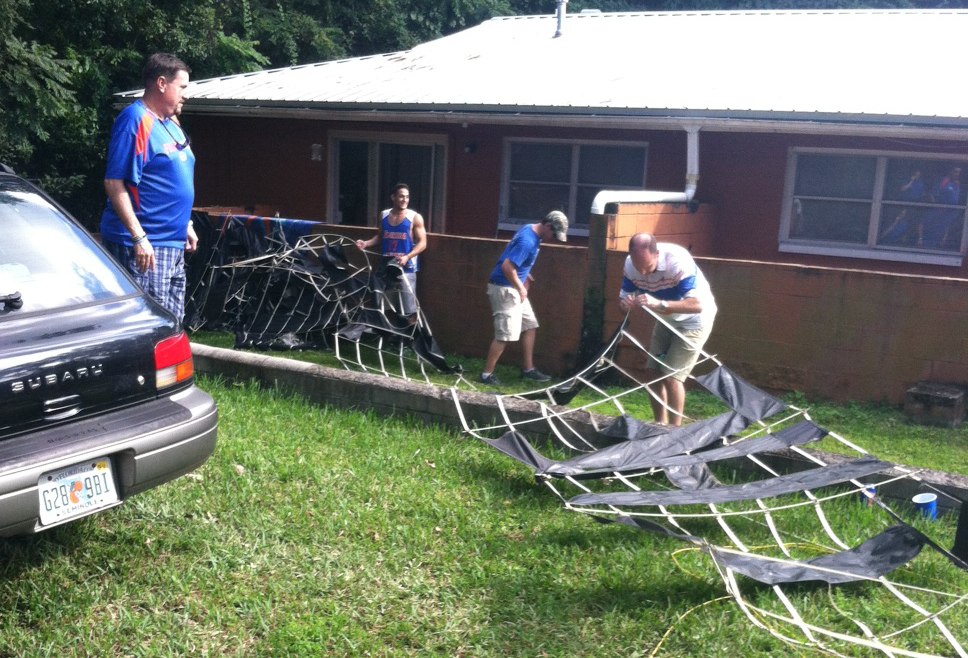 Updated, Saturday at 11:06 p.m.: A WUFT News crew gathered this raw footage in the hour following the crash.

Authorities also released the names of the pilot and passenger in Saturday’s crash: Graham Hill, 28, and Ian Conrad, 26, respectively. This wasn’t the first strange flying accident Hill has been involved in, according to a January 2013 report by First Coast News. 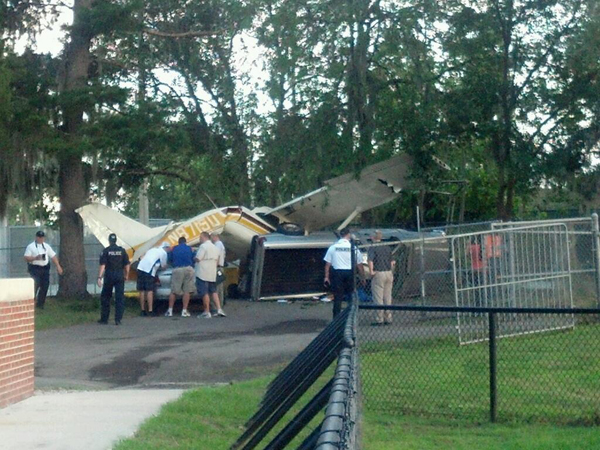 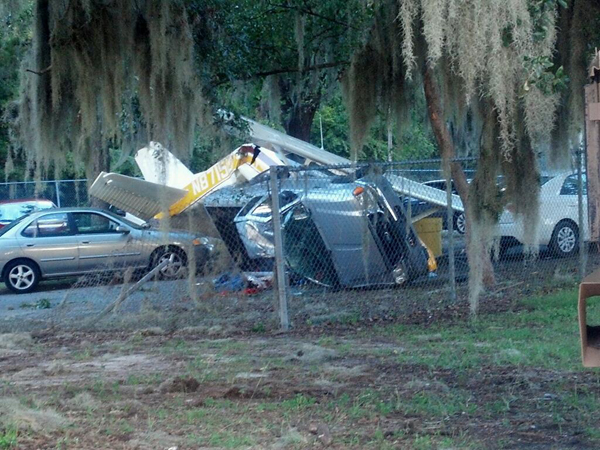 Updated, 5:52 p.m.: A photo from WJXT reporter and WUFT alumnus Kyle Sieg confirms the plane landed on a vehicle.

Updated, 5:43 p.m.: Jessica Booker, a nurse at UF Health was sitting at Flavet as the plane came down.

The plane’s motor was not running, Booker said.

“It wasn’t going to stop, and then it hit the tree,” she said.

A Gator fan, Cindy Strube, provided this account of what she saw as the plane came down.

UFPD Chief Stump says plane landed on a parked vehicle. She says no one was inside the vehicle pic.twitter.com/XufKgmDcGO

Updated, 5:16 p.m.: Karen Buffey, of Bartow, said she watched as the plane descended. She wondered if it was trying to land in the field, then noticed it was coming down too quickly.

For fans at Flavet, all had returned to normal about an hour later.

Regarding plane crash report – no changes to game schedule. 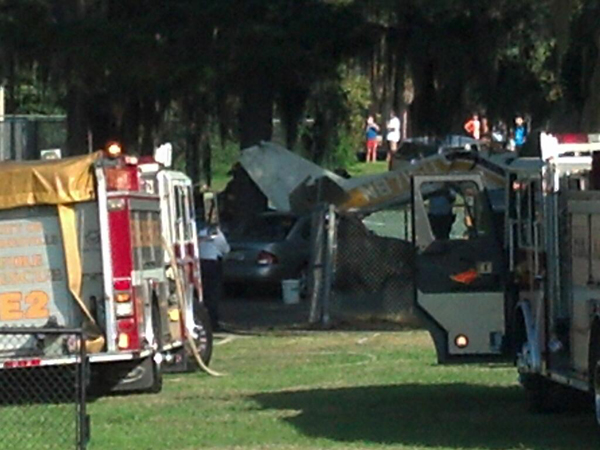 A plane crashed behind the University of Florida’s Flavet Field on Saturday afternoon at 4 p.m.

Multiple witnesses at the scene say the crash was quiet, likely indicating a low fuel issue. After the crash, all were reported safe, including the pilot.

The plane bore tail number N8715U and is registered to Beach Banners Inc. of Jacksonville, according to Flight Aware.

“I’m trying to get ahold of the owner and am not going to comment right now. I’m sorry, I just can’t talk to you,” an employee there said by phone Saturday around 5 p.m.

(1 of 2) UF Alert Update on earlier, small plane crash @ Flavet Field. No injuries on ground. Two pilots were ejected and taken to hospital.

Correction appended: A previous version of this story and its headline reported via WCJB TV20’s Kassidy Hill that the plane towed and dropped a GEICO banner ad. WUFT News later reported it was actually a McDonald’s banner. We apologize for the confusion.