By Jeanna Arroyo and Kathryn Bonti 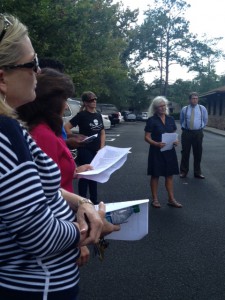 Protestors wait to share their concerns about the current government shutdown and Rep.Ted Yoho’s (R-Fla) involvement.

Local protestors met Tuesday at Congressman Ted Yoho’s (R-District 3) Gainesville office to share their frustrations over the government shutdown which placed over 800,00 federal employees on furlough.

A group of about 15 veterans, federal employees and concerned citizens gathered to discuss the shutdown’s impact, including Jeremiah Tattersall, a staff member at the North Central Florida Central Labor Council.

“(Politicians) are holding the American economy and the American government hostage,” Tattersall said. “They are doing that because they have no legs to stand on.”

Some shared concerns that the shutdown would cause delays in veteran’s claims and benefits.

Elizabeth Weilacher, a veteran and steward with the American Federation of Government Employees, read a statement for Yoho and “other politicians playing partisan politics on the backs of federal workers.”

Weilacher said the shutdown was a failure on the part of elected officials to pass the budget and questioned why the Affordable Care Act was causing the delay.

“To hold federal workers hostage and use us as bargaining chips in a political agenda is simply an abuse of their position,” Weilacher said.

Kat Cammack, Yoho’s chief of staff, was present for the protest and said several staff members had been affected by the furlough. She said Yoho was working to reach a solution.

In a press release Tuesday, Yoho said the continuing shutdown was due to the Senate’s refusal to discuss resolutions. He urged Senate majority leader Harry Reid (D-Nevada)  to “act in the best interest of the American people and come to the table.”