The Florida Department of Transportation (FDOT) is one step closer to completing a road improvement project between Interlachen and Hawthorne.

Officials discussed the final plans to renovate the remaining segment of State Road 20 at a public hearing on Sept. 12.

The project is estimated to cost $158 million and is scheduled to begin construction in 2016.

FDOT has been working for 25 years to create a four-lane, high-speed roadway to connect the east and west coasts of Florida, according to Gina Busscher, an FDOT spokeswoman.

The 12.2-mile segment of State Road 20 between County Road 315 in Interlachen and U.S. Route 301 in Hawthorne is the last section of a three-part road improvement project to increase driver safety and transportation needs in the area.

State Road 20 is a primary commuter route for residents in Putnam and Alachua County to the Atlantic Coast, she said. The road also acts as an evacuation route for Flagler and St. Johns Counties in the case of an emergency, such as a hurricane.

Therefore, the roadway has high traffic volume and is easily congested, and Busscher said the route operates below the desirable level of service.

State Road 20 carries an average daily volume of 9,900 vehicles per day east of Hawthorne and 11,800 vehicles west of Interlachen, according to FDOT data.

By 2040, these studies predict the same location will carry an estimated average daily volume of 20,900 vehicles east of Hawthorne and 19,500 vehicles west of Interlachen.

Busscher said widening the highway from two lanes to four would help accommodate the predicted demand for traffic.

So far, two sections of the roadway have been widened, she said.

“The (increase to four lanes) that has been done in Putnam County has led for freer passage of vehicles in that area,” Crews said. “Certainly you can imagine that road when it was two-laned, it prevented efficiency.”

Busscher cited safety as another reason for the project.

Studies have shown the remaining segment of State Road 20 averaged more than 40 crashes a year between 2006 and 2011, higher than the statewide average for similar roadways. Many of these crashes are attributed to sight distance problems associated with numerous hills and curves in the road.

FDOT waited on widening the 12-mile-long section because it didn’t handle as much traffic as other roadways and therefore wasn’t a priority, Busscher said.

The overall project for just this portion of the road will cost about $158 million, she said. This includes about $101 million for construction, $34 million for right-of-way costs, $16 million for design and $7 million for wetland mitigation costs.

FDOT only has the $16 million it will cost to renovate the stretch that falls in Alachua County, she said.

Funding wasn’t the only issue postponing planning of the remaining section of the project. Environmental and sociological issues have been raised in the past and were addressed at the Sept. 12 meeting.

The area between Interlachen and Hawthorne is home to many wetlands, prairies and lakes. Many fear the widening of the road would negatively impact animals and the environment.

FDOT conducted many environmental studies and developed solutions to minimize the impact the roadway would have on the local environment, Busscher said

For example, the transportation department installed wildlife crossings under the roadway and fences along the side of the road to protect animals.

Department officials said FDOT will contact property owners and compensate for their losses by giving them fair market value for their property.

A memorandum of agreement between FDOT and the Florida State Historic Preservation office was signed in 2011 to ensure preservation of the four remaining historical houses.

One of these houses includes the property of Frances Whittier, who owns a vernacular, Queen Anne-style Victorian home located at 440 Atlantic Ave. in Interlachen.

Whittier said her house was built around 1885. After buying the property in 1997, Whittier extensively renovated the home and lived in it for 11 years before moving.

FDOT was required to hire the Southeastern Archaeological Research Inc. to conduct a study and handle the relocation of the historic house. The city will pay for the its relocation costs, she said.

While Whittier, who’s also the president of the Historical Society of Interlachen, spent years battling officials on the issue, she said she’ll go along with what the department proposes.

“People in the town hall think, ‘Oh, it’s a junky old house,’ — that’s how it’s been characterized,” Whittier said. “They don’t give it any importance or value. “

If her little piece of history does get taken away, Whittier hopes it can be used for a good cause, such as converting it to a community center for public use.

While the issues were discussed at the public meeting, Busscher said the public has a period of 30 days to address any concerns or make any suggestions to FDOT’s plans are put into action.

Renee is a reporter for WUFT News who may be contacted by calling 352-392-6397 or emailing news @wuft.org
Previous Florida Home Sales Rise, Alachua County Follows Suit
Next It’s Now Really Easy To See Most Florida Public Officials’ Net Worth 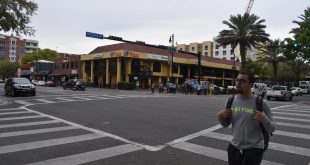 Gainesville commissioners unanimously voted to approve it on a re-advertised first reading. A second reading is set for Dec. 3.